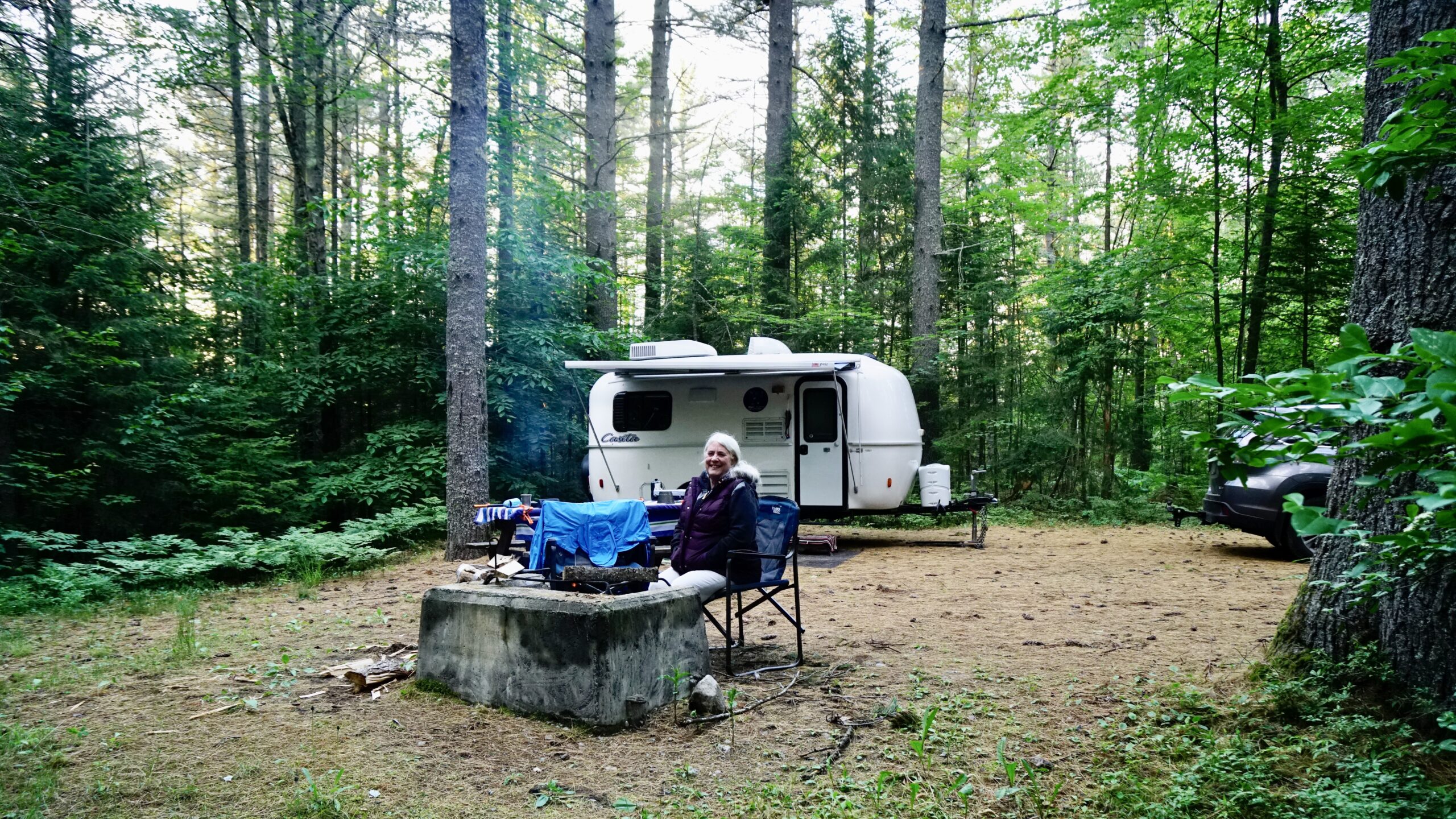 June 18, 2022. Internet has been a real challenge thus far. I write and upload when I am able, but not enough to satisfy the urge.

The last two nights we camped on Wellesley Island, in the Thousand Island region of New York, looking out onto Canada across the St. Lawrence River.

There must literally be a thousand islands, and any large enough to fit a house…

We have been told that in order to be considered an island there must be at least one tree, and through the course of a year the island must remain above water. In the absence of those two qualifiers it is deemed a shoal.

Hot and muggy transitioned into falling temperatures and rain, but not before I enjoyed a solitary 5 mile hike along the coast.

At one point Canada was literally a stone’s throw away.

At another I encountered a few glacial “pot holes”.

These curious features are circular impressions “drilled” into solid rock. Over thousands of years rushing meltwaters occasionally cause stones and debris to whirlpool over a single location, gradually eroding a downward tube into the rock. One of the pot holes I saw was 3 feet across and reported to be over 15 feet deep. It was full of water, leaves, and dead stuff. Out of concern for the safety of hikers its opening was covered in protective metal screening,

This morning we awoke to temps falling from the 50’s into the 40’s. A bone chilling drizzle persisted throughout the day.

We are camped for the next 3 nights at Buck Pond, a wonderfully primitive campground located in the northern reaches of New York’s expansive Adirondack Park. Temps have continued to fall into the 30’s and threaten to freeze water overnight. A campfire is not so much a want as it is a need.

Nevertheless, the absence of biting insects, the skyscraper pines and the endless carpet of soft pine needles is salve for the soul and senses. We are content.

Tomorrow is a milestone. 45 years ago we each said “I do!”. Among other things we promised to love, honor, and respect each other. We have kept those promises as humans do, imperfectly. What matters most is that we continue working to perfect our efforts at marriage. We will seek an appropriate dining venue about 20 miles away in Lake Placid, famously host of the 1932 and 1980 Winter Olympics, for our celebration of life well lived together, and Father’s Day.

On the road today we trolled radio stations, seeking the right station for our mood. In the process we briefly paused on a talk-radio channel that caught our attention. The male “shock-jock” was waxing inelegantly about the “virtues” of womanhood. To us he was deeply offensive. I will only share the least inappropriate “joke” that he recited: “What does one shout if a man on a ship falls overboard… MAN OVERBOARD! What does one shout if a woman falls overboard… FULL SPEED AHEAD!!”

It takes some intelligence to host a radio talk show. I wondered, did he really believe what he was saying, or was the station’s business model requiring that he play to the perceived audience of Neanderthals? I doubt that he could have gotten away with such off-color “jokes” aimed at Jews, people of color, veterans or Christians. Certainly not guns, pickup trucks or hunting dogs. Why are women as a group acceptable targets of such insult?

I once read that it is difficult to hold on to dark negative thoughts if one expends their best effort to maintain an honest smile. Just as the face reflects ones mood, there is some indication that facial expressions can actually influence ones mood.

If the “shock-jock” believed that what he said was funny then did he come to the belief because he was required by his job to say the words, or did he say those words because they reflect his personal beliefs? Did thought induce the words or did the words induce the thoughts. It’s like that old saw, “What came first, the chicken or the egg?” Corrupting that phrase in the context of the radio DJ, “What came first the chicken shitting or the chicken’s shit?”