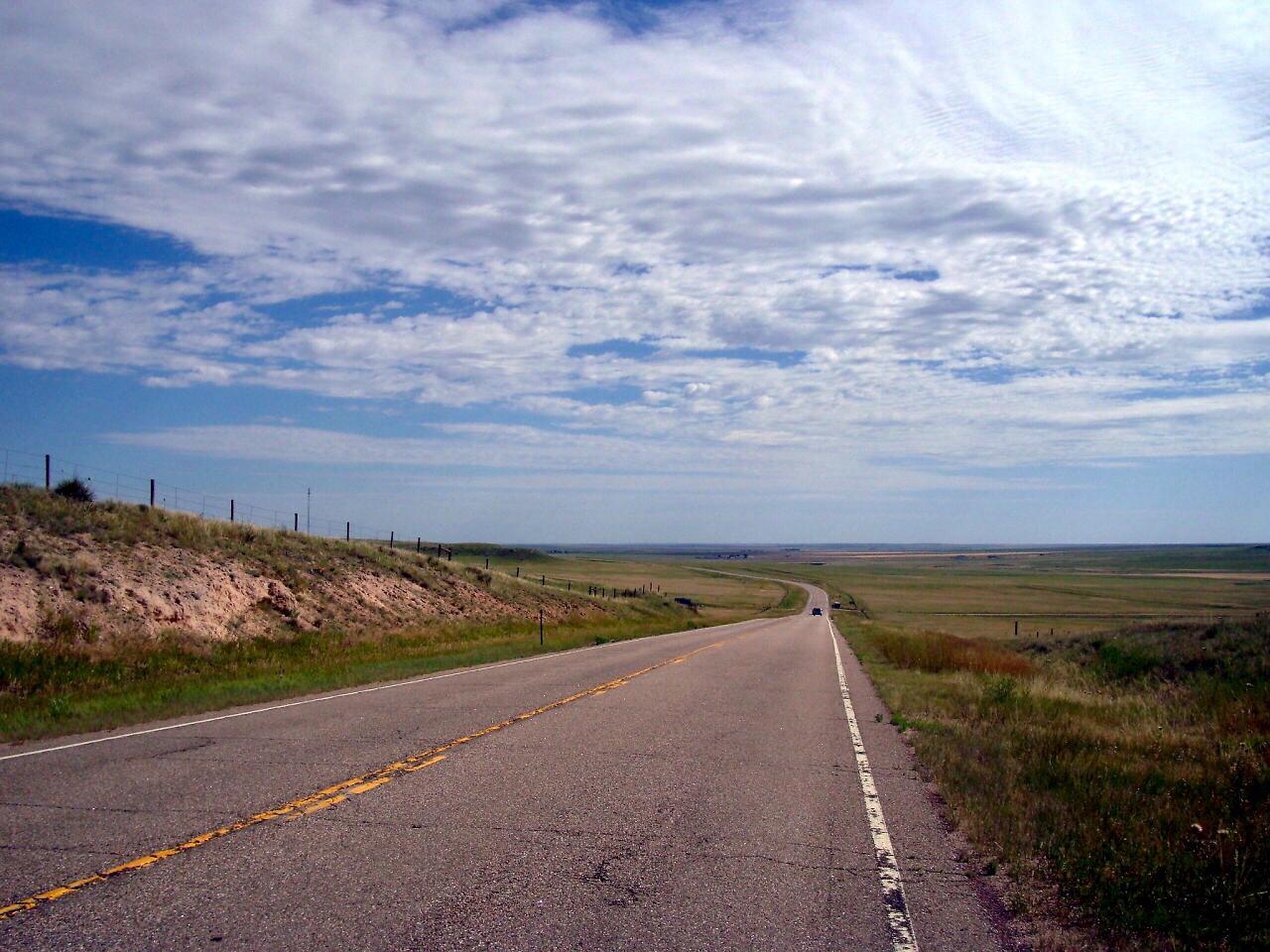 July 12, 2010 was hot riding into Smith Center Kansas. No, not just hot, but HOT! So hot that the roll of my bicycle tires gave the continuous sound of separating Velcro on the sun-beaten asphalt. So hot that colors appeared bleached by the arc-welder brightness of the midday sun. So hot that… well, you get the point, and after 60 miles on the bicycle, so did I. Christine and I went into the old downtown to seek a diner.

Downtown Smith Center is not dead, but like many small town historic business districts, it is not well. The two and three story brick and stone buildings harken to a time when a name and year of “birth” were prominently displayed at the top and on the cornerstone. There was the Shite Building, 1888, and The First National Bank building, “Founded 1886, Erected 1930”. That was a tough year to build a bank, but The First National Bank had apparently weathered the adversities of the Great Depression. Faded paint indicated some of the long-gone businesses. Much of the former commerce has been replaced by antique and second-hand stores. The bank facade informed us that it was 2 p.m. and the temperature had fallen to 101.

We ate at the Second Cup Café, where $6 can still buy you tenderloin with all the trimmings, and a piece of homemade pie… Apple, with Maple flavored crust, fantastic! A patron asked if we were with “the cycling group”, and after a pleasant discussion with her and the café owner, she smiled and gave us a $5 donation and a “God Bless You”. We left the café and were again assaulted by the wall of heat. Across the street I saw a small faded barber’s pole mounted next to the door of a timeworn storefront, “Paul’s Barbershop”. It had been over 6 weeks since my last haircut, and curiosity got the best of me. I crossed the street to peer in the window. Over the years, the glass had lost its clarity, etched by countless dust storms. I shaded my eyes against the glass in order to see within. I beheld not just a barbershop, but a living “barbershop museum”, with one of our cyclists, Jeremy, in the barber’s chair.

We entered the shop. It was a “three chair store”, each of which was a creature of cast iron, nickel, porcelain and leather dating to the late 19th or early 20th Century. Jeremy was in the center chair, but what immediately drew my eye was that the chair to the left was a fully functional barber’s chair in miniature. It was the perfect size for a 5-year-old and elevated to the perfect height for Paul the Barber. This tonsorial “throne”, fit for any young prince, differed from its larger brothers only in the absence of the long leather razor strops which hung from the full-size chairs. “Atmosphere” in the shop was provided by a mahogany encased, single dial radio that still used vacuum tubes. The counter displayed bottles of men’s grooming products such as Vitalis, Krew-Kut, Hask Hair Tonic, and other brands that I had thought long extinct. Behind the counter was a very old ornate white and chrome cash register, the kind that shoots little metal “tombstones” up at the sound of a bell to announce the amount of the transaction. I would soon learn that the register remained in use. Then there was Paul, the shops sole proprietor.

I suspect that in Paul’s younger days he might have been 6 feet tall, but 7 decades and bending over countless heads of hair had taken their toll. As he focused his attention on cutting Jeremy’s hair I noticed a tremor in Paul’s hand that seemed to stop just at the moment the clippers reached their destination. Barbers are observant, and Paul was no exception. He seemed to read my mind and commented in a matter of fact manner that he had suffered a stroke but was able to pursue his calling after only 6 months of recovery. Paul was confident of his skills to the point that he made jokes, “If I make a mistake, the hair will just grow back” … “If you want your cut fixed you can always ride your bikes back here”. Paul and I were amused, but I sensed that Christine preferred that I leave my hair to other hands.

Paul put the finishing touches on Jeremy’s hair-cut, and with practiced mastery removed the barber’s cape, shaking the clinging hair to the floor. “That will be nine dollars”, Paul announced. Jeremy and I both must have displayed a micro reaction because Paul then followed up with, “I could do it cheaper, but only if you fellows pay my bills.” It has probably been over 30 years since I had a $9.00 haircut, and here Paul had assumed we were suffering sticker shock!

My turn in the chair. Paul went to work as a craftsman should, with calm practiced confidence. We talked as he cut. “So, you fellows are Catholic. Well, I’m Lutheran, which is kind of watered down Catholic, you know, not as complicated.” He stopped and chuckled. “Was a time there weren’t many Catholics in this area, but there are sure a lot of them now”. He was making a matter of fact observation. There was no animus meant.

I asked Paul for a recommendation for a dinner restaurant. “Well, I prefer to eat at home with Mom (his wife), but I suppose if I had to eat somewhere else it would be Duffy’s, downtown here.” Later we ate at Duffy’s, and Paul’s recommendation was spot on.

I learned that Paul and his wife had celebrated 50 years of marriage in June. They had two daughters, a son, and one grandson. This was his second barber shop and he had been cutting hair in this shop since 1962. He confirmed that the chairs, register, and fixtures predated his arrival by decades. Paul became serious. “There have been a lot of people who have offered to buy my chairs, cash register, and other things.” He continued, “Mom” and me talked about it, but it’s just not right, the shop is my business, my life.” Paul just couldn’t see parting with it piecemeal. With sadness he remarked that in front of the shop there once stood a tall barber’s pole that was as old as the shop itself. About 8 years ago some fellows passing through town wanted to buy it. Paul politely declined to sell. “I was in the shop Saturday, and by Monday the pole was gone. Someone stole my barber pole”. Paul didn’t blame “those fellows”, or anyone else. He just remarked with sadness, “Maybe someone just needed it more than me”.

“What do you think?” asked Paul. “About the barber pole?” I replied. “No, the haircut! Is it ok?” I smiled and looked in the time worn wall mirror. There was a white skinned border that now separated my bicycle tan from my shortened hairline. “Paul, it looks great!!!” Paul beamed and said, “That will be nine dollars.” I gave him a ten… “Please keep the change”. His smile broadened, broken only by the word, “Thanks!”

As I left the shop I considered that my ten dollars had purchased more than a haircut. I had enjoyed a moment in the life of a very good and extraordinary man. Smith Center had the fortune of Paul’s good will for over 50 years and “Mom” had enjoyed his love and company for over 50 years. How rich the community, and how rich was his family. My 15 minutes in his chair were priceless. I wish that I could take my grandchildren there. You know… the experience of that small tonsorial “throne” fit for a young prince or princess. I wonder if children’s haircuts are also nine dollars. Let’s see, that would be $90.00 plus the tip… What a bargain!

A sad update to my reflections on Paul…