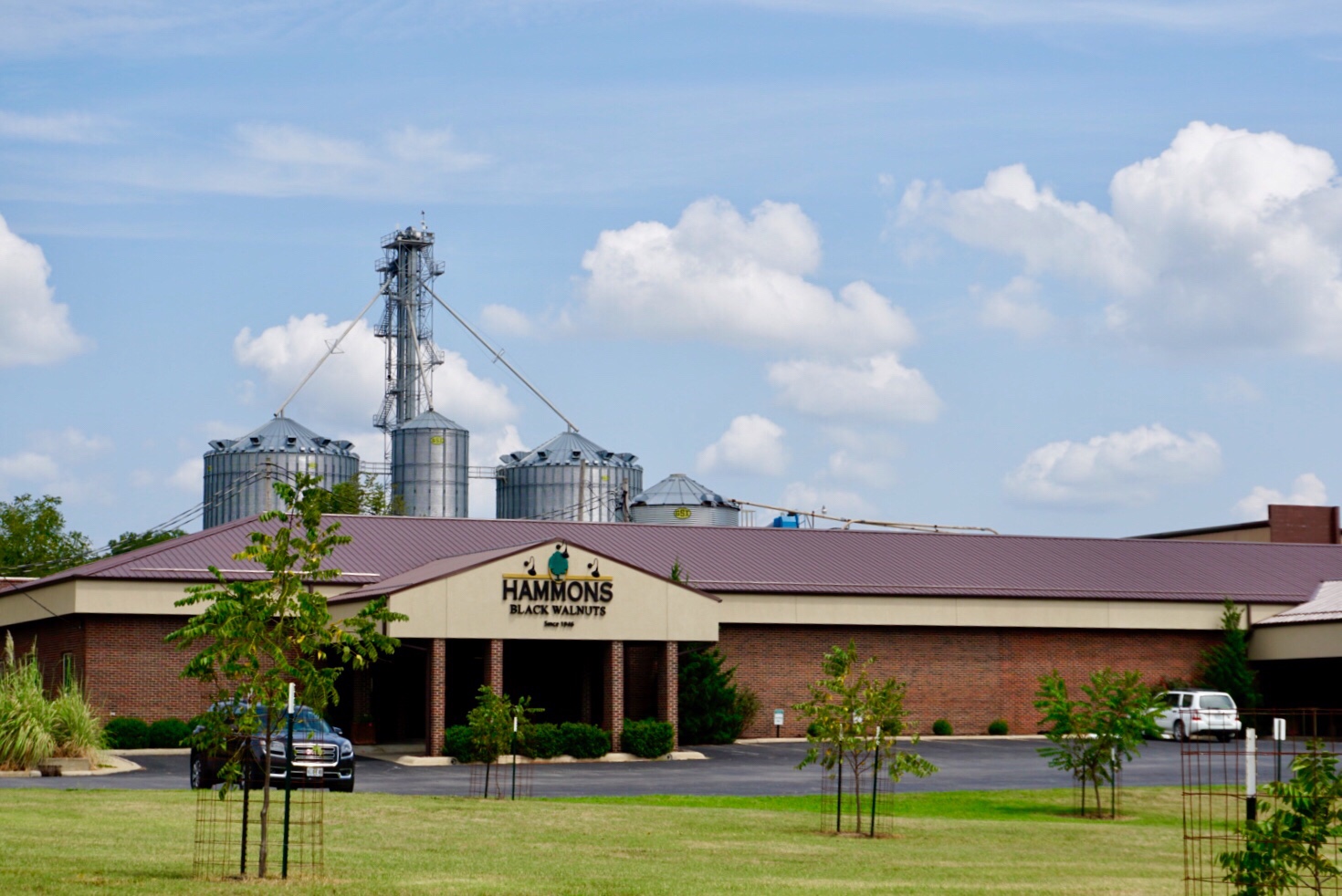 A fellow camper at Stockton Lake mentioned in passing that the nearby town of Stockton was the world’s largest producer of Black Walnuts. I was somewhat skeptical since Stockton has fewer than 2,000 residents and is remote from any major highway system. With some free time on my hands and the promise of air conditioning in my SUV on a humid 90+ degree day I went into town to explore.

It did not take me long to find the tall silos that marked the location of the Hammons Products Company. Founded in 1946 by grocer Ralph Hammons, the firm is now operated by his grandson, Brian Hammons.

I entered the company offices which were clearly purposed for business and not itinerant campers like me. I was disappointed to learn that tours are available only once each year in September. However, the receptionist invited me to view a brief promotional video in their company conference room. I eagerly accepted. At the conclusion of the 5 minute video the Company’s President, Brian Hammons entered the room and introduce himself. He graciously took time from his day to tell me more about Black Walnuts and the Hammons story. Brian Hammons is center in this image from the Company’s website, https://black-walnuts.com

Indeed, the Hammons Company is the worlds largest producer of Black Walnuts, processing over 25 million pounds each year! Brian was quick to point out that English Walnuts are distinctly different and that production of the English variety exceeds 500,000 TONS annually! He then went on to distinguish the two varieties and highlight the virtues of the American Black Walnut:

2. Most Black Walnuts are sustainably harvested in the wild unlike the plantation grown English Walnuts.

3. Black Walnuts are universally acclaimed as superior for their deep, rich, and bold flavor. They are also nutritionally superior to their English cousin.

While only 7% of the walnut seed finds its way into the mouths of hungry consumers, the other 93% is processed into environmentally friendly abrasive products that are sought commercially for such varied purposes such as polishing delicate musical instruments, water filtration media, surface “sand” blasting , and oil field machinery maintenance.

Most remarkable for me was the method of harvest. Each year in the Fall, over 200 gathering stations are set up across 15 States. Thousands of gatherers comb the forests and hand harvest the wild Black Walnuts, delivering them to the gathering stations where the green outer covering is hulled. The remaining intact nut is then delivered to the Hammons factory in Stockton Missouri for further processing.

While Black Walnut production is firmly tied to its early American roots, the Hammons Company has reached out into the 21st Century. Improvements in processing methods have increased efficiency. Selective improvements in Black Walnut plant varieties are creating trees that bear fruit with thinner shells and proportionally greater nut meat to shell ratios while retaining the unique taste profile. Thus the potential for enhanced profitability is attracting landowners who are seeing financial rewards in planting these improved cultivars.

I really appreciate the time that Brian took today to educate this wandering (and wondering!) camper.

PS: Here are a few of the products that are supplied by the Hammons Company. If you look closely you will see one of my favorites from Kansas City’s own Boulevard Brewing Company!