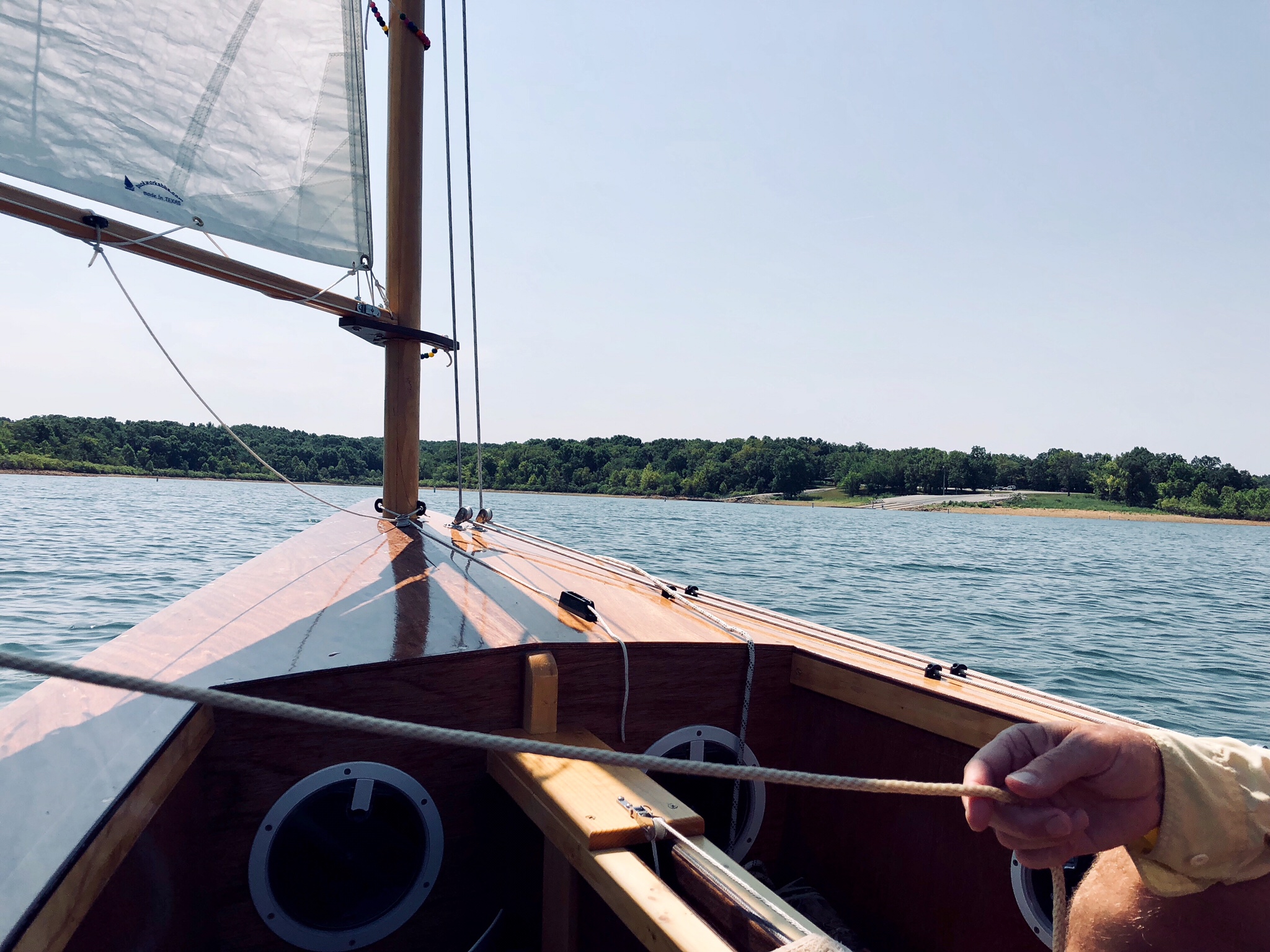 It has been nearly 10 years since I last held a sailboat’s tiller or adjusted a main sheet. Today Craig from the nearby town of Stockton took me out on the lake in his homemade 14 foot gaff-rigged catboat.

It was a dangerous passage, not in the sense of sailing conditions or personal risk, but because I felt perilously close to being once again bit by the urge to sail. My thoughts processed through the possibilities… we have an empty garage bay… a small sailboat would be easy to take out when the whim strikes… Christine’s Highlander has a hitch and tow package… is it legal to tow a camper that in turn is towing a boat? OK, that last one is a bit over the top, but I have actually seen it done… most recently while traveling from Kansas City to this campground.

The idea of another sailboat is appealing but not practical, especially with the evolving plans that we have for the rest of this year and 2019. There may come a day for another sailboat, but not right now.

Before I get to next year: Once the celebration of Christine’s father’s 100th Birthday is in the books we will be packing “Rigel” for a 5 week outing that will take us to Michigan and the shores of Lake Huron, Ottawa Canada, and then on to New England. Highlights will be a visit with my mother as we pass near Chicago, camping on Huron’s western shore, and then on to visit our Canadian friends Tom and Nanci who we met while walking from Porto Portugal to Santiago Spain last April. Of course, New England is its own special highlight. We camped there in 2016 and knew that return trips would be a must.

Later in 2019 we hope to travel back to Canada and camp in the remote Province of Labrador and Newfoundland. Nanci and Tom have expressed an interest in a one-week Fall cruise from Montreal to Les Îles de la Madeleine. It is an idea that intrigues us. The “cruise ship” is actually an ocean going ferry with spartan accommodations by typical cruise ship standard. The destination is an island archipelago located where the Atlantic Ocean meets the St. Lawrence seaway. These small islands sit upon an ancient salt dome. European explorer Jacques Cartier landed there in 1534, hundreds of years after the Mi’kmaq First Nation people had made the islands a seasonal hunting ground. Some modern inhabitants trace their ancestry to sailors marooned as the result of the hundreds of shipwrecks that have occurred on the islands shores.

Here is a link to the cruise company website:

Well, I have danced around and thus avoided talking about what I consider the most captivating “Next Thing”. It will take place in April, 2019 and it deserves a separate post. However, I will leave off with a picture that more than hints at what is coming.