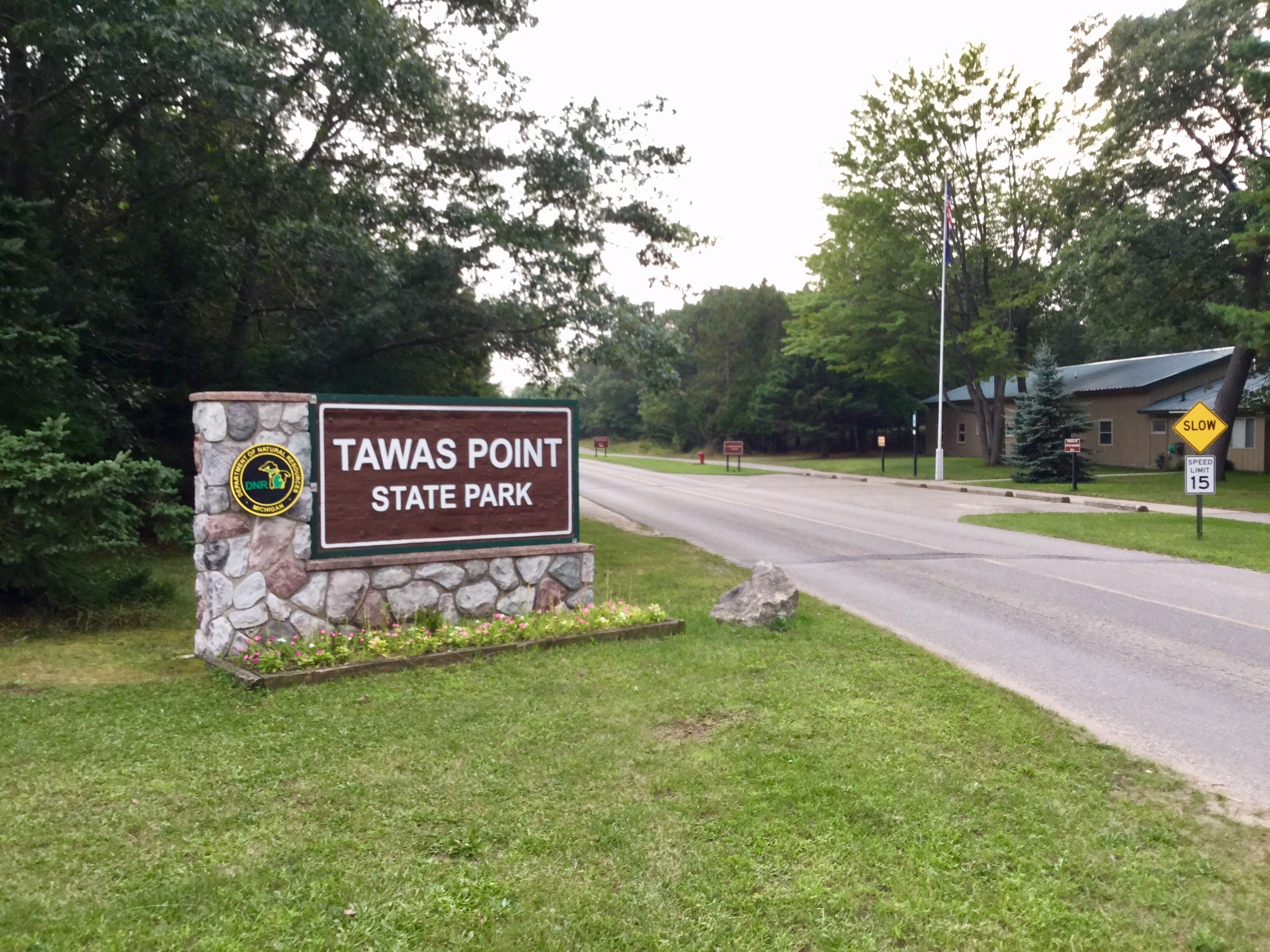 This is our second night in Michigan on the western shores of Lake Huron. Our first night was at Bay City State Park, and we will be spending the next 3 nights in Tawas Point State Park. Both parks are well kept and very family friendly (lots of kids having lots of fun!). As nice as Bay City was, Tawas is spectacular. We were fortunate to reserve one of the shore side camping spots.

A nice bathhouse is a short walk away, and we find ourselves sheltered beneath established Oak and Maple trees. 75 feet out of our door is Lake Huron. Since the park is located on a sandy spit the entire shoreline is gently sloping prime swimable beach front.

A short walk from our campsite is the Tawas Point Lighthouse.

The original light station was built in 1852, but quickly became irrelevant as accumulating sands “moved” the lighthouse inland. The replacement light station, built in 1876 was also constructed on an island, but as you can see it is an island no longer. It was decommissioned in 2014 and replaced with modern optics and a solar powered foghorn, both located on the current point.

The 1876 lighthouse is in excellent condition and gives a wonderful insight into the life of a lighthouse keeper and family.

The lighthouse still houses its original 4th order Fresnel optics. The Fresnel lens was an early 19th Century French invention that was able to compress and focus an ordinary kerosene lamp flame into a searing beam of light. The 4th order lens could project to a distance of 16 miles. These lenses used a complex assembly of precision cut and mounted glass rings to gather and focus the light. The largest 1st order lenses stood nearly 12 feet tall and were able to reach 25 miles into the darkness!

Lighthouses are identifiable in daylight by the patterns painted on the towers, each in a region being unique. At night they could each be distinguished by the duration and pattern of light and dark, Tawas Point’s being 4 seconds “on” followed by 2 seconds “off”. Since kerosene flames could not be turned “on and off” in rapid succession, clockwork devises rotated the light or a shield is such a manner as to create the flashing effect. These day and night patterns were noted in the navigation charts. The clockwork was powered by weights on chains or cables that descended the tower as the mechanism “unwound”. It was the light keepers duty to maintain the house, tower (inside and out), the kerosene lantern, and the clockwork mechanism, keeping it wound throughout the night. The lighthouse keeper shouldered an incredible responsibility as sailers entrusted their lives, the lives of their passengers, and the safety of ships and cargoes in reliance on the lighthouses and signal horns to warn of unseen perils.

PS. Our evolving “plan” will see us spending 3 nights at Tawas Point and then one night at Port Crescent State Park to the south. We will then enter Canada on Thursday and we plant to visit our Camino friends, Tom and Nanci in Ottawa. From there we will head toward Québec City and eventually return to the States through New England.