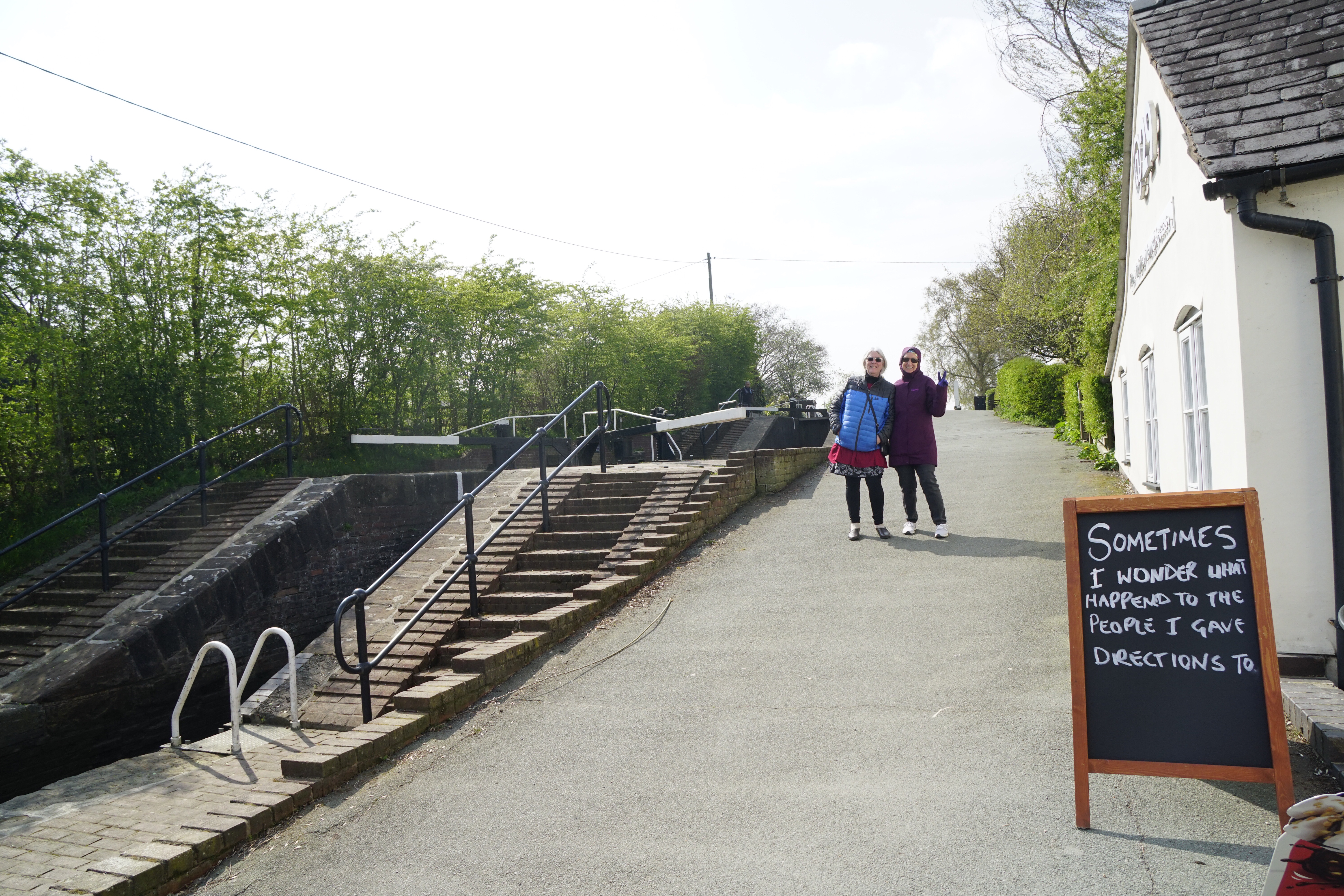 Today presented another new experience, a “Staircase Lock”. Most locks have gates at both ends that are associated only with a single chamber of water. However, some areas of the canal system require a greater change in elevation within a shorter distance. Creative engineers devised a system whereby a number of lock chambers share common gates. While this accomplishes the stated goal, it means that vessels must be better coordinated to use the system as one chamber is used to fill the next chamber in sequence.

The Grindley Brook Staircase featured 4 chambers and instructions for both ascending and descending.

As a courtesy, and to avoid unnecessary “traffic jams”, Canal and River Trust volunteers assist the narrowboat crews. From within the chambers the towering gates and cascading waters are intimidating. Christine and Kris found the lock masters to be personable and most helpful.

Once again, Kris graced us with a time-lapse video of me ascending two of the four chambers. Here is the link to her video: The Grindley Brook Staircase.

In all, there were 7 locks including the staircase at Grindley Brook. Thus it took us nearly 2 hours to navigate a few hundred yards, due in part to the queuing of our vessel with others. We tied up after successfully negotiating the passage and enjoyed coffee and a light meal at the aptly named Lockside Cafe.

The Llangollen canal is often narrow, swift (by canal standards) and quite popular. Therefore it occasionally presents congestion and some anxious moments as boaters squeeze by one another.

Today the challenges were compounded by a vicious wind that gusted to over 30 mph. The tempests willfully pushing vessels where their skippers preferred that they not go. Once, while passing an oncoming narrowboat with mere inches of daylight between us the seasoned pilot of the other vessel called out to me in his native brogue, “Tests our skills does it not Skipper?” I really wanted to employ a less than a “G” rated reply, but there were children in the vicinity.

We cruised under the pressure of the wind gusts for 5 hours when a particularly inviting stretch of canal gave us the perfect place to tie-up for the evening.

It was no accident (thanks to the Peterson Guide) that a well regarded pub, The SunInn, was a pleasant one and a half mile walk through the countryside.

We were not disappointed with The SunInn, or its wonderfully friendly customers. Our host, Hanna, treated us like we were family… and the food was fantastic! There is an old saw that says that “British Cuisine” is an oxymoron. I beg to differ. The fare that we have experienced each evening has been hearty, mouthwatering, and reasonably priced. The SunInn reinforced this impression.

We passed into Wales today. The countryside is an explosion of rolling green hills and an endless chorus of songbirds. “Old” here predates the discovery of the Americas, reaching back though the Middle Ages, the Roman Empire, the mysteries of the Druids, Stonehenge, and on into pre-history. All one needs to do is look around and be in the moment to see and appreciate.

PS: Here are a few more images of the day, and sage words found on the wall of the Lockside Cafe.