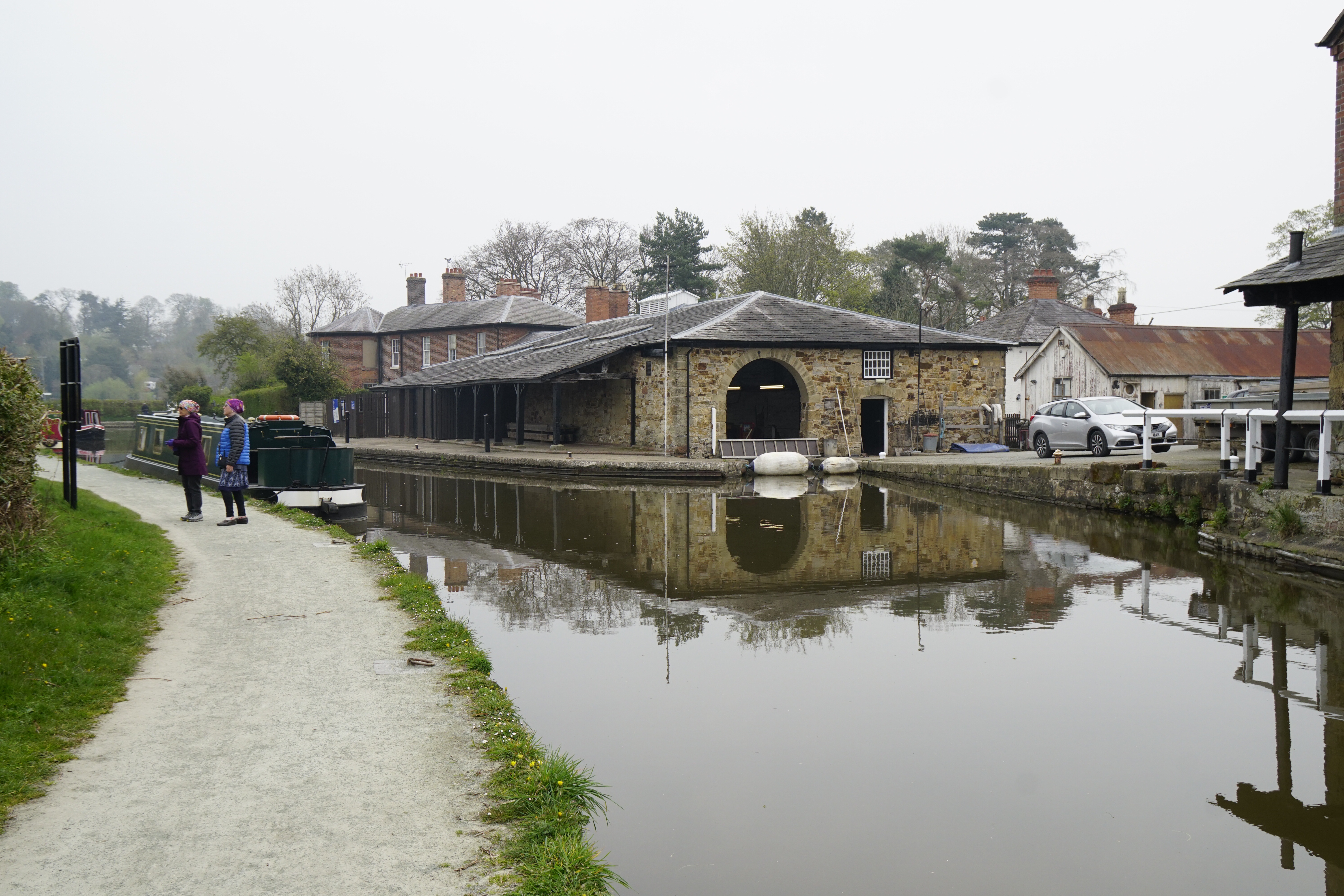 There were a number of new experiences today. First, we were underway before 8 a.m., traveling a serene canal with no other crafts plying the waters.

The songbirds were in tune with a volume that could even be heard over the sound of the diesel. One stretch opened up to us as if an enchanted forest.

Alternatively, for those of my generation there was a late 1950’s TV serial, “Journey to the Beginning of Time!” It told the story of a family adrift on a mystical river flowing back through the geological ages. There were portions we traveled today that I swear were the locations where that serial was filmed. Once again, I give thanks and credit for Kris Ashton for having the presence of mind to take and share a time lapse video of one such section. Here is the link: Enchanted Canal

New experience number two… We traversed our first tunnel. It was only about 100 yards long, and thus a good first experience. A much longer one awaits us tomorrow.

Back in the day, commercial canal boats navigated the tunnels aided by “canal walkers”. These were men who hired on at the mouths of the tunnels to propel the boats to the other end by lying on their backs aboard the boats and pushing against the tunnel walls with their feet. One wonders how many must have fallen off and drowned in the loner canal tunnels that lacked any walkway. Some of the tunnels are miles long and pitch dark.

A third new experience was navigating in the rain. Nothing really special, but notable insofar as it was neither a bone-chilling cold or a gale force wind as we have experienced the last few days. It was actually quite pleasant (see “Enchanted Forest” above).

Before I mention the fourth “new experience” I must again give praise to Great Britain’s traditional pubs, traditional ales, and wonderful cuisine. Tonight it was the “The Poachers” canal-side pub. Our good fortune was to tie-up mere feet from the entrance and to be here on Tuesday night when the featured special was rotisserie roasted chicken. Six pounds Ninety Five pence (about $9) for a half chicken, choice of sauces, two sides and choice of potato. Incredible!

Now to the “Fourth Experience” which keys into the title of this post… “So Much at Stake”.

The moorings outside of the pub had a limited number of concrete imbedded rings on which vessels may securely tie. We were not among those fortunate enough to secure one of those coveted spots. However, no worry as the boat charter company supplied two mooring pins (think large heavy duty tent stakes) and a small sledge hammer. Drive the pins in, secure the bow and stern lines, and its good to go… or so we thought.

While we were in the pub two narrowboats, traveling in tandem, passed within feet of the moored vessels at full throttle, causing havoc. Our bow pin pulled free from the bank and our vessel then swung out into the canal tethered only at the stern. I have come to believe that there is a balance struck in the Universe and for every out-of-control boating asshole there are at least 10 boating angels. Our “angels” were in the process of tying up astern of us and as they struggled to secure their vessel in the mayhem one of the crew climbed aboard ours and cast a line back to shore. When we returned to the boat I immediately noticed where the pin had yanked a large plug of turf out and where it had been driven back into the canal bank. Thank you Phil, Sue, and your two teenage children for being the right people in the right place, with the right heart to recognize… that we had so much at stake!

PS: My cell service provider has given me a warning that I have been using a LOT of data. Apparently I neglected to turn data off with regard to uploading pictures. I have remedied this, but I will now have to carefully reserve uploading my posts to opportunities where WiFi is present.

PPS: (April 17th) There were two more “interesting” encounters the following day with the two narrowboat miscreant vessels which will be mentioned in my next post.