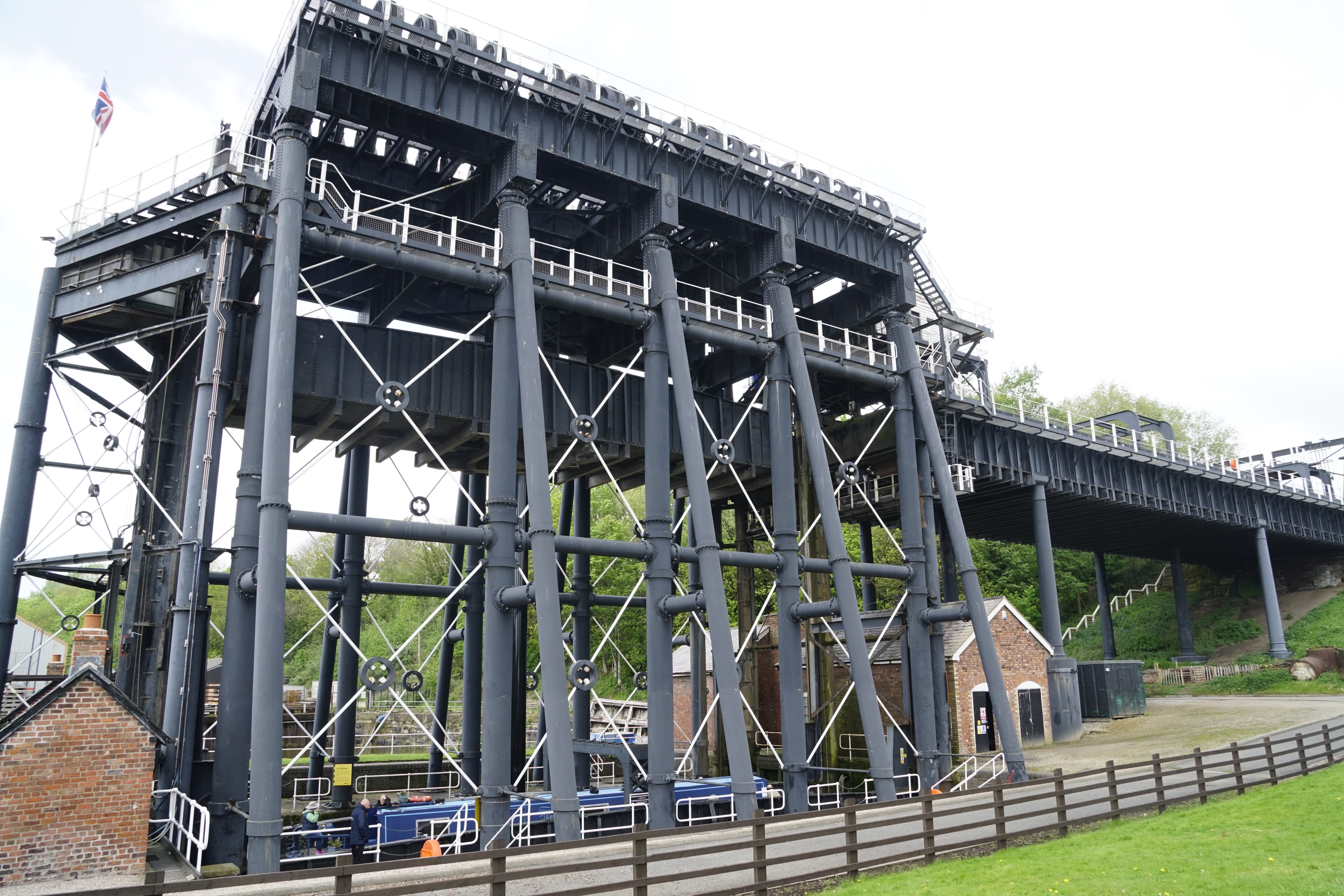 The weather broke for us today, providing a cool and (thankfully!) calm cruising experience. The misery of yesterday’s joust with the remnants of Hurricane Hannah has become a memory, but one that will be spoken of by us years into the future. However, that is not the “big thing” of today. It was our visit to the Anderton Boat Lift, one of the “Seven Wonders of the British Canals”.

In 1875 an engineering problem was presented at the confluence of two prominent British commercial waterways. The Weaver Navigation came within a matter of a few hundred feet of a bend in the Trent & Mersey Canal. Were that all it would have been a simple matter to cut a channel to connect the two systems. However, the Trent & Mersey was perched on a bluff precisely 50 feet 5 inches higher than the Weaver Navigation. Too close and too high for a series of locks to bridge the distance.

Edwin Clark, a renowned hydraulic engineer, was employed to design a solution. He created a massive structural framework that looks like something out of an H. G. Wells science fiction novel. It towers above the Weaver and contains two 75 foot long,15 foot wide troughs that each contain 5 feet of water.

These “caissons” are each large enough to accommodate 2 narrowboats, and when full of water each weigh over 500,000 pounds! They were each mounted on a single massive hydraulic piston that was 3 feet in diameter and 50 feet in length. These pistons were recessed into buried cylinders that fully extended one piston as the other simultaneously retracted under the riverbed. The caissons thus became a colossal set of balance scales carrying narrowboats up and down between the two waterways like a pair of monumental elevators.

Because the caissons acted as counterweights all that was required was a 10 horsepower steam engine to operate the lift. Unfortunately, salt water corroded the iron pistons into uselessness by the early 1900’s. An electrically powered system of gears, pulleys, and counterweights was then devised to replace the pistons and operated into the 1980’s at which time the Anderton Lift was abandoned due to structural fatigue and maintenance costs.

In 1997 a grassroots public outcry halted plans to scrap the lift. Over £7 million Pounds was raised to restore the system, this time to its original hydraulic configuration. However stainless steel pistons were now employed with a working life expectancy of nearly 100 years. The refurbished lift was re-opened to boat traffic in 2002 and thus made possible our visit to this 19th Century wonder today.

PS. Visits to “The Big Things” are certainly the hallmark events of travel. However, it has occurred to me that “the little things” are often overlooked and deserving of a separate post… to be continued.