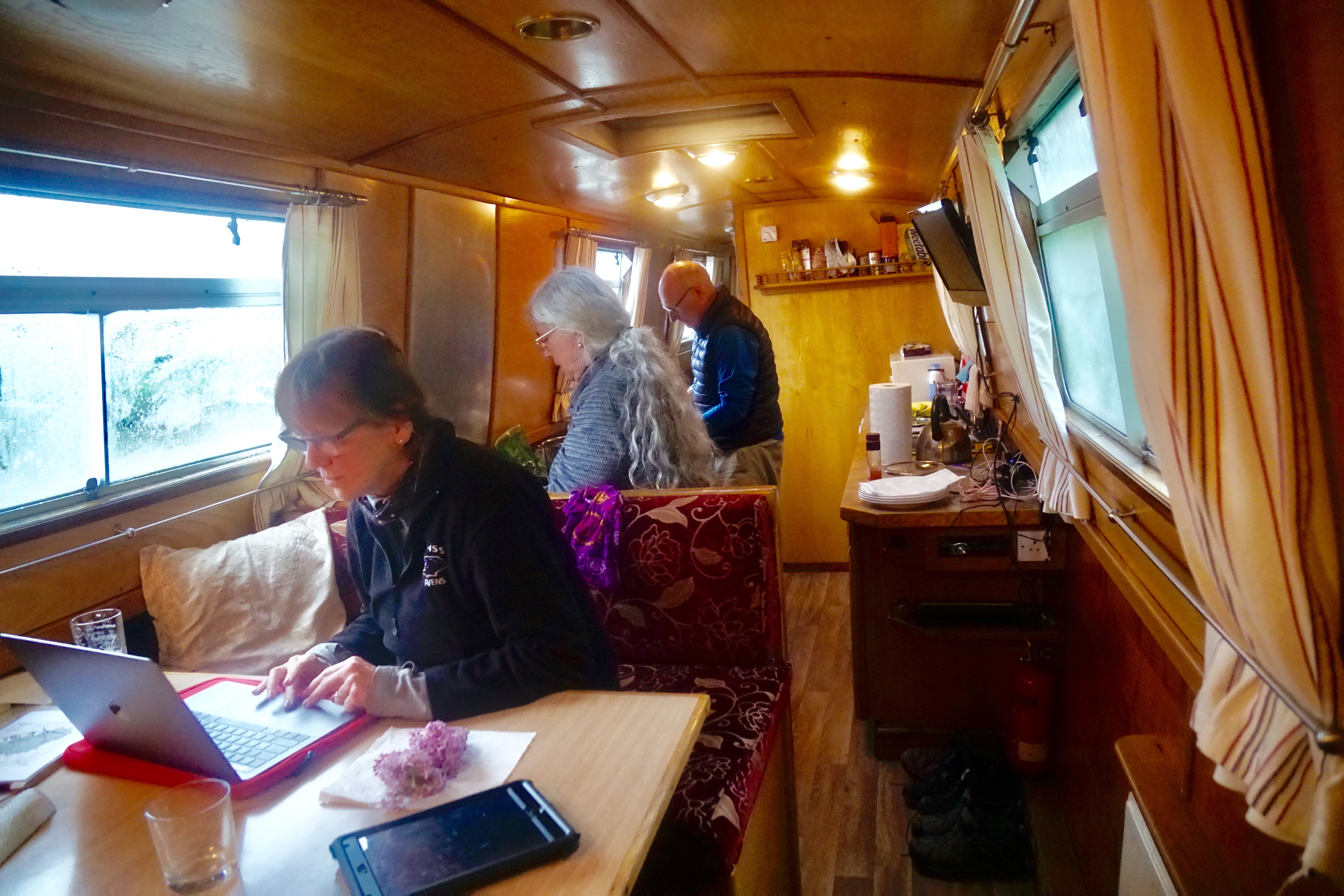 Christine became a fan of Strongbow Hard Cider during one of our prior travels to the UK. This post is not about that beverage.

In case you missed my last post, we awoke at 2 a.m. this morning to the raucous laughter of some young drunks. They pounded against our hull with their fists and thus called the four of us from sound sleep. I peered out the window to discover that they had untied us from our moorings and set us adrift. We restored order soon enough, but the adrenaline charge assured that there was to be no more sound sleep at that docking.

We slept-in this morning to stave off sleep deprivation. By the time we had dressed and taken a bite of breakfast the predicted storm “Hannah” was hard upon us. Concern even motivated our Welsh friends, Huw and Nina Thomas, to give us a ring. The rain sodden zephyr had crossed their location to the south and was of sufficient intensity to even threaten long established trees. The weather reports were properly pessimistic as I watched the barometer dip into some serious storm territory. Nevertheless, we proceeded down the canal with intentions of a 4 hour cruise to the Anderton Lift, one of the “Seven Wonders of the British Canals”. There will be more on that destination when we make it… a hint that we did not make it today.

We pressed on against the force of the storm for over two hours. Driving rain and brutal headwinds slowed our progress to the point that full throttle threatened to become insufficient in some stretches. On a “normal day” we should have seen dozens of fellow narrowboaters plying the waters. We saw only one while underway. Prudence dictated that I find a secure mooring, and when good fortune presented an opportunity I seized upon it.

We are tied to concrete embedded mooring rings in an isolated picnic grove that is only accessible by boat. There should be no miscreants tonight unless they drop in by parachute. The weather should clear by morning as this “StrongBlow” plows through. In the meantime we are four souls stuck by circumstances in a submarine-like interior space that is barely 6 feet wide and 50 feet long. We half expect a cigarette smoking Rod Serling, wearing a pencil-thin tie, to suddenly appear on shore speaking to an invisible audience… “Given for your consideration, 4 friends set out for a pleasant narrowboat holiday only to find that their destination has become… The Twilight Zone.

PS. This evening, in spite of the cramped quarters, Christine and Tom prepared a marvelous onboard dinner for the four of us. Nanci and I handled the KP (clean-up) duties afterward. The sharing that we celebrated became the highpoint of the day… thus we have now found ourselves in The “Highlight Zone”!