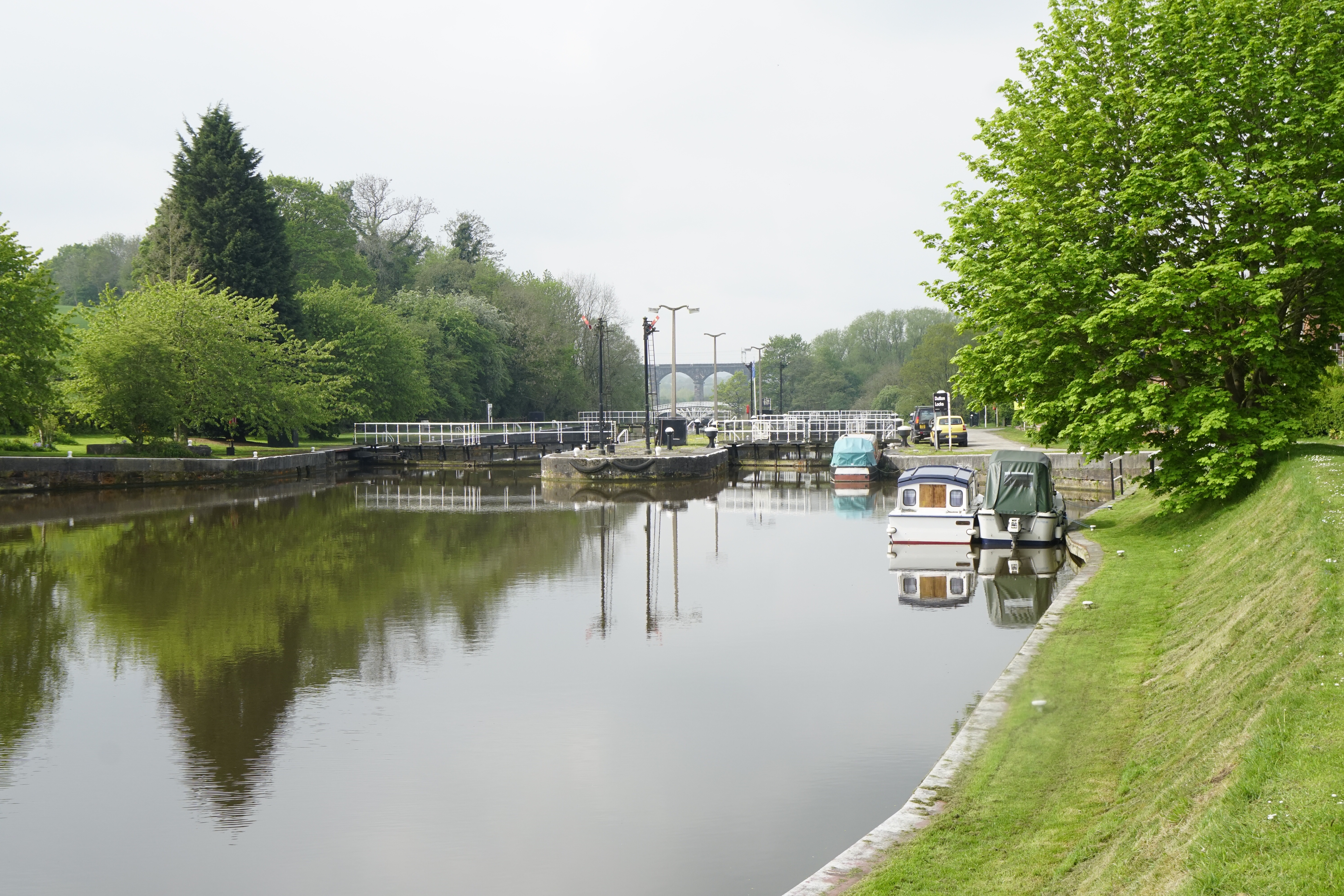 Our Canal Companion Guides have been invaluable. Each page dissects a 4-5 mile (about 2 hours travel by narrowboat) section of the canal offering a detailed map and an informative narrative. One such section on today’s travel upon the 200 year old Trent & Mersey Canal enticed us into pausing for two very rewarding hikes.

Yesterday’s post provided photographs of the enchanting Longacre Wood that is cared for by the Woodland Trust. If you have not yet seen those pictures they are worth the “visit” to that post and give some insight into the beauty that surrounds us on these ancient canals.

The second hike mentioned in the Guide is to the Dutton Locks on the Weaver River Navigation. Less than half a mile walk down a public right-of-way that travels along farm fields we intersected this inland waterway.

Into the late 20th Century one could see large coastal vessels navigating these waters. From the Trent & Mersey Canal the upper decks of large ships would seem to magically appear and ghost across the land and woods in the distance, the Weaver waterway being hidden from the eye. Sadly, the perfectly good Weaver has been abandoned by commercial trade and is slowly falling into disrepair for want of the funding required to maintain it. The sunken hotel boat Chica may well be a predictive metaphor for the future of the waterway and locks.

It is almost comical to see the two huge Dutton Locks (one of which has been out of service for 30 years) serving small pleasure craft. The lock-keeper told us that upstream is a narrowboat club and on holidays the club will send as many as 60 vessels into the lock where they assemble in an orderly fashion and pack together like so many LEGO blocks for a single downriver discharge. At the end of the day, presumably after a few pints, the boats return and present an impossible confusion of narrowboats colliding into one another in slow motion. For some reason their skippers are unable to replicate the morning’s feats of seamanship.

The locks were first opened in 1874, technological wonders of the 19th Century. 14 water turbines powered the valves and gates, controlled by large iron levers and windlass handles. Today the task is powered by electric motors and is controlled by the lock-keeper at a switch laden panel. He candidly states his preference for the reliability of the old system.

Another nod to the remarkable ingenuity of the 19th Century looms in the distance. In 1837 Joseph Locke designed and built the imposing Dutton Rail Viaduct. Composed of 22 sandstone arches, it has carried rail traffic across the the river valley for 180 years, from steam railroading’s infancy to the bullet-trains of today. It remains one of Englands busiest rail corridors bearing up to the scores of trains that cross is every day.

In contrast to the bustle of the distant viaduct was a peaceful green and well placed bench that provided us with the perfect opportunity for a self-timer group photo.

PS. I am typing this post in the very early morning hours of May 2nd. This is our last travel day on Great Britain’s canals as we will be returning to our Middlewich port this afternoon. Salten-Fjord has been our home and our transportation for 3 weeks. The inevitable question presents itself, will we do this again. I have to reserve judgment but promise more on that another time. We still have 3 weeks left ahead to us to this journey.