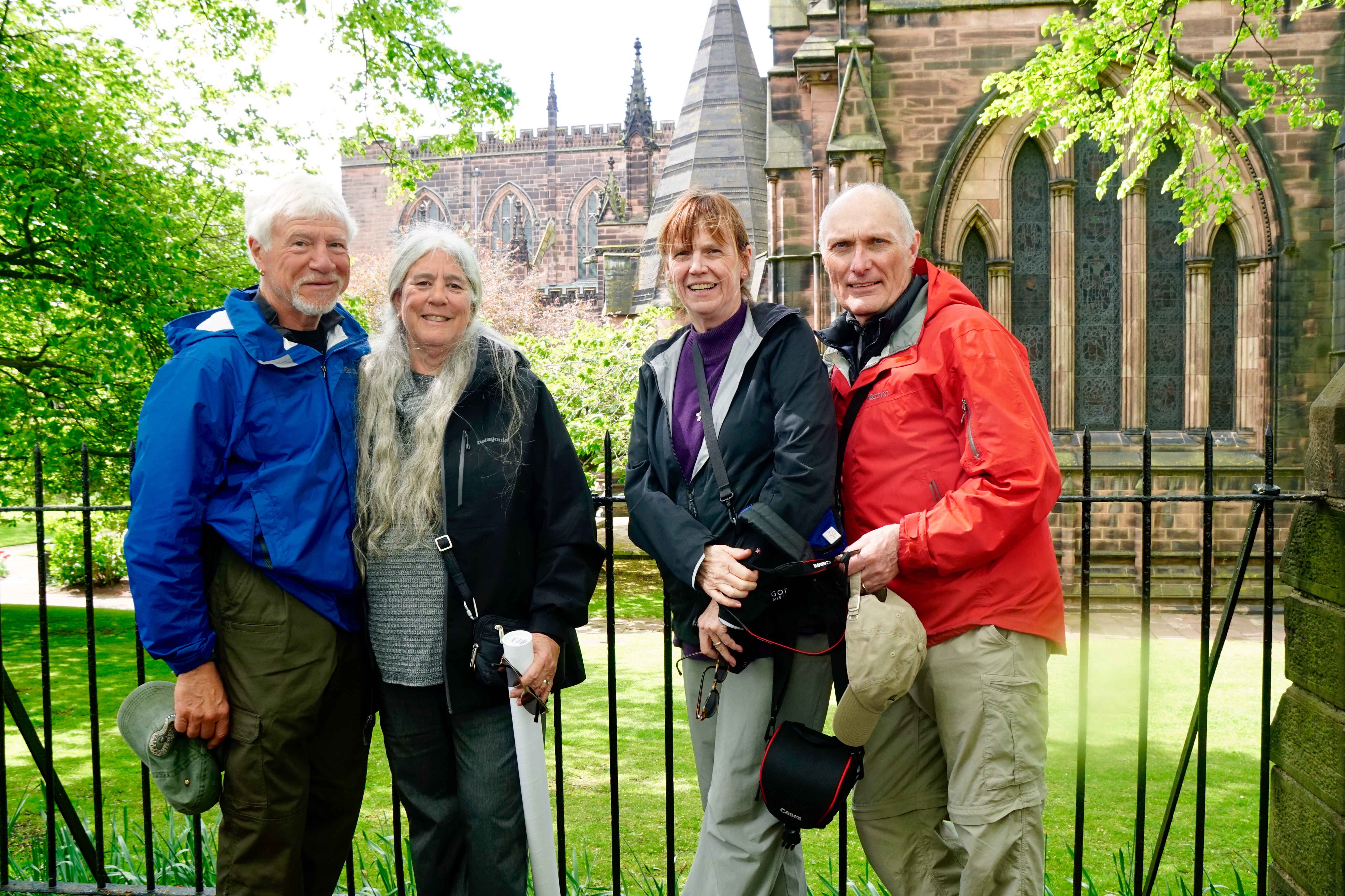 May 2nd was our 21st and final night aboard Salten-Fjord. I confess to some sadness in the parting, having fulfilled a 45 year ambition.

We left the vessel “clean and tidy” as required by our charter contract, took time for a final picture, and then were greeted by Andy of AK Private Hire who transported us and our luggage 30 miles to our accommodations in the City of Chester. This will be our home for the next 3 days.

We have always preferred the non-typical in our choice of travel lodging, and the selection of 3-Kings Studios is no exception. This converted 500 year old home was once the Tithehouse of the Earl of Shrewsbury. Persons were required to stop and pay a toll here to enter the city. It is no accident that we are located next to one of the city’s fortification gates. Our rooms are accessed by climbing 34 steep and narrow stairs, no elevators here. The floors, walls, and ceilings are uneven, but the effect is marvelous!

Chester is littered with old buildings.

No other city in the entire United Kingdom has as many listed historical structures. Next door to us is the iconic Bear and Billet, a pub that dates to the 1500’s.

Chester was established in the First Century AD, when it was founded as a Roman garrison at the farthest western extent of the Roman Empire. The region was valued by Rome for salt production. The garrison town quickly expanded into a center of commerce that provided all the comforts of Rome.

Baths were constructed in the classic fashion with centrally heated Caldarium, Tepidarium, and Frigidariums. (Hot, Medium, and Cold rooms)

The town’s ancient Roman history was largely lost by the Middle Ages, but 20th Century urban improvements uncovered a trove of artifacts and the foundations of many ancient structures.

The Roman theme has inspired adults and children alike. One can not go far here without encountering a “Centurian” and his cohort of “little Legionnaires” enjoying a school outing as they learn the finer points of shield defense and sword play.

The end of a hard day drilling the troops may even bring the fatigued Centurion into a neighborhood pub for a pint or two.

Chester is a town still surrounded by it’s fortress walls. Over two miles around, one can still walk atop these fortifications that envelop the old city.

The wall was built upon the earlier Roman fortifications. In the 1600’s this was the site of some of the most intense fighting in England’s Civil War. A monument to the dead is maintained as the location of a major breech in the wall and a clever display allows one to “see” the carnage unfold.

King Charles Tower, located on the wall, is the place where on September 24, 1646, King Charles I saw his troops defeated at the Battle of Rowton Moor.

Within the fortress confines are two remarkable churches. St. John’s was built by the armies of William the Conqueror shortly after his successful invasion in 1066.

Chester Cathedral, also 1,000 years old, was built on the site of an ancient Roman temple. More than just a church, it has beautiful gardens, presents daily demonstrations of falconry, and is a venue for art… including a very unusual display of classic Triumph automobiles next to the worship space.

We enjoyed Evensong sung by the Cathedral’s exceptional youth choir. I look forward to returning for some reflective time to satisfy the yearning pilgrim within me.