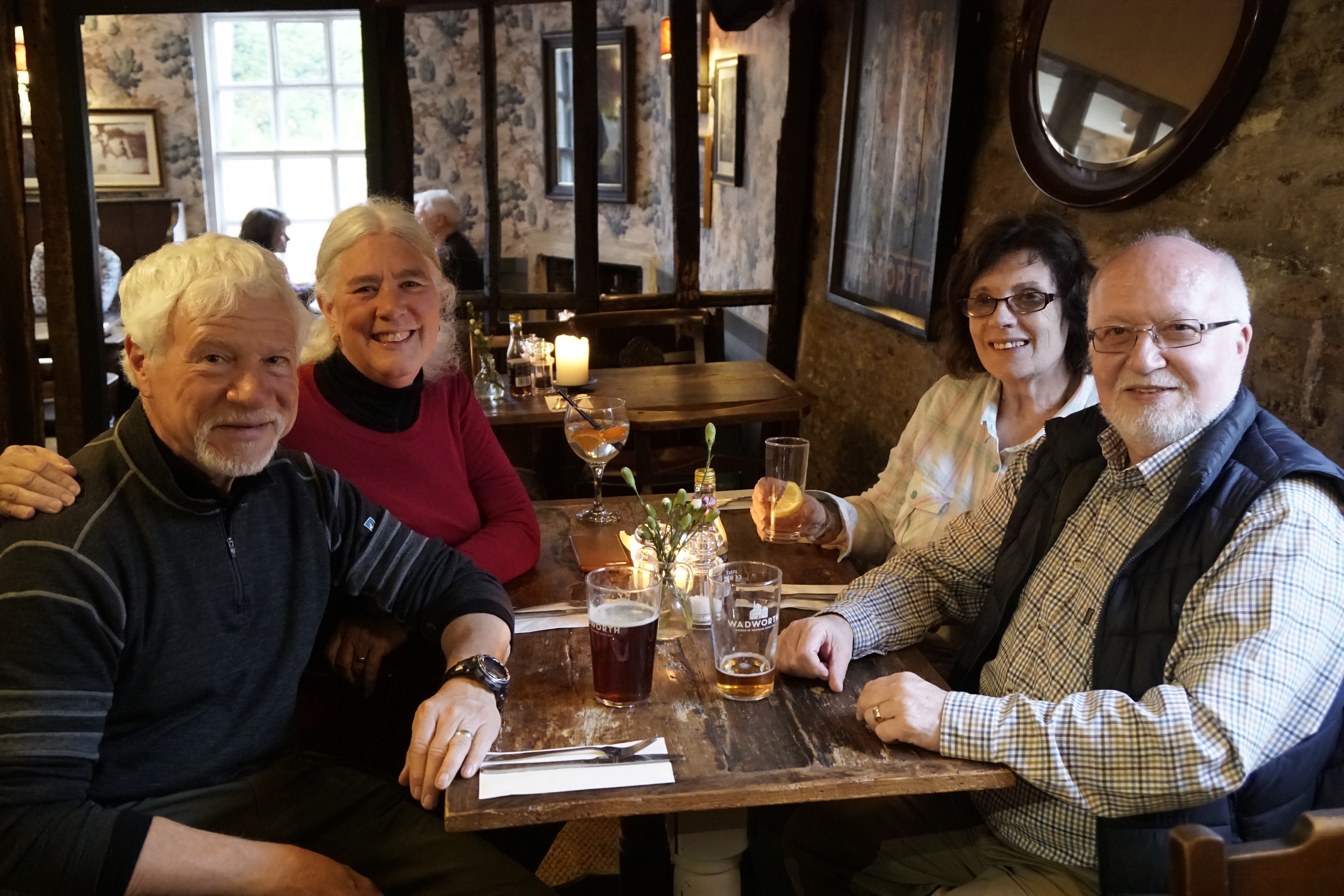 We were met at the Cardiff Wales central train station by our Welch friends, Huw and Nina Thomas. This friendship dates back nearly 20 years and includes travels together both in the States and abroad.

Huw has laid out a plan for our 3 days together and as soon as we had loaded our bags into the “boot” of his car we were off to Bristol and the S.S. Great Britain!!

Designed by the noted engineer I. K. Brunel (represented here by an actor) the ship was launched in Bristol England in 1845.

When launched she was the largest vessel ever built and the most technically advanced. At 322 feet long she was the first ship to combine the elements of an iron hull, advanced reciprocal steam engine, and propeller drive. She was a hybrid in the sense that she was equally capable as either a tall masted sailing ship, or a steam propelled vessel, and she could sail using both features simultaneously. When not under steam power her sailing efficiency was enhanced by a remarkable (even by today’s standards) feature that allowed the crew to disengage the huge prop and in a matter of minutes raise it into a recess within the hull, all by remote control.

The ship has a storied history that included over 1 million miles of sailing throughout the world. She could carry up to 700 passengers in accommodations that ranged from barely tolerable steerage to opulent first class.

The S.S. Great Britain last sailed commercially in 1884 and was abandoned in the Falkland Islands where she became a floating warehouse. She was scuttled and sunk in 1937.

In 1970 UK philanthropist Jack Hayward resolved to recover the Great Britain. He spearheaded her recovery, return, and restoration. She is now a remarkable museum ship that is located within her original construction dry dock in Bristol Harbor.

Actors dressed in authentic Victorian era attire stroll the area lending realism to the experience. Included was a detachment of British soldiers from the Crimean War who put on a demonstration of rifle fire and close order drill.

My highlight of the day was the opportunity to climb 100 feet into the ship’s rigging and out to the end of the yard spar. Christine and our companions documented the effort with still photos and video. Below are links to the video clips.

Out on the Yard Spar: https://youtu.be/EGTJttAl5q4

Our day continued with a drive through amazing countryside and villages and included a pint in a ancient tavern in the town of Castle Combe.

Combe’s environs, including the tavern and church, have been the location for many television and movie shows, including scenes in the Harry Potter movies.

We spent the night in the village of Lacock, which is a living museum owned and preserved by Great Britain’s National Trust. The homes and businesses are leased under condition that the authenticity of the village is maintained.

We dined at the George Inn. The fireplace still sports the original meat rotisserie that was powered by a small dog running in a wheel!

Our chambers for the night were wonderfully appointed at the Red Lion Inn which had also been the setting for many period movies and television programs. We continue on in the morning.