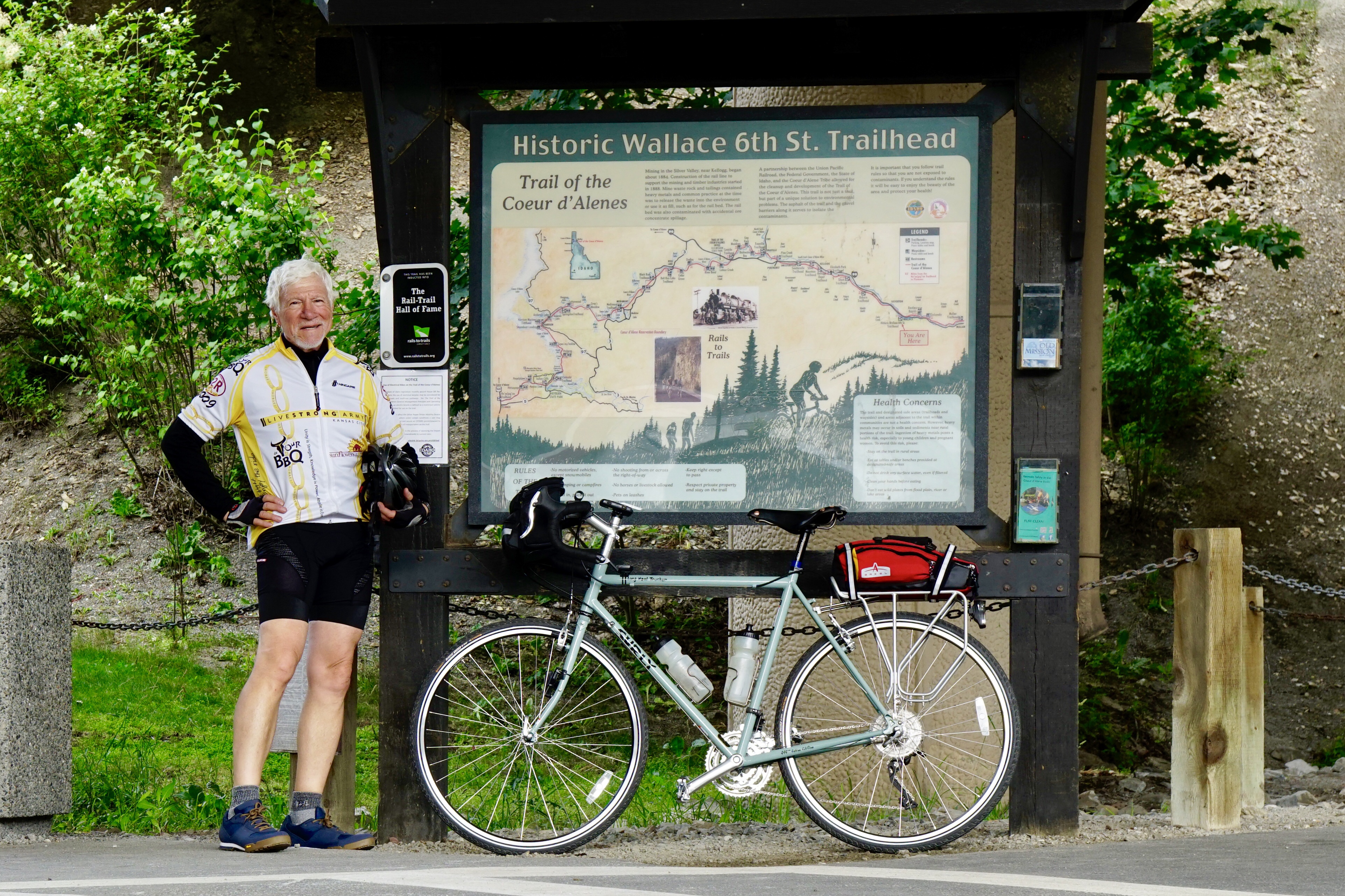 I arrived in Wallace Idaho noon on the 16th. It’s a quirky town of about 1,000 souls that holds itself out as a major tourist destination, and the only town in the US that is listed in its entirety on the National Register of Historic Places.

One intersection in town declares itself to be the “Center of the Universe”. Who am I to say otherwise… I’m writing this missive within its confines.

“Quirky” may also describe the Wallace RV Park where I am situated for the next 4 nights.

It is not a typical camp selection for me. It sotmewhat resembles a parking lot, but there is some grass and a creek bubbling behind my trailer.

It’s just that there are no picnic tables, no fire grates, and few children. There is an abundance of retirees, large motor homes (we call those “sun-blockers”), pets, ATV’s, and cigarettes smokers. It’s just a different camping group than I am accustom to. This sounds like a complaint so let me clarify: There is a terrific brew-pub located at one end of the park, the Trail of the Coeur d’Alene (“CdA)” is located about 200 feet outside the park, and the heart of downtown (and the Center of the Universe) is just a 2 block walk. I really like this place! What’s more, I have full hook-ups (electric, water and sewer) for only $35 a night. Wallace RV Park is popular and rightly so.

On my first night here I walked 2 minutes to the City LImits Brew Pub here in the park and enjoyed a “flight” of beer samples.

All were top-notch craft beers. The burger I ordered was excellent as well. Outside on the patio I had the pleasure of hanging out with fellow campers Kathy (a solo camper from Michigan) and Donna and Terry, a couple from MIchigan also staying in the park. The three had met for the first time here and rode the Route of the Hiawatha the same day (the 15th) that I did. Terry and Donna rode the CdA early on the 16th and paid an unfortunately high price for the shuttle back to Wallace.

My plan had been to ride from Wallace to the west end and transport back. I had been told that the cost was one dollar per mile. What I had not been told was that the miles include the drive to deliver me to my destination AND the shuttles drive back to Plummer… over $150!! I was taken aback, but I still intended to go forward the plan on the morning of the 17th.

Kathy piped up that she was heading to the west end of the CdA where she had a camp reservation at Heyburn State Park. She offered to take me and my bike with her and I could then bicycle the 60+ miles back to Wallace. What a stroke of luck for me to find a Good Samaritan! It was agreed that we would hit the road in the morning.

The morning arrived cold, a bit dreary, and with a mild threat of showers. True to her promise, Kathy made room for me and my bike. We set off on the nearly 2 hour drive to Heyburn which included a stop at Walmart and a fuel up. We said our goodbyes at Heyburn State Park and I was spinning down the CdA by 11:30 a.m..

The CdA is a 73 mile long 10 foot wide ribbon of well maintained asphalt that was created in the 1990’s by a partnership between State, Federal, and Tribal governments and the Union Pacific Railroad. It is a recreational trail reserved solely for use by bicyclists, inline skaters, and pedestrians.

The CdA is one of the true jewels of America’s Rail to Trails movements. It was not created out of an abiding love for recreational cyclists. Rather, it was created out of the expediency of remediating an environmental catastrophe.

Between the Idaho towns of Mullen on the east and Plummer on the west is a 73 mile stretch of highly toxic earth. Beginning in the late 19th Century the Union Pacific Railroad had been transporting mining ores along this stretch of track. The ores were lead, zinc, and silver. The ore cars leaked a soup of acids, heavy metals, and poisons that permeated the earth along the rail line. The Union Pacific wished to abandon this section and the price was partnering in its cleanup. Options included the monumental task of removing the effected rock and soil or encapsulating it on-site by covering it with a barrier to protect the public. A layer of untainted gravel, covered with asphalt was the answer that created the Coeur d’Alene Trail. One is reminded that it is an imperfect solution as cautions abound to remain on the trail, don’t drink from surface water sources, clean clothes and equipment of any dust from the trail…

The CdA Trail nearly spans the Idaho panhandle from Washington to Montana. The west end lies within the Coeur d’Alene Indian Reservation. From Heyburn State Park the Trail crosses the 3,100 foot long Chatcolet Bridge and Trestle.

As the CdA extends east it follows the Coeur d’Alene River past marshes and many small lakes.

In the east it begins to gain elevation as it wanders with the railbed through an area once populated with mines and small mining communities.

There are 20 trailhead access points and 17 waysides with picnic tables, benches, and some with toilet facilities.

Today I bicycles from Heyburn State Park to Wallace. 60 miles, otherwise known as a “metric-century” (61 miles = 100 kilometers). It was a nearly perfect day for the ride. 71 degrees, and overcast. There were spits of drizzle now and then and a breeze piped up that was as often a head wind as it was a tail wind. For 4.5 hours I rode that ribbon of asphalt and enjoyed the eye-candy of lush wetlands, waves of grasses, wildlife, and the surrounding mountains.

I crossed a number of trestles, Not the high trestles of The Hiawatha, but sturdy low bridges that dated to the start of the 20th Century.

With the exception of the beginning and end this was a flat ride. There was no coasting, but then there was little hard peddling too.

There was a brief stretch through a couple of towns that passed industry, a trailer park, and that Walmart,

Otherwise, this was a ride of remarkable beauty.

Unlike the Hiawatha, I did not stop to read the information signs as I felt pressed by the threat of rain and the need to finish by late afternoon. There were picnic tables and pit toilets at appropriate intervals and even bicycle repair stations that provided tools and a tire pump.

I enjoyed a midpoint rest for lunch at one such trailside spot. The sandwich and trail mix I packed provided a needed energy reboot.

The trail deserves a relaxed rather than a frenetic approach in order to allow one to savor the sights that unfold along the way. I witnessed an Osprey swoop and pluck a fish from the lake adjoining the trail. The bird was faster than the fish… and my camera. I also missed by minutes a moose in the waters by the trail. I encountered the occasional beaver lodge, a menagerie of birds, an abundance of waterfowl, and the usual assortment of small mammals.

Again, I found myself very pleased with the versatility of my new bike. I intend to do more riding on the CdA while here in Wallace. I only hope that I can find adequate cell/WiFi coverage to upload this post and the images of the day. If you are reading this I succeeded.