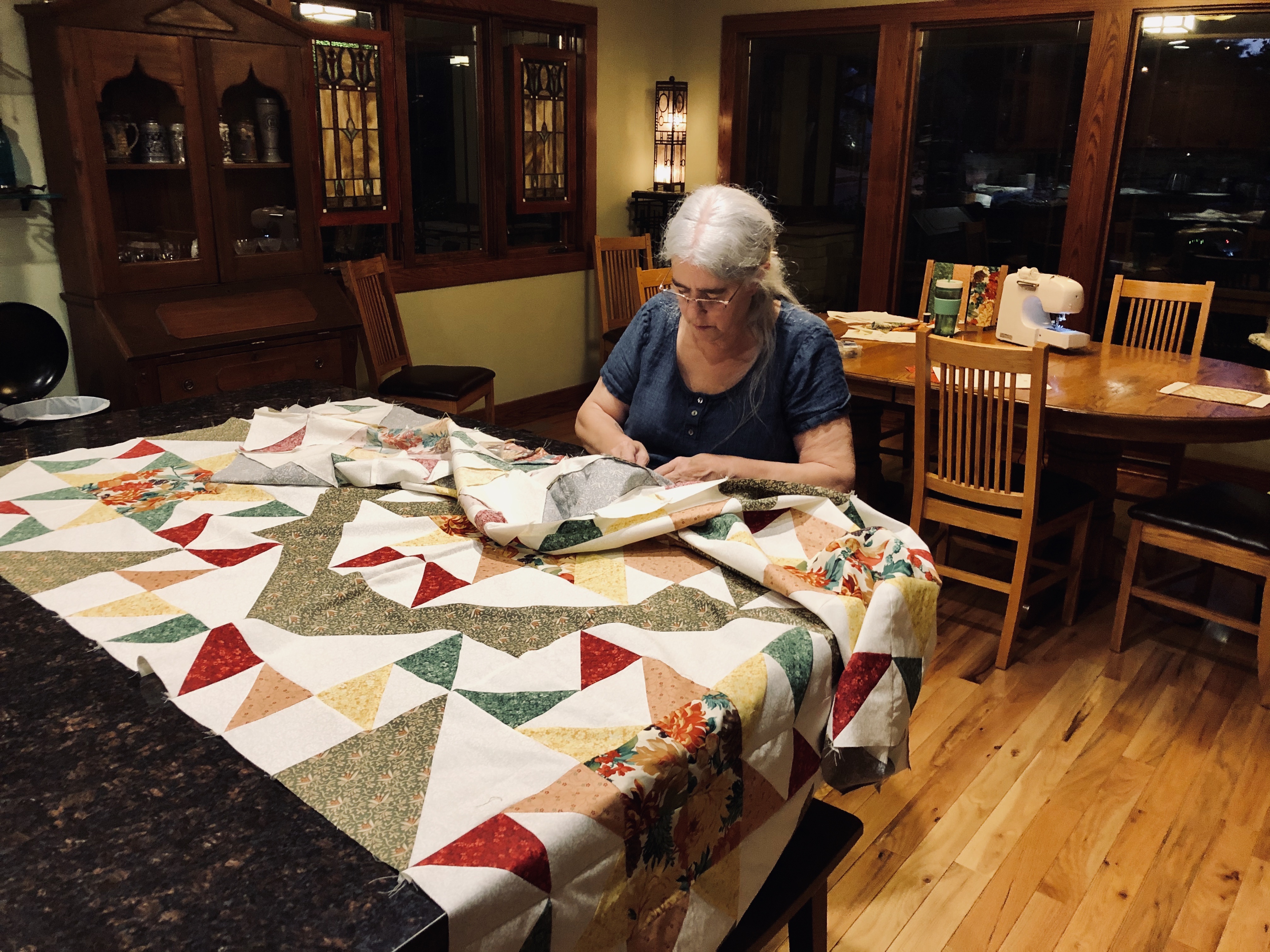 Winter is malevolent in its reluctance to release its grip on the plains of North Dakota. So it was in March of 1922 when Peter first opened his eyes to that harsh world. Born to Michael and Marianna (a derivative of Mary), immigrant Germans from Russia, he was the youngest of their 6 surviving children.

A quilt, perhaps “The Quilt”, was the first barrier that swaddled and separated him from his mother’s warmth. Stitched from the rags and tatters of worn dresses, shirts, dungarees… it was an artifact of necessity and love, recycling before the term had been coined. Austerity and poverty were the drivers by which cow chips were “harvested” to heat their homes; cellars stored root vegetables, home canned goods, blood sausage, hams, and crocks of fermenting kraut to see a family through the isolation of life stealing blizzards; and a worker at the local dairy smoked his cigars to the point of burning his lips only to then knock off the ash and chew the remaining stub. He would then dry the mash of used tobacco, grind it between his fingers and roll the dust into a cigarette. “Waste not” was a way of life, a mantra that took many forms. Renewal was born of necessity and not ecology. Quilts breathed new life into old cloth and were an expression of a woman’s art and her love.

As a young student in the one-room schoolhouse Peter learned to speak English. He was also inspired to become a teacher. His father believed any education beyond the 8th grade merely took a man needlessly from the toils that were important for survival.

Thus, a divide formed between father and son. Marianna encouraged Peter and shared his dream that he might find a better life beyond the prairie. Peter’s passion for education was equaled only by his passion for running. Near daily his flaming red hair could be seen streaking across the horizon.

Often he would compete with an equally fleet-of-foot young Sioux native from the nearby Fort Totten/Spirit Lake Reservation. Some days “Red” would win, and on other days it was the onyx haired youth who would prevail. Their friendly rivalry was fired by genetics that spanned millennia and continents. Local events featured them, and as they grew older they met in State competitions. Each would find their remarkable speed to be the key to higher education.

Peter graduated from high school as Salutatorian in a class of two. He was awarded an athletic scholarship to Bemidji State University where he captained the track and football teams. Years later he would be inducted into the University’s Athletic Hall of Fame. There was little that Marianna could give him as he left home for college; Some money that she had secreted from her husband over the years (and upon discovery it earned her a beating at his hands), and The Quilt.

The Quilt remained among Peter’s possessions throughout college, the Second World War, graduate school, and his marriage to Pauline. In 1952 they brought their first child, another Peter, home. The Quilt was there.

The younger Peter was thoughtful and sensitive in a way that the older one did not understand. “You think/worry/feel too much…” was an often spoken refrain from father to son. In the son’s late adolescence the elder occasionally introduced the younger as, “a friend of the family”, or as the Prodigal Son. It was not a withholding of love, just an acknowledgement of frustration and the divide.

Young Peter left for college not in pursuit of any passion for higher education, but as an escape from the conflict with the elder. Pauline had little to offer that would mend the divide, but in 1970 she sent her oldest son off to college with The Quilt.

The Quilt was older than either Pauline or her husband. It had weathered at least 50 winters and showed in its fibers the strain of the years. Marianna had died in 1952, a few months after young Peter’s birth. It fell to Pauline’s mother, Labibe (her name is an Arabic derivative of Mary), who was an immigrant from Lebanon, to deploy her skills to mend the failing Quilt. She stitched what she could, but ultimately chose to encase it in flannel. The Quilt served young Peter throughout college and accompanied him in 1974 on the road to his new home in Kansas City, Missouri.

The Quilt was there for his marriage to Christine, the birth of yet another Peter, and the births of daughters Renee and Alexis. At one time or another it embraced each member of the family. Marianna’s hand hovered lovingly, and silently, over the family.

By the time that the elder Peter and Pauline came to celebrate 40 years of marriage The Quilt had become little more than a large rag. Labibe’s felt casing had itself become threadbare and riddled with holes. Shreds and pieces of The Quilt could be found wherever it had lain. Christine removed the covering and found one salvageable section that measured about 4 square feet. She hand stitched what she could to restore the piece and make it suitable as a framed artifact, a gift to Peter and Pauline on their wedding anniversary.

Peter passed from this life in 2009. The framed remnant of The Quilt still adorns a wall in Pauline’s home. It displays Christine’s handwritten attribution to Marianna Volk Schloss, its creator.

Recently she finished work on a quilt that now graces our bed. It is a stunning piece that caused me to marvel and then ask, “How many stitches does it take to make a quilt?” “Two hundred thousand… maybe more” she replied.

Authors and poets such as Miguel de Cervantes Saavedra and Barbara DeAngelis have written that love is invisible… that it cannot be seen or measured. I imagine that they were never given a quilt.

PS. The earliest Peter Schloss that I have knowledge of was born in 1793 in Jockgrim, Germany. His grandson, my great-grandfather, was Peter Schloss. He was born near Odessa, Russia/Ukraine in 1857. He and his family are pictured below.