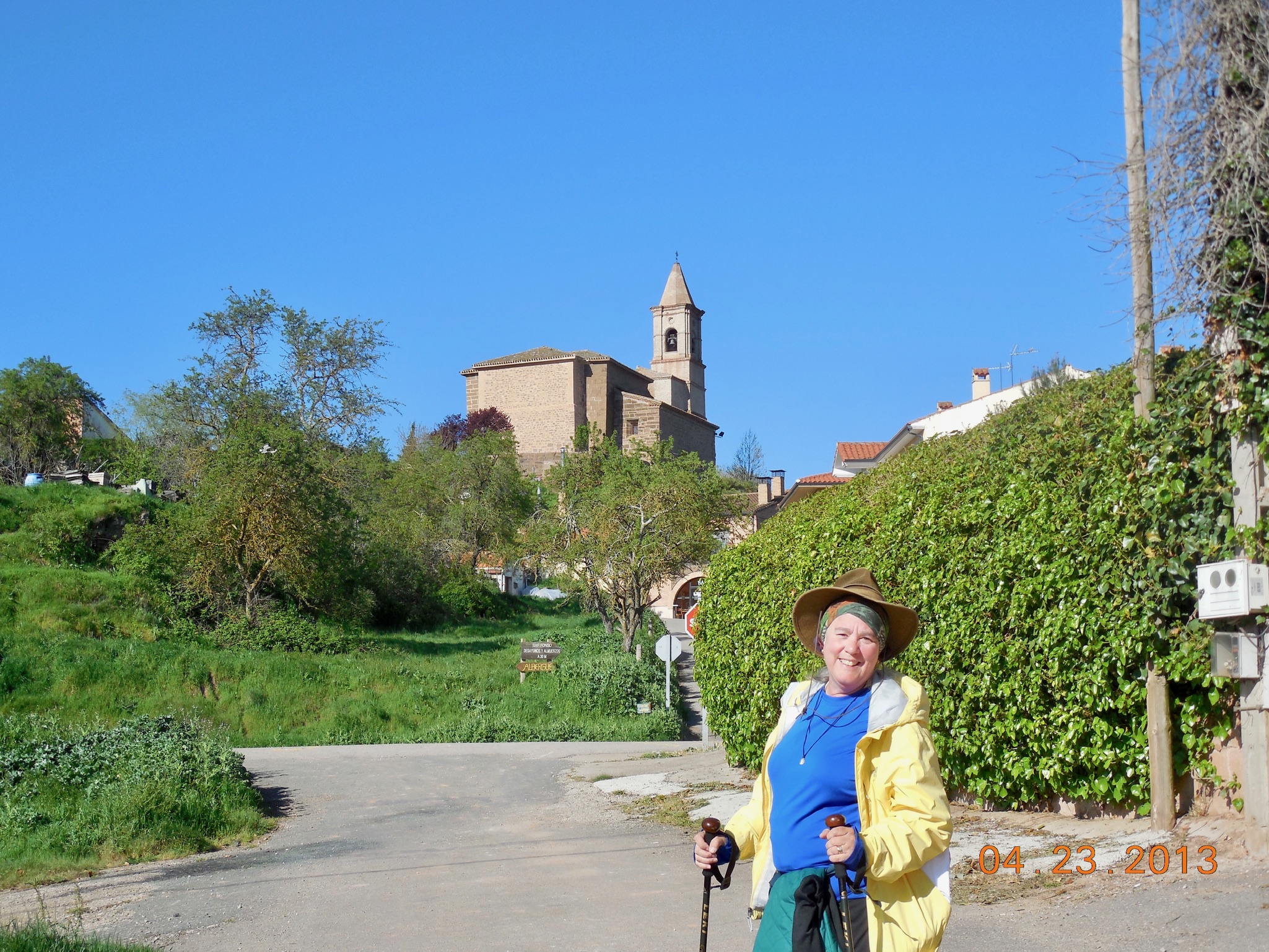 Exiting Navarrete in the morning we approached and passed by the Municipal Cemetery.

As noted in a prior post, the ornate arched entry to the cemetery was appropriated from the 12th Century ruins of the Monastery of San Juan de Acre.

Atop the arch and just beneath the crucifix is a carved depiction of the legendary battle between Charlemagne’s heroic knight Roldan and the Saracen giant, Farragut. The 10th Century battle between the two warriors was reputed to have spanned nearly 4 days without rest. Finally, Roldan slew the giant with a powerful throw of a well-aimed rock. (Shades of the biblical story of David vs. Goliath)

The battle is commemorated along the Camino through statues, relief carvings, and inscriptions, most dating to around the 12th Century. The killing of Farragut allegedly liberated the region from his tyranny and freed a host of Charlemagne’s imprisoned knights.

High on a hilltop we encountered a restored “beehive” watchtower. Legend says that this is the place where the epic battle occurred and is still known as Poyo de Roldan (Roldan’s Hill).

Passing by the tiny village of Ventosa (pop. 150) we encountered one of the countless images of Santiago (St. James). This one was noteworthy as being “cute”.

Most often Santiago is either represented as a wandering pilgrim dressed in medieval attire with his staff, water gourd, and scallop shell…

…or more ominously as the legendary “Matamoros” (Slayer of the Moors). In recent years these historic statues have generated much controversy for their anti-Muslim theme. (Shades of the current controversy over Confederate monuments in the United States)

At Najera (pop. 7,000) we reached our 16km day’s destination. Prominent in the town is the fortress-like church de Santa Maria la Real.

The impression is no accident. For over 300 years Najera was the bastion and capital of the ancient kingdom of Navarre. The church holds the earthly remains of kings and queens from the 10th through 13th Centuries.

Legend has it that in 1044 Don Garcia, son of King Sancho the Great, was hunting with his favorite falcon. The falcon flew into a cave but did not return. Garcia, entering the cave to retrieve his falcon, miraculously came upon a hidden statue of the Virgin Mary. Honoring the miracle of the “Virgen de la Cueva” (Virgin of the Cave) he and King Sancho initiated the construction of the church in 1052.

Najera provided me with my first samplings of two cephalopod delicacies that I would seek whenever possible: “Pulpo” (Octopus), and Squid prepared in its own ink.

Either of these set before me on the table were an incentive for Christine to move to another table. In the years that have followed I learned of the remarkable intelligence of octopi and their related species. They are one of the few life forms on our planet that display complex problem solving abilities, tool utilization, communication skills, learning by observation, and  are perhaps even self-aware. All of this is even more remarkable given that they have a lifespan of only 2 years. Dining on these invertebrate wonders now produces a feeling of guilt in me.

April 24th was another spectacular day on the Camino.

Clear skies and a feeling of community with those who also walked.

Our spirits were elevated for the 21km ahead and further boosted by a waymark that “announced” Santiago de Compostella to be 582km ahead. We had completed 240km since leaving St. Jean Pied de Port in southern France.

I will display a few more pictures of the day at the end of this post but continuing the theme of “legends” takes me to the end of the day and the town of Santo Domingo de la Calzada (Saint Dominic of the Road). Saint Dominic was born Domingo Garcia in 1019. Legend says that his application to become a Benedictine cleric was twice rejected because he was illiterate. For a time he lived as a hermit in the nearby forests. A bishop from Rome learned of Dominic and became interested in his devout dedication to the Faith. He ordained Dominic to the priesthood in 1039 whereupon Dominic is credited with undertaking the construction of a significant pilgrim bridge, a hospital for Peregrinos, the Cathedral, and otherwise elevating the town from obscurity into a major waypoint on the Camino. He died in 1109 at the age of 90 and is buried in a beautiful vault within the Cathedral. He is deemed Spain’s patron saint of Civil Engineers.

Near the plaza of the Cathedral of Santo Domingo is the large Albergue, Casa del Santo, which contains 210 beds for those walking the Camino. It also features a large chicken coop where roosters and hens are kept and cared for. The reason for the coop and fowl:

Legend has it that in the 1300’s an 18 year old German Pilgrim and his parents walked the Camino. The Pilgrim, named Hugonell, rejected the sexual advances of a Spanish girl who was staying at the same inn as the young man. Jilted, the girl hid a silver cup among Hugonell’s personal effects and then alerted the local authorities that he was a thief. Hugonell was tried and sentenced to hang. After his execution his parents mourned his fate, the body still hanging from the gallows. Hugonell then spoke to them from the gallows and said that his life had been spared through the miraculous intervention of Saint Dominic. The parents rushed to seek aid from the local Magistrate to release their son. The Magistrate who was eating dinner laughed saying, “Your son is as alive as this rooster and chicken that I was feasting on before you interrupted me.” In that moment the two roasted birds jumped up from the plate and begin to happily sing and crow! Hugonell was immediately released from the gallows and pardoned.

For 700 years in tribute to the legend an ornate chicken coop is still kept at the rear of the Cathedral, occupied by a live chicken and rooster. The white plumed birds, which are furnished by the nearby Albergue, spend 30 days in the coop before being replaced by another pair.

I am left to wonder at the fate of the birds after their 30 days in the Cathedral’s pen. Perhaps they go from the “Friar’s Pen into the Frier”. (My bad! Just a pun that I couldn’t resist sharing.)

PS. More images from the day:

A virtually abandoned golf village of empty apartments. The golf course and condominiums having fallen victim to an economic downturn.

…and apparently this has been a problem.