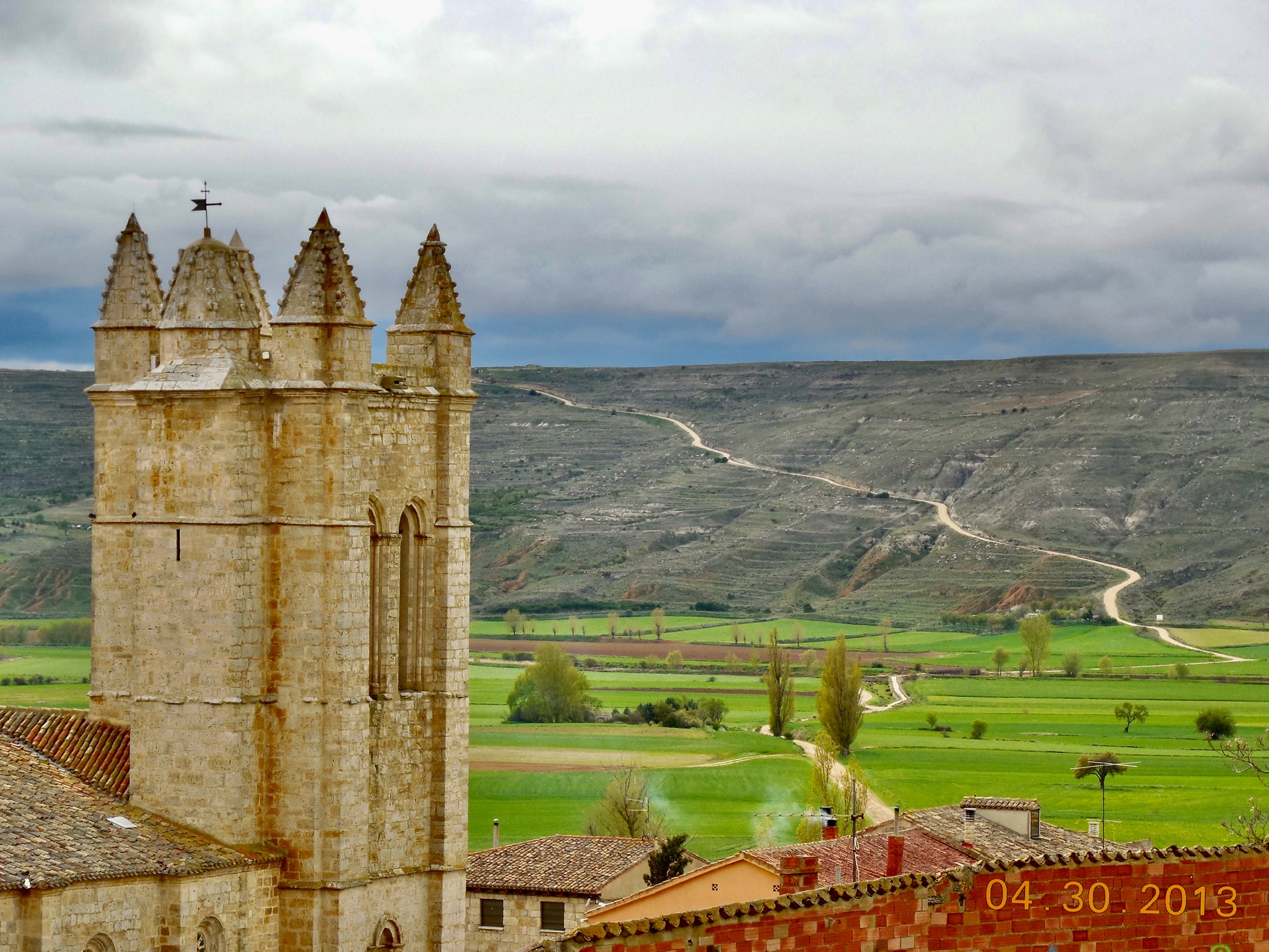 It is commonly said that the Camino unfolds to the Peregrino in three ways; physically, emotionally, and spiritually. Our first steps toward Santiago were taken 16 days and nearly 300km ago. My ankle, blisters, and Christine’s illness stood as proof that we had experienced more than our fair share of “the physical”.

If there was a point that began my “emotional Camino” it was April 29th when I left Christine behind in Burgos. There had previously been days that we did not walk together, but she was always there with me by the afternoon and through the night. We would share dinner and perhaps an evening prayer service. We were seen by others as a couple. We processed the day aloud to each other and built upon each other’s perceptions and experiences. There were the silent connections, a touch of the hand, an embrace, a kiss. On April 29th I left all of that behind acceding to her choice, her decision.

My feet plied the path out of Burgos, but my thoughts and emotions remained firmly anchored at the hotel. I was leaving her only because of her insistence. Or was I?

Guilt and self-doubt haunted me. An emotional debate played out within me, a battle in which I could not prevail. This is what she wanted. But you didn’t have to give in to her. She will be fine, and rest is what she needs. It would have been better if you had stayed to be at her side. She doesn’t want “your Camino” to end because of her. “Your Camino doesn’t matter, she does. She wants you to continue. You are selfishly continuing because it is what you want! And so the emotional struggle played out through the day. I took fewer pictures, I spoke with fewer pilgrims, I walked alone.

I did not completely close myself to the experience. Shortly after leaving urban Burgos I saw a large building complex to my right across the river. Checking my Brierley guide I confirmed that it was a place where men live solitary lives, isolated from society. A monastery? No, a prison.

There was little between Burgos and Hornillos.

Spain is the second most mountainous country in Europe. Much of what is not mountainous is a high plateau that extends through at least 5 of its autonomous regions. The Meseta ranges from 1,300 to 3,200 feet in elevation, much of it dedicated to farmland. It reminds one of central/western Kansas, especially in summer when the heat and sun are relentless and there is little shade to be found in the expanses of grassland. Many pilgrims disparage the Meseta, holding that it is a part of the Camino to be skipped, if possible.

Instead of summer heat the day was a damp bone chilling cold. Overcast skies did nothing to elevate my mood. The Camino unwound before me like a ribbon from a spool.

21km from Burgos I arrived at Hornillos del Camino, a village with fewer than 100 inhabitants. I checked in at the town’s only Albergue which featured accommodations for 32 in bunkbeds divided between two dormitory style rooms. One pilgrim who sported a Hitler-like mustache turned out to be a priest from Germany. He sought out keys to open the village church, 16th Century Iglesia San Roman, and invited us to join him for Mass which he celebrated in German.

The inside of the church was a veritable freezer, so much so that the priest said Mass with his baseball cap on.

All of us wore our coats, some their rain gear, and one woman came wrapped in a blanket that she borrowed from her bed at the Albergue. I was soon to learn that her life and ours would become interwoven for years to come.

After Mass the pilgrims, priest included, adjourned to a pleasant and thankfully warm restaurant/bar, Casa Manolo.

I had come to know virtually all of the pilgrims in the bar over the past weeks. When I walked in I was greeted like a hero returned from war. “Hey, It’s Pete!!” However, “Where’s Christine?” were words that followed and reignited my angst. My explanation of her absence brought a chorus of “Don’t worry, she will be fine!” and words of similar encouragement. Someone bought me a beer and good cheer followed.

A Case of Mistaken Identity.

At some point the woman who had been wrapped in a blanket in church sought me out and asked somewhat sarcastically, “Are you THE Pete?” “Well, I’m A Pete.” “Do you belong to THE Christine?” (long pause…) “Yes, I suppose. I am married to A Christine.” To which she responded, “Then you ARE THE Pete, and I have had to explain more times than I care to mention that I am NOT Christine, and NOT married to you!

I was dumbstruck. It turned out that this woman who I had never before met, Margaretha Finefrock, lived a few miles from us in Kansas City. She was also a mediator. We had scores friends and acquaintances in common. I was later to learn that at approximately the same time back at her hotel in Burgos, Christine was doing her best to convince a pilgrim that they had NOT met at the airport in Madrid. “I’m sorry, but I’ve never been to Madrid, I flew in at Barcelona.” Undaunted, the woman replied, but you are from Kansas City, aren’t you?” “Yes, but…” “Then you and I talked at the airport in Madrid!”

Christine and Maggie, as she prefers to be called, were women of the same approximate age, same approximate build, who both sported long silver-white hair. The three of us were victims of mistaken identity and a remarkable set of coincidences. Again, as a gentleman once told me in Puerto Rico, “Pete, in life there are no coincidences.”

Here is a picture taken a few days later after Christine and Maggie met. It is easy to see how someone who did not know them well might mistake one for the other.

The “coincidences” didn’t stop there. It turned out that Maggie occupied the bunk above me. She was also struggling with a very bad cough that kept her up most of the night. The next morning she repeatedly apologized to me and others in our room for fear that she had interfered with our sleep.

Maggie has a sense of humor as dry as the Meseta in summer. A couple of days later in Fromista she met Christine in person. As I was making introductions Maggie broke in with, “I slept with your husband at the Albergue in Hornillos!” I about swallowed my tongue. Women must have some sixth sense that allows then to victimize us poor men because they both began to loudly laugh at my discomfort. To this day Maggie and her husband Doug remain two of our dear friends in Kansas City.

Cold, wet, muddy, and miserable. These words describe the 20km hike to Castrojeriz (pop. 1,000). Along the way I made the acquaintance of Jacobien Ubbink (carrying the red covered pack), a pilgrim from the Netherlands. Christine and I would be welcomed as guests into her home near Amsterdam in 2018 as we traveled the Continent that year. Her friendship was another “gift” from the Camino.

By the time that I arrived in Castrojeriz I was suffering coughing  spells. I was shivering, the kind of chill that hints more at a fever than at cold weather. My joints ached and a dull headache had firmly lodged behind my eyes. I was miserable.

The morning of May 1st I started out on foot for Fromista. I did not get very far.

I had learned by email the prior evening that Christine had arrived in Fromista by bus and checked into a room at a local Casa Rural (small rural hotel). There were no photographs or Camino for me that day. That night I wrote the following reflection:

I started out this morning for Fromista. The night had been pretty sleepless as coughing and chest congestion were getting the best of me. At the city limits, I came to the conclusion that continuing on 25km in the cold and fog just might be the dumbest thing that I had done in a while. I returned to the albergue and with the help of the manager called for a taxi. A cab ride, followed by a trip to the Urgent Care Clinic with Christine netted us 3 prescriptions each, and instructions to take 2-3 days off from the Camino. Who am I to argue with the Doc when I feel so crappy.

PS. I arrived mid-morning in Fromista. Christine was already there. She took one look at me and decided that I needed to see a doctor more than she did. We sought out the local clinic. The doctor was pleasant and spoke passable English. We described our symptoms, but when we mentioned chest pain he turned to his nurse and gave her instructions in Spanish. We were each in turn then attached by conductive leads to an EKG machine just to make sure one or both of us weren’t threatening a heart attack.

The doctor explained his diagnosis. I had severe bronchitis that could easily become pneumonia. He was certain that Christine’s condition was pneumonia. An x-ray could confirm it but there was no x-ray machine at his clinic. He urged us to take a few days rest from the Camino. If we did not improve we were to seek medical care in one of the larger cities that lay ahead. Whatever the source of our infections, it had struck many pilgrims, some harder than others. One Camino friend, Kalina from Germany, landed in the hospital for 4 days before she could continue.

The examinations, including the EKGs, and 6 prescriptions, which were filled at the town pharmacy (a steroid, antibiotic, and analgesic for each of us), cost us a total of 90€. Had we waited until the afternoon the examinations would have been free. The doctor and clinic provided care to the Peregrinos without charge between the hours of 1 and 4 p.m.. We knew that going in but chose not to wait to see the “Camino Angels” that staffed the clinic.