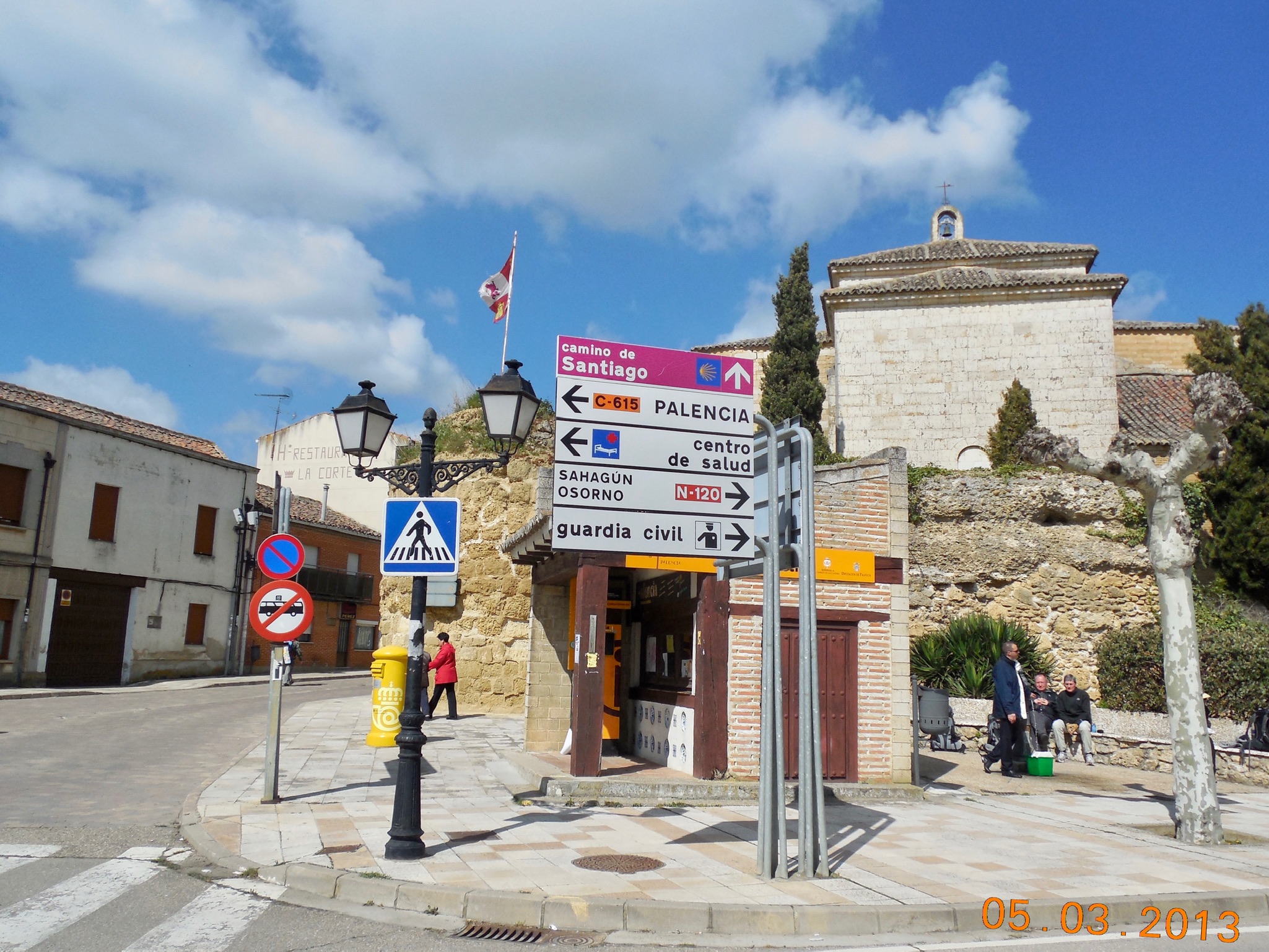 We had built in some extra time at the end of the Camino before our return flight departed for the States from Barcelona. However, staying “off the Camino” for 4 or more days because of illness would stress our calendar. Another consideration was fear of abandoning the friendships that we had formed with those pilgrims walking roughly the same timeline.

Our accommodations at Hotel San Martin in Fromista were clean and comfortable but Christine had already spent 2 nights there. The town of 800 had little to offer that we had not already experienced.

Had we been walking, our next overnight would have been Carrion de los Condes, only 20km distant. Fromista was a stop on the main cross region bus service. We found that a number of Peregrinos were catching the bus for Leon, intent on skipping 120km of the barren Meseta that lay ahead.

Our meds, especially the prednisone, had given us a boost but the doctor had cautioned us not to be deceived into thinking we were beyond risk for complications. We took his words to heart as our German Camino friend, Kalina, was in hospital being treated for pneumonia.

It was decided that we would bus to Carrion de los Condes (pop. 2,100) and spend the night of the 2nd there in a hotel. On May 3rd we would again take the bus but skip over a “stage” and instead ride 40km to Sahagun (pop. 2,500). We would remain there in a hotel the nights of the 3rd and 4th.

It was my hope that three nights would put me safely back on the trail. I did not have the same optimism for Christine. Prudence dictated a longer convalescence for her. It was decided that on the morning of the 5th I would set out on foot (14km) for the remote village of Calzadilla de los Hermanillos (pop. 200) and Christine would take the bus 57km to Leon (pop. 180,000) which, like Burgos, is a major destination city that features one of Spain’s great cathedrals. We anticipated that I would arrive in Leon on the 6th, remain there with Christine until the morning of the 8th, and then determine how we would proceed.

Sadly, the main tourist site in Fromista, the 11th Century Iglesia (“Church”) de San Martin de Tours was closed at the times we could have visited. This church was consecrated the same year as the Norman conquest of England (1066) and declared a National Monument in 1894. It is a remarkably well preserved Romanesque structure that looks more like a fortress than a place of worship. The interior features over 300 sculptures integrated into the construction. These images, obtained from Wikipedia present what we missed.

The bus did not arrive until late morning and deposited us in Carrion de los Condes shortly before noon.

Within minutes of our arrival we had secured our night’s lodging at the comfortable Hostal la Corte.

We found that along the Camino the term “hostal” was applied to a wide range of establishments that were more like humble one star hotels and “casas rurales”. Typically en-suite but lacking such amenities as a television, telephone, or mini-bar, they were clean, serviceable, and inexpensive. At approximately 35€ per night double occupancy,  a continental breakfast was often included.

Early that afternoon our Camino friends began arriving and adjourned with us to a pleasant café/bar.

A beer or two later and we were joined by Maggie (Kansas City, USA) and Bernard De Geeter (France).

It was at this time that doppelgangers Maggie and Christine first met and Maggie announced for all to hear that she had “slept with me” in Hornillos del Camino. The room erupted with laughter. It seemed that everyone was in on the joke, except me.

That evening I joined our Camino friends for a moving prayer service in the 12th Century Iglesia de Santa Maria del Camino.

I and the other Peregrinos were individually blessed by the priest.

One of the Sisters of Santa Clara who operated the adjoining 52 bed Albergue stood beside the priest and gifted each of us with a small paper star that the Sisters had individually cut out and colored. This humble present remains as one of my treasured mementos from the Camino.

By the way, Capistrano may have its swallows, but Carrion has Storks.

We again found ourselves assembling with an array of Peregrinos at the bus stop for a late morning departure. Once more it seemed that many were bound for Leon, now about 100km distant. We would get off in 40km at Sahagun.

Bus travel in Spain is inexpensive, comfortable, and usually on-time. The buses are clean, climate controlled, and well maintained. A plus are the expansive windows which provide a view of the passing countryside.

Of course this paled in comparison to the experience we were missing had we walked. “God Grant Me the Serenity to accept the things I cannot Change…” (from the “Serenity Prayer”)

Finding lodging without reservations proved to be no problem in mid-Spring. The Brierley Guide not only provided listings for Albergues along the Camino but also a selection of alternative accommodations. We checked into the two star Hostal Alfonso VI for two nights.

We were again rewarded with simple, inexpensive, but pleasant and comfortable en-suite accommodations.

We took some time to explore the area and determine what might be worthy of a more detailed visit the following day. We posed beside the parody Pilgrim Statue in front of the Albergue Cluny,

and also before the Arch of San Benito adjoining

There were the ruins of the Chapel of San Mancio,

the Torre del Reloj (Tower of the Monastery of San Benito),

and the 12th Century Iglesia San Lorenzo, one of the earliest area churches to be built of brick and mortar.

We also visited the train station where in two days Christine would board a train bound for Leon.

That evening we ran into our dear friends Kris (Denver, USA) and Jenny (New Zealand) who joined us for dinner.

We may have been “off the Camino” as directed by the doctor, but we were embracing the second part of the “Serenity Prayer”, “… The Courage to Change the things that we can…”