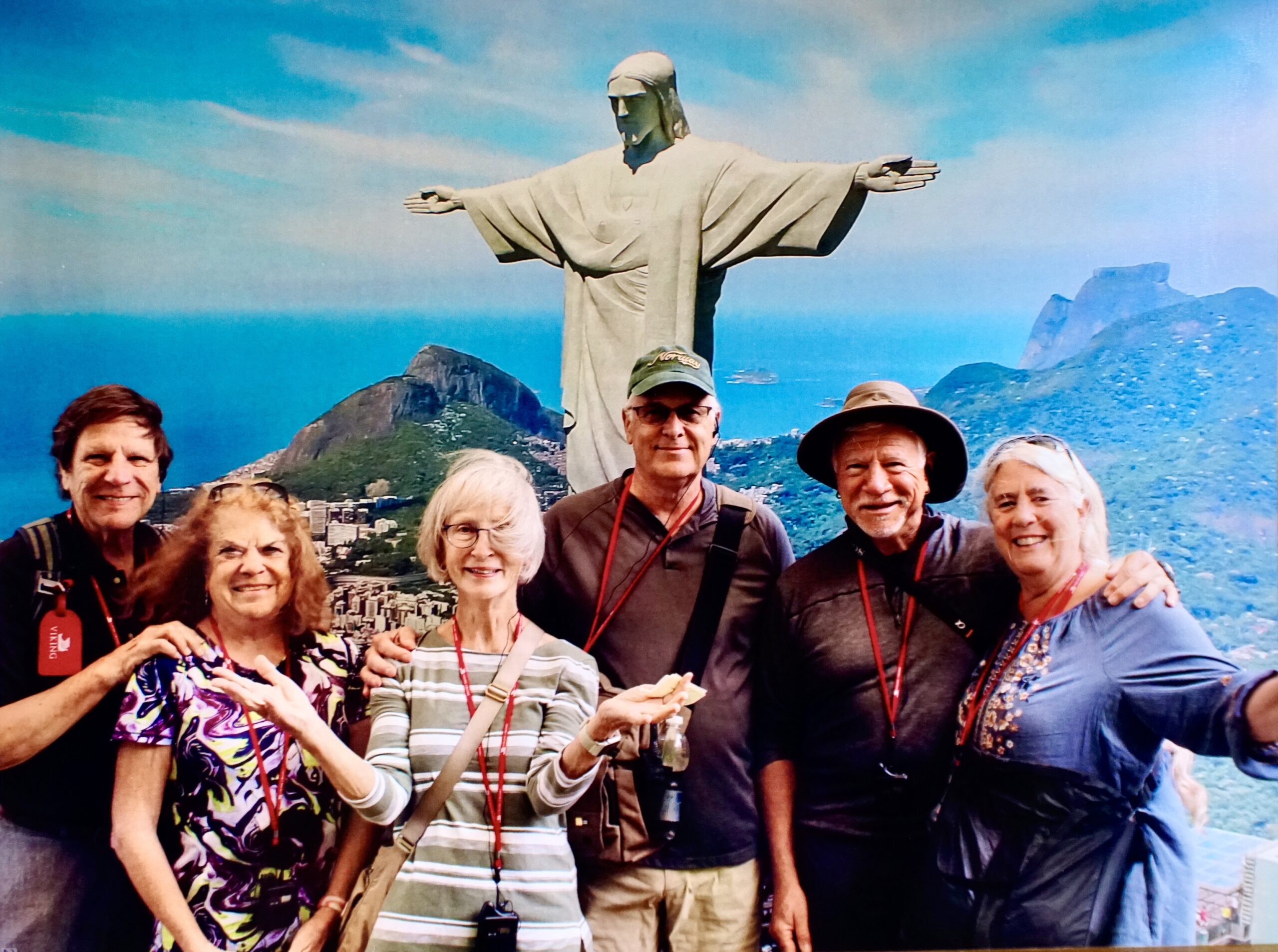 Hi Everyone. Yes, we are home having landed in KC the morning of December 3rd. From takeoff in Buenos Aires, Argentina to landing in KC took 26 hours including a layover in Atlanta. All in all not an unpleasant experience. Jetlag was minimal with only 3 time zones crossed. The shock was in departing a summer climate and landing in the precursor of winter. It took me 2 days to get through the mail, pay bills, and return to being a responsible adult.

After those couple of days I focused upon dealing with a variety of computer issues that consumed much of a week. Among the problems was the failure of my travel blog to send out email links to subscribers. This annoying issue has plagued me on and off for months. I had decided not to write the final posts, this one and Buenos Aires, until resolved. It is my hope that the corrections have now been made in the proper servers. My fingers are crossed. Now back to Rio.

Our second day in Rio de Janeiro (November 27th) came courtesy of a passenger’s health emergency. The original itinerary allocated one day to Rio, and one to Montevideo, Uruguay. The detour to secure emergency assistance necessitated the cancelation of our stop in Montevideo but left time for an overnight in Rio. Since we have previously been there, it was good with us.

My previous post detailed our informal “out-and-about” exploration on November 26th.  November 27th was a formal sightseeing day. Christine and I were signed on to a 7 hour tour that would include two of the most iconic sights in Rio: the towering 125 foot tall Christ the Redeemer statue which overlooks the city from atop 2,310 foot Corcovado Mountain,

and Sugerloaf Mountain, a 1,300 foot monolithic granite peak that stands sentinel over Rio’s harbor and is ascended by a series of cable cars.

The day opened under a threat of rain, but the bigger concern was that our eight-hour tour would have to be squeezed into less than six hours. Viking Jupiter was scheduled to depart port at 1 PM and our tour to begin at 7 AM. It was presumed that something would have to give. We were reasonably certain that the ship would not depart and strand scores of passengers. We were equally certain that the tour itinerary would suffer in some respect. At least the rain held off.

Our tour guide was delightful and entertaining.

“Herding  the cats (passengers)“ and driving to the top of Corcovado Mountain took well over an hour. It also required a series of bus transfers to accommodate the inability of the larger buses to navigate the increasingly narrow and winding roadway up the mountain.

Completed in 1931, and with arms spanning 92 feet, Christ the Redeemer stood stark white against a clear blue sky, a breathtaking marvel to behold. Unfortunately, the cloud cover so evident from below, now acted as a barrier to our view of the city from atop the mountain.

The viewing platform at the foot of the statue was packed shoulder to shoulder with visitors. A lucky few with deep pockets enjoyed sightseeing from the seat of a helicopter.

The trip down from the mountain and the continuing journey to the cable cars that would take us to the top of Sugarloaf added nearly another two hours to the “adventure“. Again, something would have to give.

We could make out some features of the city through occasional breaks in the clouds. This included the huge Maracana soccer stadium, reputed to still hold the world record for spectators at a soccer event, 210,000 in the 1950 World Cup tournament.

We spent nearly an hour at the top of the mountain. Christine and I were joined by friends from the ship, Paul, Shirley, Ann, and Bob. Their state rooms were located immediately down the hall from ours. We had become fast friends, sharing many events, activities, and dinners. Here we posed for one of those tourist pictures taken at the admission stand.

Proceeding on to and up Sugarloaf we encountered lines of tourists at each of the two cable car stages.

At the top of Sugarloaf we were rewarded with magnificent views of the city and the harbor below. Unfortunately, Christ the Redeemer was now out of sight.

Next on our itinerary was an “authentic Brazilian dining experience”. We arrived at a shoreside restaurant which seated over one hundred people being served an endless parade of meat and accompaniment dishes. What should have been a relaxed one hour-plus experience turned into eat, grab, and go.

It sounds worse than it really was. For us the important things were to the statue and Sugarloaf, not the dinner. In any case, we arrived back at the boat shortly after 2 PM. Viking Jupiter’s departure was delayed by over an hour, and we were not stranded.

Christine and I left Rio de Janeiro with the conviction that we would return someday to spend a leisurely week enjoying the beaches, sights, and cuisine. Rio is unquestionably a world-class city. November 28th was to be our final at sea day. On November 29th we would arrive in another world class city, Buenos Aires.