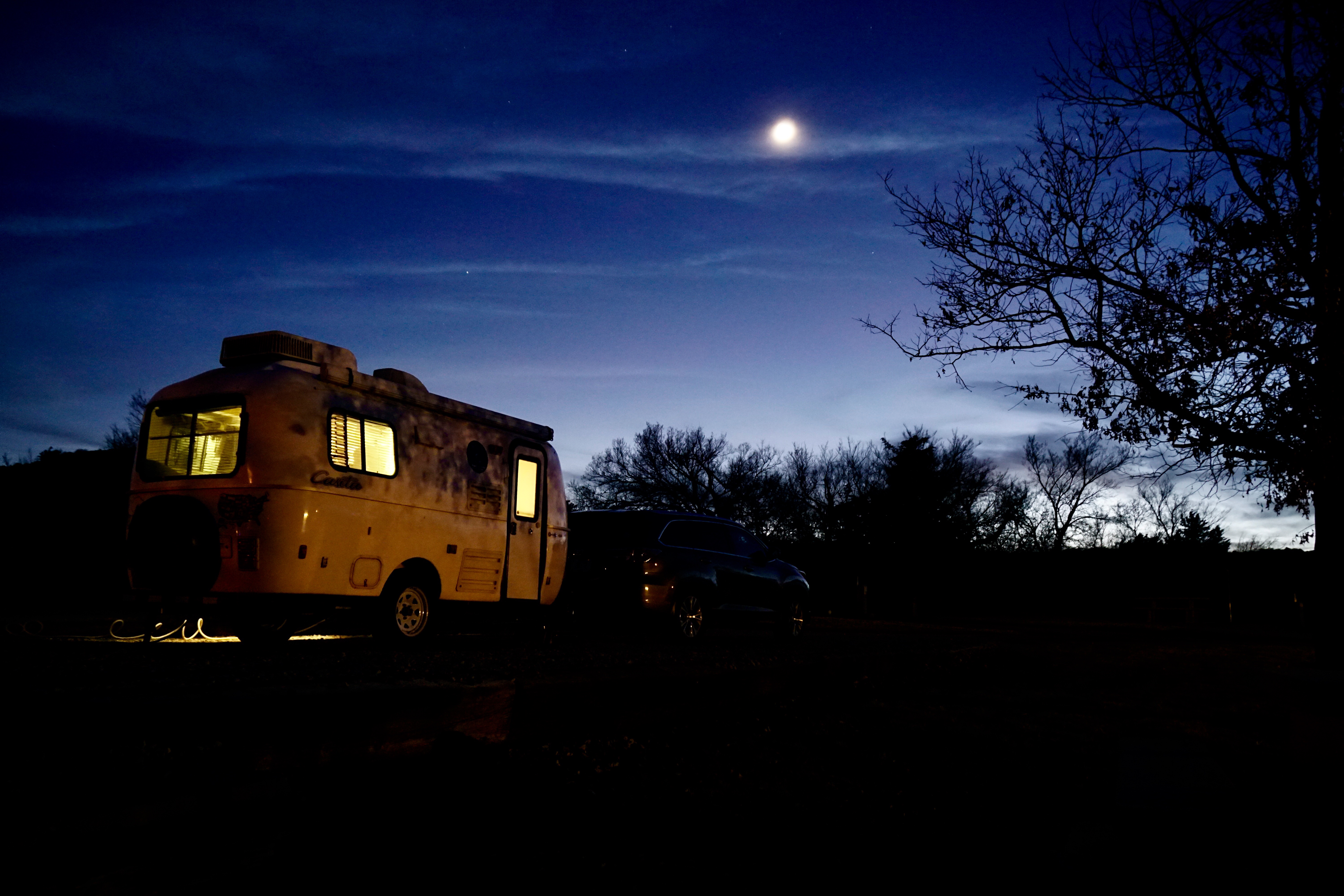 We are continuing our journey southwest through Oklahoma with plans to overnight at Great Plains State Park. A weather event is predicted for Friday, rain to the south, a snowy mix to the north. We are choosing rain. (The pictures interspersed below are from our drive through Wichita Mountains National Wildlife Refuge and our camp this evening.)

During long drives my mind wanders like a rat in a maze. But where a rat seeks its reward at one destination, I find rewarding thoughts at each turn… even at the dead ends. At one such “end” I recalled a phrase from ancient history, “Know Yourself”. It was attributed to Socrates who was said to admonish his students nearly 2,500 years ago to seek to know themselves before seeking knowledge of other things. The maxim actually predates Socrates and is found as one of 147 Delphic aphorisms (kind of an expanded 10 Commandments). There are also equivalents found in Egyptian temple hieroglyphics.

Know Yourself… There is what I know, a product of education and life experiences. The “physical me” is pretty straightforward. A genetic role of the dice where my parents were each a die largely determined many of my obvious and hidden physical characteristics. Except for the intervention of fate (as in an accident or outside agency) my life expectancy is even influenced by my genes. But what about WHO I am, the personality that is me.

We are products of natural selection (recent events in China may herald a change is coming). However, it may be instructive to examine what can be accomplished through “intentional selection”, as in the controlled breeding of animals. Selection can focus not only on physical characteristics but also behavioral ones. Great Danes are big and tall, Dachshunds are small and short. Similarly, Dobermans and Rottweilers stand at one end of a behavioral spectrum while Labradors and Cocker Spaniels inhabit the other.

What behavioral and personality characteristics within each of us may have a genetically influenced predisposition? I seem driven to travel. I derive deep satisfaction in bringing people together. I am a ponderously slow reader with abysmal spelling skills. These are just 3 of the traits that I have made a directed self examination.

If there is a “travel gene” I probably inherited it. My mother’s parents were immigrants from Lebanon, leaving everything known and familiar for adventure and the speculation of opportunity in America. My father’s parent were Germans from Russia, part of two mass migrations. The first occurred in the early 1800’s where hundreds of German families moved to the Ukraine at the invitation of Catherine the Great, and then again in the early 20th Century to America seeking escape from the oppression of the Bolshevik Revolution. Most of my ancestors remained in Lebanon, Germany, and the Ukraine. Not my grandparents. My mother and father each left their homes and families in pursuit of higher education, meeting at the University of Wisconsin and establishing their home in Illinois, far from their West Virginia and North Dakota roots. When I was offered my first job out of college the placement options were St. Louis and Kansas City. I chose Kansas City solely because I had never been there before. Genetic predisposition?

I have always tested well, except in spelling. I hated spelling bees because I would always be the last person chosen for a team… for good reason. No amount of tutoring seemed to help. Spellcheck and a wife who “spells for me” have been my salvation. I have to occasionally force my memory to recall the directions that b, d, z, and s face. I learned to read at a very early age, hearing the words as if spoken in my mind. I still read that way for pleasure, but not when reading was required in my professional work. Learned behavior? Genetic? Perhaps a combination.

Finally is there a social gene. A dear friend brought this to my attention saying that the “social gene” was strong in me. This caused me to reflect upon my past… childhood, gathering neighborhood children for group play… College, starting the Undergraduate Administration of Justice Association… Our return from the 2013 Camino, founding the Kansas City chapter of The American Pilgrims on the Camino… 2015, starting the Kansas City Metro Casita Owners group. And of course the delight in sharing our travels and “seeing” you cross-talk with one another in the comments to my posts. Genetic? Socrates would likely have castigated me for focusing on the irrelevant. What is important is that we can all be part of a larger family when we embrace what binds us rather than what divides us.

PS. We are in the Wichita Mountains of Oklahoma, among the oldest mountains in North America. Driving through the National Wildlife refuge we were surprised to see that the campground was open and fully functional! We continued on to Oklahoma’s Great Plains State Park with intentions to proceed tomorrow to northern Texas and then on to El Paso. We are the parks sole occupants… except for the coyotes.

PPS. If you would like to read the remaining 146 Delphic Maxims, here they are. #66 is especially profound! (from Wikipedia):

101 Regret falling short of the mark (or goal) (Αμαρτανων μετανοει)

133 Do not be discontented by life (Τω βιω μη αχθου)