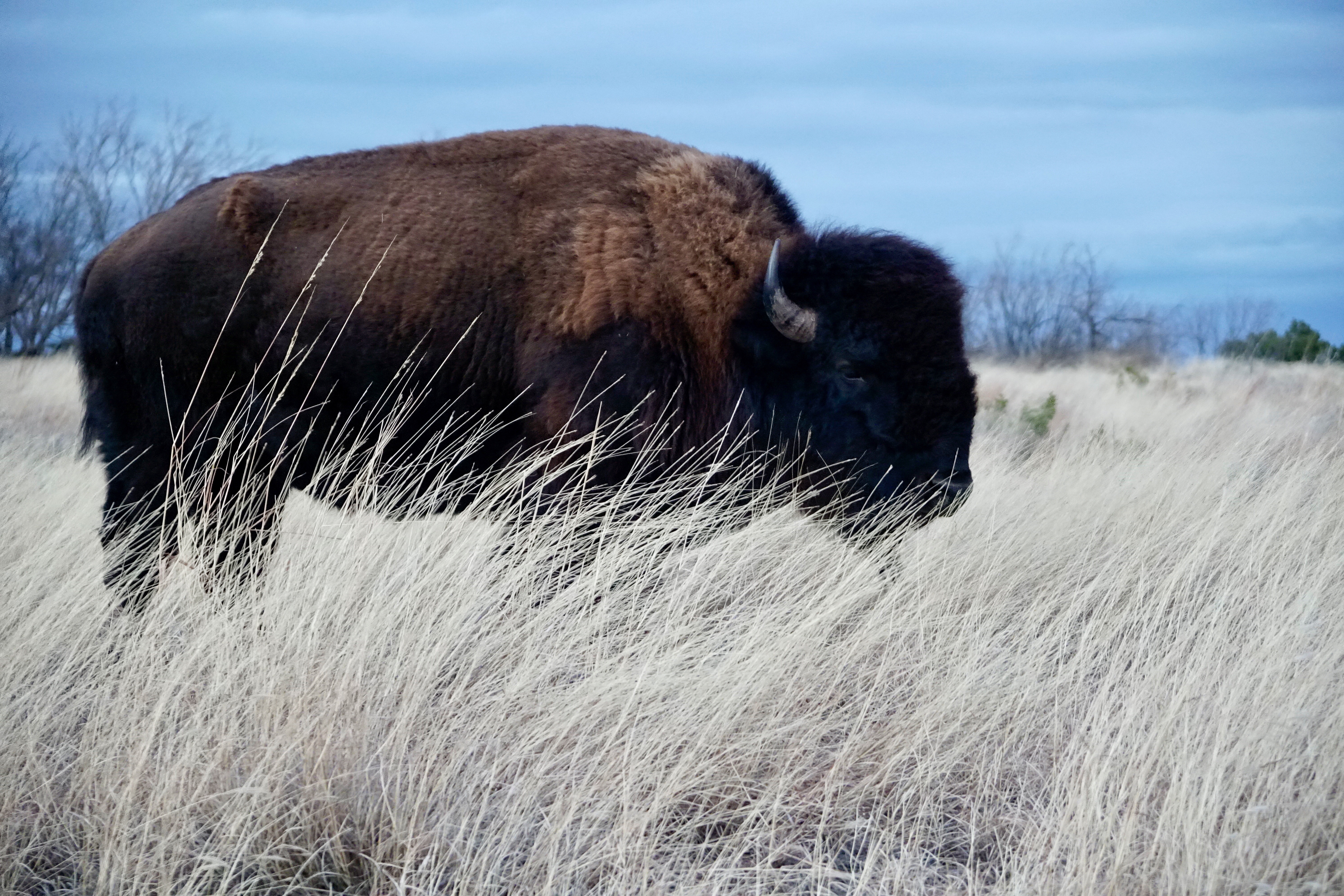 The weather favored us today. Although the temperatures dipped, the rain skirted us to the north. Temps are predicted to fall while the winds are increasing. They have conspired to encourage us to move further south in the morning. Whether we will continue south in Texas or head south west is up in the air right now. Current predictions are for more moderate conditions next week. We don’t mind playing this by ear as we are accustomed to planning on the fly.

Donning an extra layer made for good hiking… the scenery made for great hiking! Cap Rock Canyon is part of the Palo Duro canyon complex, 120 miles long and up to 20 miles wide it is the second largest canyon in the United States after the Grand Canyon.

Towering red buttes surrounded us and conjured up images reminiscent of the Egyptian monuments of Luxor. The near dry creek washes made for near level paths. There was evidence of Bison everywhere (big poop!) that demanded attention to one’s steps.

The red rock canyon cuts were laced everywhere with veins of gypsum. Gypsum is best known as the principal material in the wallboard of most homes built today. Less well known is that it is also a main component in most toothpastes and many cosmetics!

This region has been continuously inhabited and hunted by humans for upward to 15,000 years. The first people known to call this home were of the Folsom Tradition. Hunter-gatherers who were quick to adapt to the changing environment, they were a resourceful and inventive people. As we hiked it was easy for me to imagine the first peoples who claimed these canyons as their own.

It has long been a dream of mine to find an ancient flint tool that has lain undisturbed since it left the hand of its creator. I imagine my touch creating a direct link bridging thousands of years to the hand of another person. It hasn’t happened yet and it might never happen, but If it did happen upon Federal or State lands I would be legally bound to return the artifact to its original resting place. Nevertheless, I would contemplate how we each shared a moment of our lives in that place. How we might each appreciate the skill and “technology” invested in the creation of that simple tool.

Technology. It seems a strange word to apply to the fashioning of a stone into a useful implement. Yet the techniques that improved these tools advanced much as our electronics improve with each iteration. It is just that the leaps of ancient technologies advanced a millennia at a time rather than from week to week.

Millions of years ago a pre-human grasped a rock and at the same time mentally grasped that the power of his fist was thus magnified. Many thousands of years later an insight resulted in the fashioning of the rock to better fit the hand… an edge was found to lessen the effort for its use… a handle was lashed that further extended the power of the rock and had the additional benefit of distancing the user from the prey or adversary. Nearing the time of the Folsom people the handle had already grown long enough to make an effective throwing implement and a monumental improvement then followed in the form of the atlatl, a device that extended the throwing arm to release the spear with great force and effect. Social “technologies” concurrently developed that improved hunting strategies. Of course what followed was the bow and arrow, gunpowder, cannon… technology accelerating to the creation of civilization destroying capabilities.

It is easy to underestimate the impact of the early simple advances in the creation of tools. However, each of those technological leaps improved the odds that the strange creatures who had neither fangs nor claws might survive to avoid extinction.

Will the technologies that we have harnessed remain our salvation or instead be the agent our demise? If I ever find that ancient tool and then return it to its resting place, the person who next discovers it may know the answer.