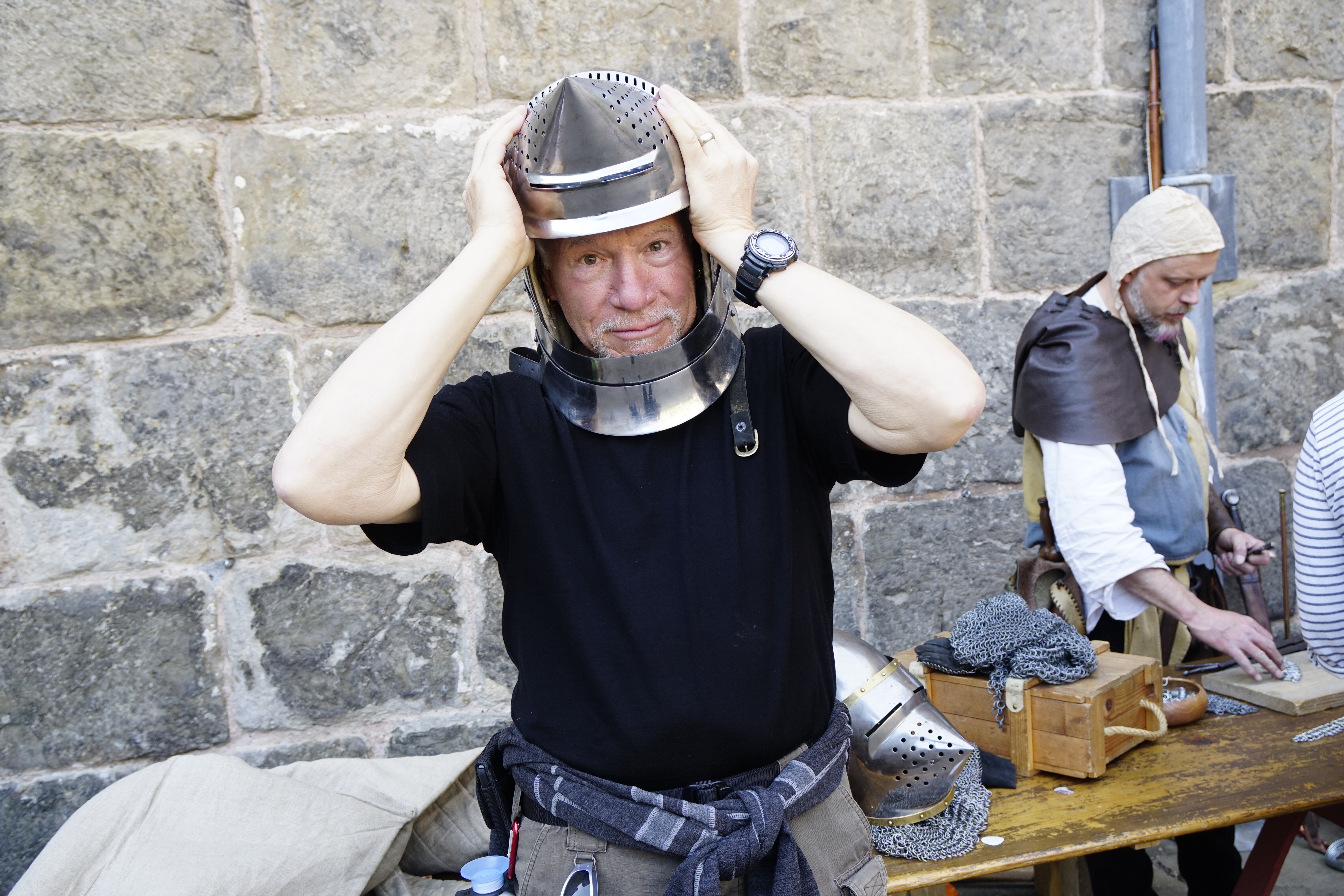 We returned to Chirk and a mooring beside the delightful “Poachers Restaurant” on our down-water journey. As promised, my errant hat was waiting for me at the hostess station. Taking nothing for granted while we were in Llangollen, I came upon a shop that had real Scottish Deerstalker hats for sale. I bought one “just in case” my original rattlesnake hat might have been lost forever.

Christine is a fan of the Deerstalker. I own a Meerschaum Calabash, though I have not smoked it in over 30 year. I look forward to modeling the ensemble of hat and pipe for the benefit of the grandchildren and as a tribute to my love of Doyle’s eponymous detective, Sherlock Holmes. Perhaps I can inspire one or more of them to read his adventures.

While Christine enjoyed some private time, Kris and I set out on an 8 mile round trip hike cross country to visit Chirk Castle.

Chirk Castle was built between 1295 and 1310 by Sir Roger Mortimer of Chirk. In 1322 he was locked up in the Tower of London for treason and died there 4 years later. Over the next 270 years the castle passed through the hands of 22 different nobles.

In 1595 it was purchased for £5,000 by Sir Thomas Myddelton and was held by the family until 1981 when it and 480 surrounding acres were acquired by Great Britain’s National Trust. The majority of the art and furnishings contained within the castle are original, and priceless.

We have visited a number of castles over the years, not the least of which was the Tower of London. Chirk Castle stands remarkable for the authentic pre-modern feel of its environs. There was even a dungeon located 42 steps below ground level. It was cold, dank, and foreboding. An iron link hangs from the wall where poor souls met their own personal hell. Paraphrasing from Dante’s Inferno, “Abandon All Hope, Ye Who Enter Here!” seems appropriate. Interestingly enough, at only 20 steps below ground was an upper dungeon that featured a fireplace, table, and some vestiges of ventilation. It was where prisoners were held who might command a ransom for the keepers.

This being Easter weekend and a Bank Holiday there were many visitors, but never so many as to depreciate the enjoyment of our visit.

One “Easter hunt” was the challenge to find small semi-hidden stuffed wolfs within the castle. It was an activity for the children, but adults could participate.

Announce the correct number of hidden wolves at the end of the visit and you get a gold “well-done” sticker. Kris and I are happy to announce that we were among those who were successfully observant! The theme of wolves, as opposed to Easter Bunnies, is due to the history of the castle. Wolves were once kept on the grounds and chained as guards at the portcullis entry.

Another quirk of history attached to the castle has to do with the 1801 creation of the Chirk Tunnel on the canal. The Myddeltons of Chirk Castle took umbrage with the notion that a canal might despoil their view of the valley below. Thus they insisted that the canal be rerouted through the mountain rather than around it. Certainly this was not only proof of their influence, but also that the concept of “nymby” (not-in-my-back-yard) was alive and well 225 years ago.

Tomorrow we bid farewell to our dear friend and travel companion Kris Ashton. Christine and I look forward to further honing our narrowboat skills during a week of solo cruising before welcoming our Canadian friends Tom and Nanci aboard for our final week on England’s canals.