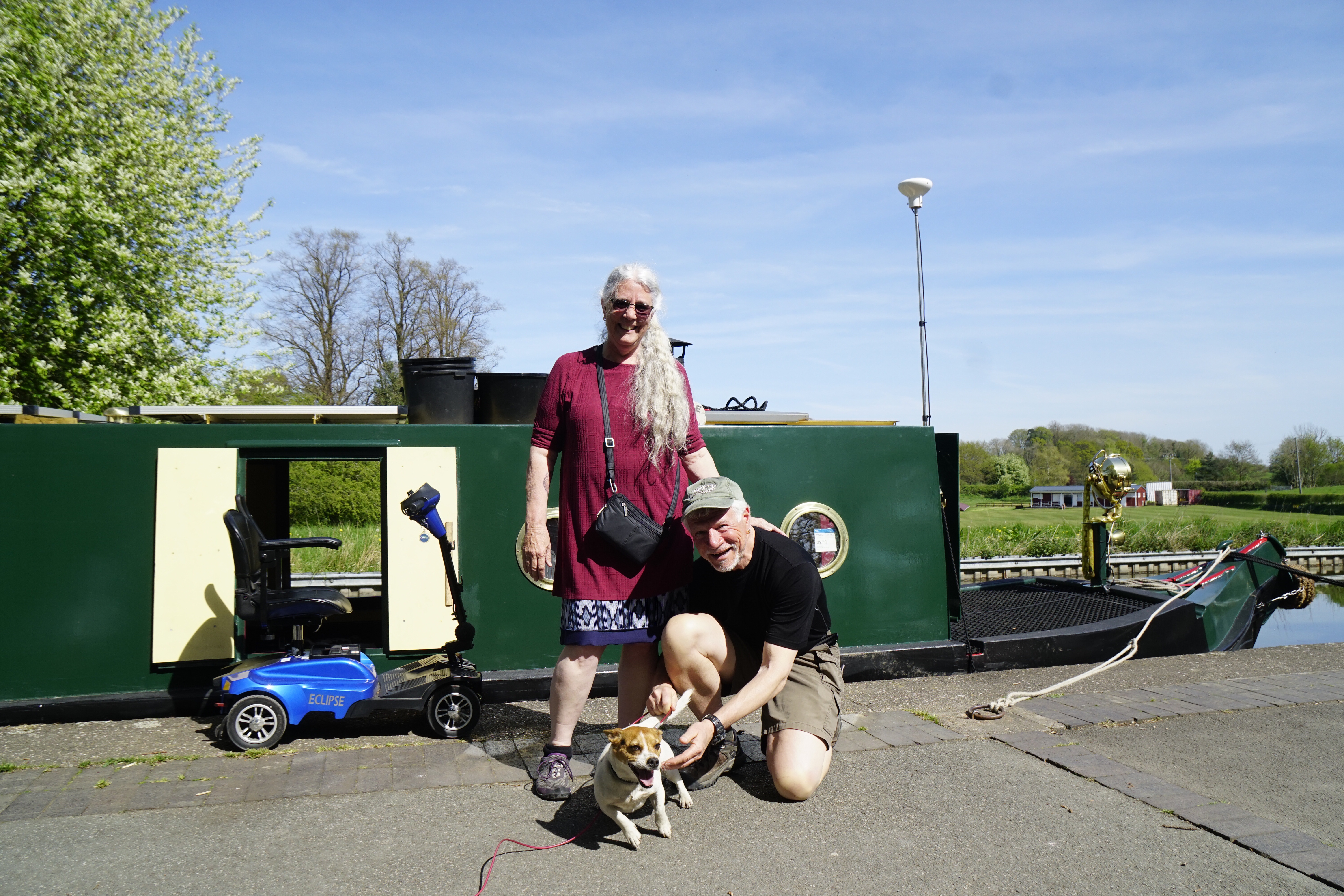 We have returned to spend the night moored at Ellesmere… and so it seems has everyone else! This is Easter weekend and a prime time for narrowboaters. We secured the last available spot along the town wharf and took the opportunity to visit Tesco and re-provision.

Walking down the line of moored vessels we beheld an array of boats that shared only two characteristics, they are long and they are narrow. Beyond that there are some painted battleship grey, others in Scandinavian multi-color. Brass is polished on some, others not so much. At the extremes were vessels that could be classics in a museum and at the other end of the spectrum those that can only be described as “feral”.

We passed a real standout of the former category, the vessel Namaste. She was pristine, and supported a huge brass searchlight at the bow that was polished to a jewelry shine. It was the open hatches amidships that drew my attention.

For those who have ever visited a classic car show, you know how 60 year old Corvettes and 60’s era muscle cars are staged with hoods open to display spotless chrome garnished engines. Well, peering into Namaste’s open hatches I beheld the narrowboat equivalent. As I pointed out some of the finer details of this wonder to Christine, a very nice lady of our generation cautioned me, “If Les hears you he will talk your ear off and never let you go!” Of course, I thought she was merely being pleasant and not being literal. I was wrong on the second count. Les heard me, and like their little dog “Lucky” was on me like a Rat Terrier is on a rodent. We had just met two of the most likable folks (and their dog) plying these waters.

The couple have been together 6 years. Namaste is Les Walling’s third canal boat and clearly his passion. I wish that I had the time to more fully explore his life story, but I know that he has extensively traveled the United States, and he was once a well know off-shore powerboat racer (“Peter, In my past If it went fast I drove it… Look at me now throttled down to 4 miles per hour!”). Les told of his last vessel, nearly lost in a flood enhanced tidal current on the Thames near London. He and Sue were ashore when the unexpected surge tore his narrowboat from its bow and stern lines. Held only amidships, but cantered 90 degrees to the current she was beginning to roll and capsize. Lucky and all their belongings were aboard (Les and Sue are full-timers). In order to have any hope of saving the moment Les was forced to cut the boat loose and hope for the best. The best came in the form of crew aboard another vessel who leapt aboard, engaged the engine, and succeeded in bringing the boat back with nary a scratch! Another example of a boating “angel”.

Les is proud of his thick Lancashire accent. He makes no bones about retaining it untamed to his grave. I confess that there were times in the conversation that I thought I was listening to another language. Nevertheless I was able, at times with Sue’s help, to decipher most of the conversation.

For the mechanically inclined here are some of the details that Les shared about Namaste: She is a 60 foot long Tug-Narrowboat with thrusters fore and aft. The hull is new and he is in the process of designing the paint job that he will execute as a part of her fitting out. The engine, restored by Les, is a 70 year old Gardner 2LW that makes only 28 horsepower from her 2.8 liter displacement. What she lacks in horsepower she more than compensates for in massive torque. She turns a flywheel that is over 100 pounds, and in turn powers a huge prop through a modern hydraulic drivetrain. The engine idles at less than 400 rpms and makes 1,300 rpms at maximum throttle. She turns only 650 rpms to cruise 4 mph. Modern diesels will be decades in the junkyard when the Gardner is still powering boats on the canal.

Les has installed 8 solar panels, a 3kw inverter and has a massive bank of batteries with a capacity of over 1200 watts. Now back to the rest of you readers.

Les has Parkinson Disease. It is profound and he carries aboard a power chair as a mobility assist. Sue told me that when he announced his intention to take on the Namaste project and Gardner power plant restoration, she discouraged him because of his condition. He scoffed and said that he wasn’t done with life yet… and indeed the proof of those words is to be beheld in his craftsmanship and energy.

In this wonderful encounter I am again reminded that the rewards of travel are found in the people that we meet as much as in the sights that we see.

Peace Everyone, and Happy Easter. Pete