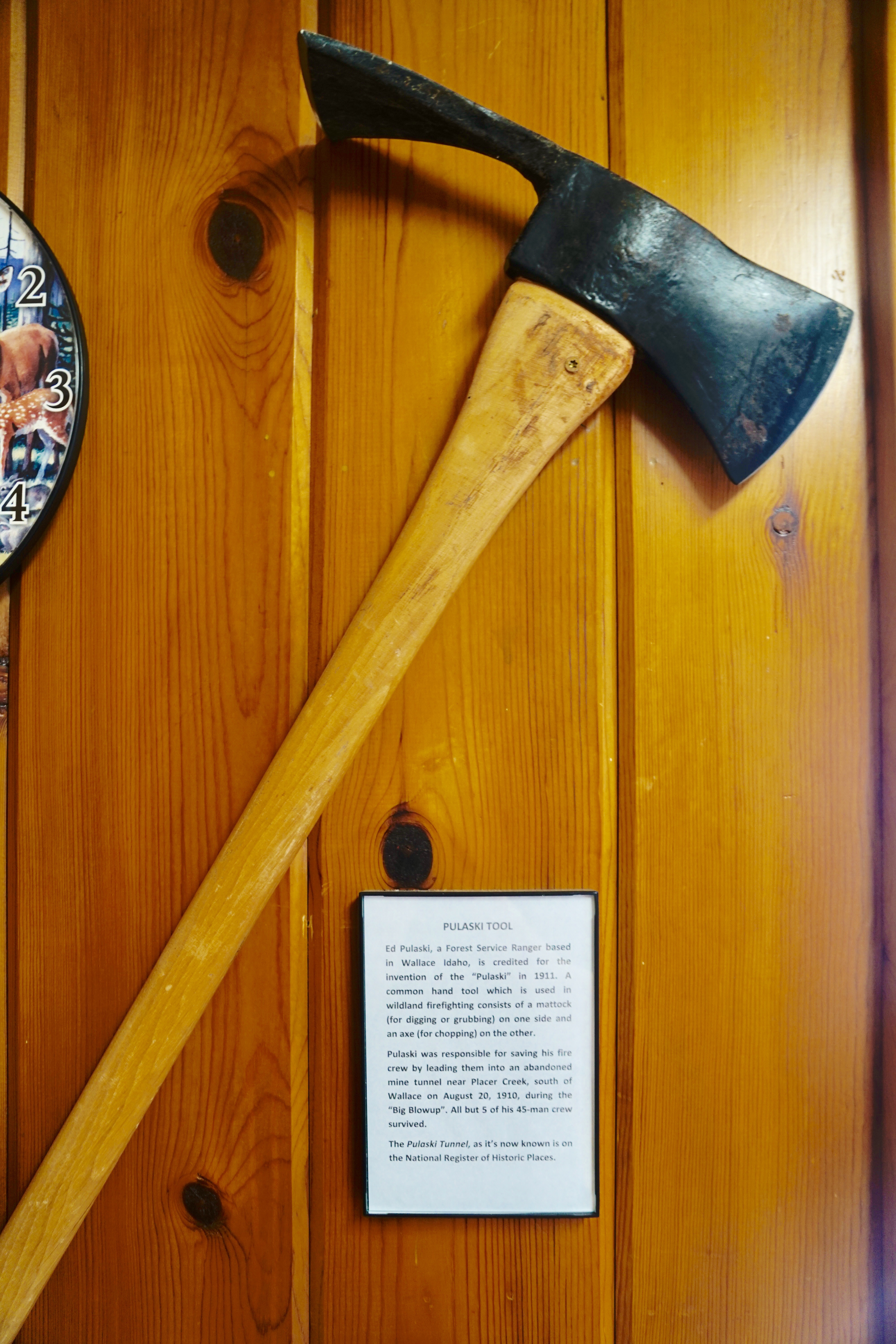 I made it to Missoula Montana last night, but struck out trying to find an available campsite late on a Friday. This area north and west of Missoula is extremely popular with campers this time of year. I did a fallback to an overnight in a huge Pilot Truck Plaza. On the positive side I got all my laundry done for less than $3.00, and there was a terrific stand-alone bar & grill restaurant where I enjoyed an excellent dinner and a breakfast the following morning. I also had a good cell signal and the opportunity to research camp options for the two nights before my reservation in Wallace Idaho.

I found that there were a number of US Forest Service campgrounds on the route to Wallace. None of them take reservations, which is a plus on an otherwise busy weekend. I elected to head 90 miles up the road to one named Cabin City.

22 campsites, water, picnic tables, fire pits and pit toilets. With my “geezer pass” the cost was $3.50 per night!

Cabin City is located a little over 2 miles off the expressway in a dense pine forest. The park road is paved, the sites are level, and all facilities are spotless thanks to Susi and Tom, the volunteer campground hosts.

Susi and I engaged in a lengthy conversation about the area. The campground is a mere 20 minute drive from the “Route of the Hiawatha” bike trail, and is actually a more convenient launching site for that bike ride than my reservation in Wallace Idaho. She also shared that just 5 miles down the road is the remarkable Savenac Historic Tree Nursery. I would have probable passed on it, except that Susi (who was a former volunteer there) was so insistent that I not pass it up. It was my good fortune that she pressed the point.

Elers Koch was a man who loved trees and who had vision that spanned beyond a human’s life-time. While on his honeymoon In 1907 he came upon an abandoned homestead located along Savenac Creek and the original Mullen Road which was built between 1859 and 1863. This was the first road engineered in the northwest, connecting Montana, Idaho, and Canada. It later morphed into the Yellowstone Trail… a portion and bridge are still visible.

Koch determined to build a forest nursery on the spot. Work began in 1908 but tragedy struck in the form of the “Big Burn of 1910”. A number of smaller forest fires, aided by drought and tinder-dry conditions grew to become a single conflagration that ultimately consumed the nursery, nearly 4 million acres (roughly the size of the State of Connecticut), and snuffed out the lives of 79 Forest Service Firefighters.

The fires of that season created similar catastrophes in other parts of the United States, most notably Michigan.

With the ashes still smoldering Koch began clearing his nursery of the charred detritus and readied the land for replanting. He was determined to reforest the region. Soon the Savenac Nursery became a pioneering research facility creating innovative ways to propagate and harvest trees for replanting. By the mid-1930’s Koch’s nursery grew to become the largest producer of tree seedlings in the United States, shipping over 3 million trees annually. In 1935 200 men from the Civilian Conservation Corps (CCC) cleared land for expanded operation and built the facilities that can be seen today at the Savenac Historic Tree Nursery.

The oldest building on the grounds was built in 1930 and is available for use at no cost…it is an outhouse.

The Nursery grounds are impeccably maintained by volunteers such as Andrea and her husband Walt.

She serves in the Administration building which features a museum for the Nursery and also the Big Burn.

Within the museum is a photo reproduction of the daily log entries of the CCC workers in 1933. Clearly idle hands resulted in some artistic entries that were not necessarily relevant to the Nursery.

Walt tends the grounds and physical facilities. Today he was aided by two young volunteers as they readied for the coming week’s “Passport in Time” event.

Each year over 40 volunteers assemble for the week, and much like the CCC of old they lend their muscles and talents toward maintaining this treasure. It is not all work as there are communal meals prepared for the workers, they sleep on-site (either in the buildings or their own campers), and each evening there is a grand campfire gathering and just maybe some liquid libation to go around.

There is professional staff as well. It was my good fortune to spend time talking with Erica, a very personable mother of 3, wife to a “smoke-jumper”, and holder of advanced degrees in Cultural Anthropology and Archeology.

She also has a “take no prisoners” handshake that one won’t soon forget.

The Cabin City campground and the Savenac Historic Tree Nursery may just be the top finds of this trip. I have decided that after my four days in Wallace Idaho I will retrace my steps back this way and spend another couple of nights here as I head down to Salt Lake City and then east back to Denver.

Tomorrow, weather permitting, I bicycle the Route of the Hiawatha, it’s tunnels, trestles, and through the 8,765 foot long Taft railroad tunnel. Until then…

PS. Don’t be surprised if in the next couple of years the “Family Schloss” children and grandchildren all join here to take advantage of the bunkhouse… or Christine and I decide to lend a hand at a Passport in Time gathering!