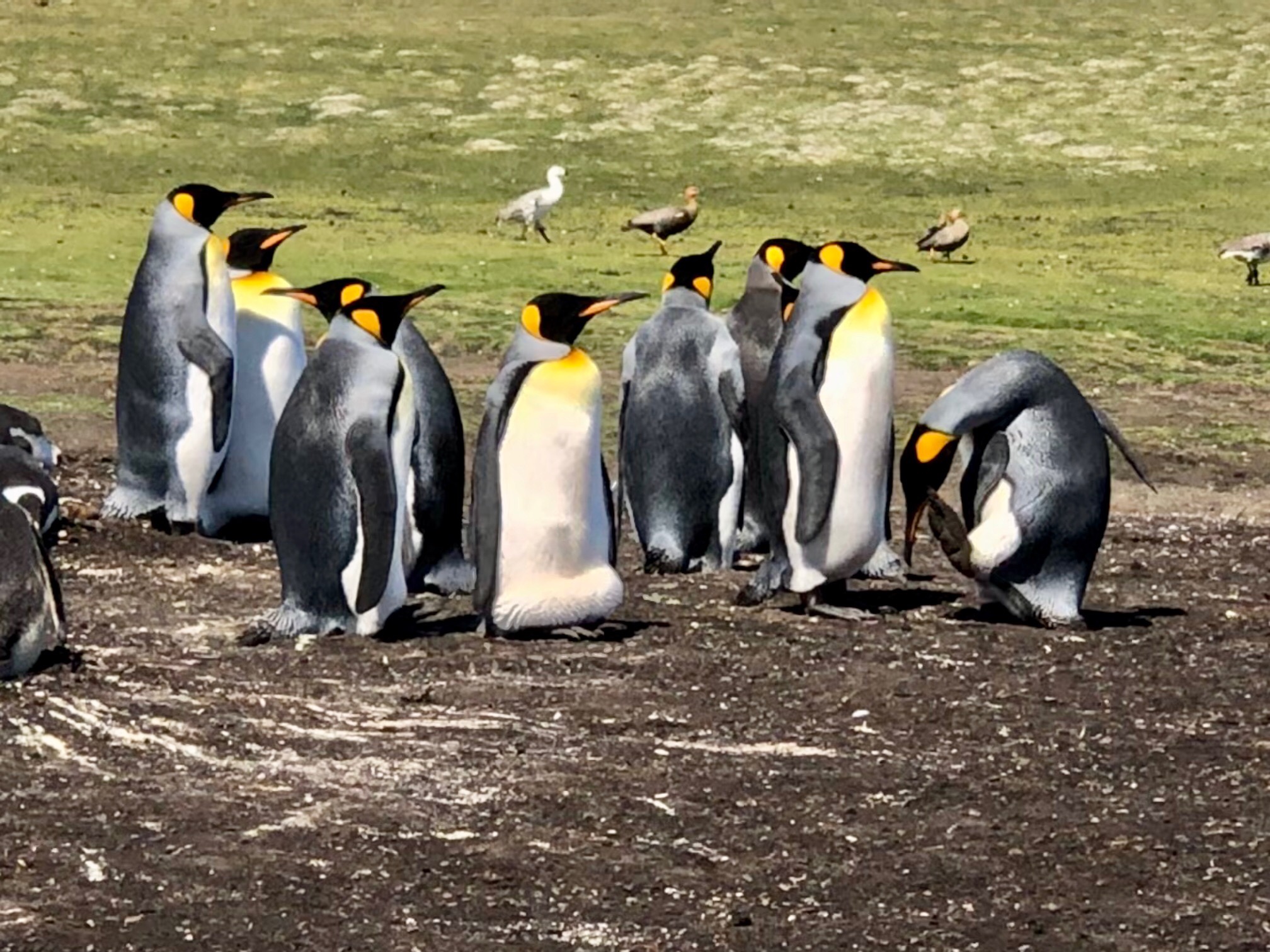 To most in the Northern Hemisphere it is an insignificant archipelago consisting of two main islands and nearly 800 small ones. However, to its 3,500 residents it is home. It is one of the most barren and sparsely populated places in the world, and its total land mass is smaller than the State of Connecticut. It ranks 7th from last in the world among 229 nations in gross domestic product. There are sheep, a lot of them. There are tourists, a few of them, and darn little else. Exploration has yet to yield any exploitable resources, whaling is a thing of the long ago past, and the decline of fishing is a very real result of the impact of climate change.

The hulks of abandoned vessels remain as a metaphor to what has never been and will likely never be.

Yet… Port Stanley is a charming and vibrant little community that features one Post Office, one bank, one shopping store, one gas station… and pretty much one of everything else that symbolizes civilization, including one brewery (Falkland Beerworks) and one distillery (Falkland Islands Distillers, founded 2016).

Owner, Richard McKee kindly showed me his 2 stills and allowed me a sample of the excellent gin. I did not leave empty handed. Oh yes, there are 6 taverns and 8 Legislators.

This is (literally) the Legislative House for the Island.

This is Christ Church Cathedral, the southern most Anglican Church in the world. The “arches” outside the church are the jawbones from 4 huge Right Whales harvested over 100 years ago.

Why then in 1982 would Argentina invade this peaceful nation and seek to subjugate its English speaking people who have a deep and historical connection to the United Kingdom and its Queen? Why then would England launch its largest naval task force since the Second World War to repulse the invaders?

37 years after the war the Falklanders are still haunted by lethal reminders. The Argentine Army placed tens of thousands of land mines in hundreds of strategically located minefields around Stanley and throughout the islands. Teams of experts have worked since the end of the war to locate and remove the ordinance. Six casualties are attributed to these efforts. It is hoped that the remediation will be completed by the year 2022.

Argentina’s claim to the Falklands is founded in the assertion that prior to 1832 they were considered part of the Provinces of the River Plate which later became part of modern Argentina in the mid-19th Century. Britain’s dominion has been continuous since 1832.

Perhaps Argentina’s ruling dictatorial Junta sought to deflect the attention of its citizens away from the country’s social and economic problems. Perhaps the ruling generals believed that Britain’s female Prime Minister lacked the resolve to respond. In any case, “The Iron Lady”, Ms. Margaret Thatcher was more than up to the task. The Falkland War lasted barely 70 days and ended with Argentina’s surrender and the fall of its military government.

Unfortunately, Argentina persists in its claims, even formalizing them within the provisions of its Constitution. The Falkland Islanders have no desire to become Argentina’s subjects. They acquired full British citizenship in 1983, and thus the elements remain in place for future conflict.

Two thirds of the Falkland residents live in the colorful town of Stanley. Everything in the Islands outside of Stanley is called “Camp”. Elementary School outside of Stanley is conducted by teachers who travel a circuit. High school age children from “Camp” attend boarding school in Stanley. University education is pursued in Great Britain, entirely paid for by the Falkland government.

There is a small (24 bed) hospital that also features one ICU bed and one maternity bed. Specialist are flown to the Falklands when needed, but any planned procedures are performed in Great Britain. All medical care, including transportation costs, are government furnished. Immigration, including by UK citizens, is strictly limited. However, any citizen of the Falklands may freely live anywhere in the United Kingdom.

The Falklands are located about 750 miles from Antarctica. It’s climate is tundra and subantarcic oceanic. The weather for our visit was cool, but otherwise spectacular. One very seasoned traveler said that of his 7 visits to the Falklands this was the first time that he saw the sun and it was not raining.

These remarkable birds have wingspans of up to 12 feet, mate for life, and have a lifespan of over 40 years. They have the ability to fly over 10,000 miles without landing!

Viking Sun, though it is considered a small cruise ship, is too large to enter the harbor. Our access to the harbor was accomplished by a continuous rotation of the ship’s tenders.

We were fortunate to share much of our time in the Falklands with Larry and Sharon, our friends from Colorado. None of us ever imagined that the day would come that we would step foot on this incredible land.