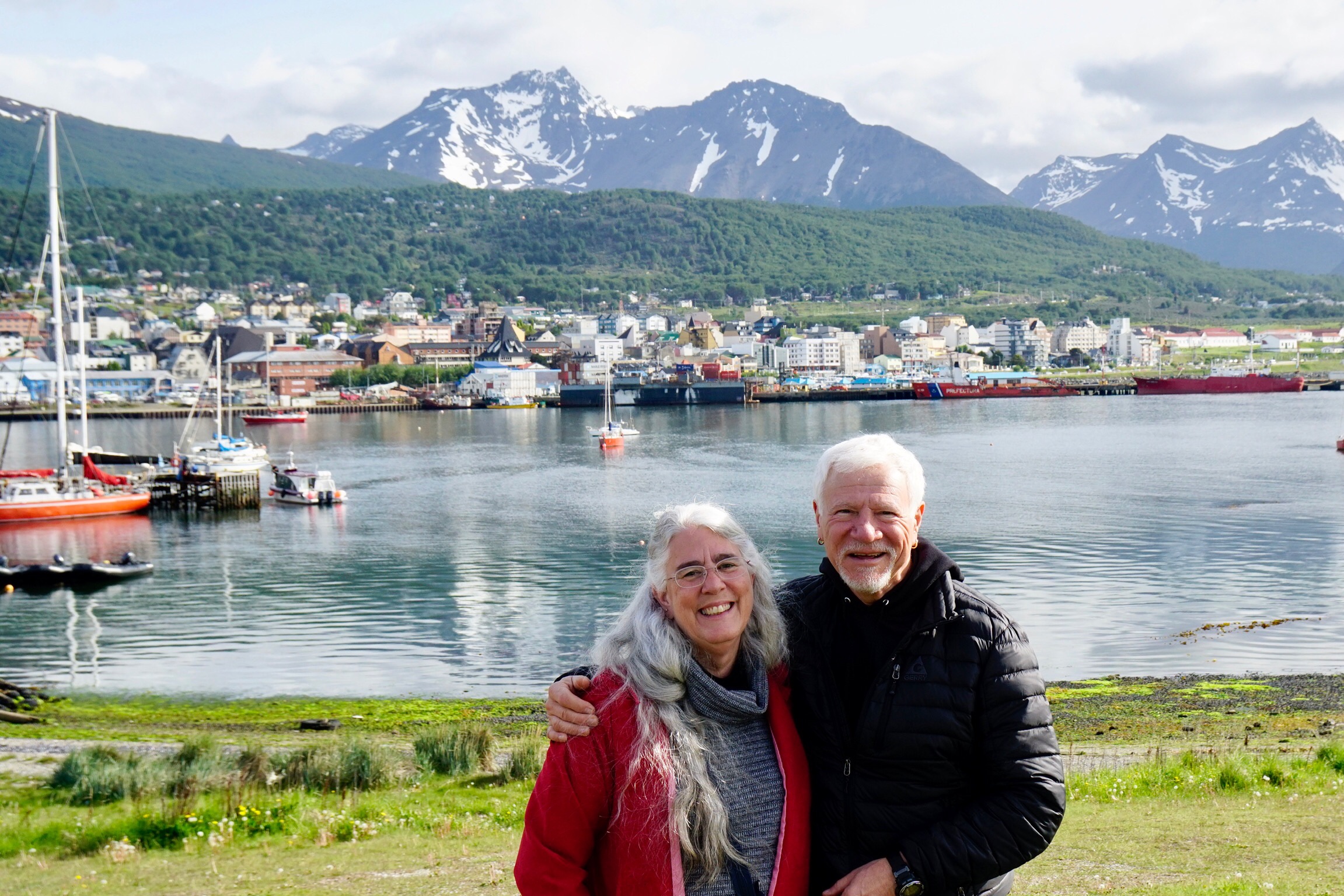 Our overnight 24 hour ocean passage from the Falkland Islands to the Beagle Channel and Ushuaia, Argentina, gave a hint at what the whims of the weather gods could offer to the unsuspecting mariner. A following wind gusted to over 35 knots and seas built to 15-20 feet.

Our vessel and crew were more than capable, but a wine glass on our dresser tumbled to its demise by gravity’s invisible hand.

We are quite literally at the end of the civilized world. Ushuaia, Argentina, is the southernmost city in the world. It was founded in 1884. With a population of approximately 60,000 it is a popular tourist destination for travelers who arrive by ship, train, highway, and air.

Ushuaia is the point of departure for most tourists who seek to check off a journey to Antarctica from their bucket lists. The city’s motto, “Fin del Mundo, principio de todo”, translates in English to “End of the World, beginning of everything”.

As inhospitable as the region is, it has been a place of human settlement for 10,000 years. Tierra del Fuego (land of fire) refers to the visage seen from ships of thousands of fires tended by the natives. These days the lights ashore are furnished by electricity.

In 1896 a prison colony was established here, not unlike Britain’s Tasmania and France’s Devil’s Island, where the nature of the island and environment contributed as much to the confinement as did prison walls and bars. Convict labor was instrumental in building the town infrastructure, including the prison, roads, and a narrow gauge railway. The prison was closed in 1947.

We participated in a 2 hour overview tour of the city which was hosted by Cami, our delightful guide.

The city is situated between the southernmost extent of the otherworldly Andes Mountains and the legendary Beagle Channel that offers some protection from the rages of Drake’s Passage as one passes from one great ocean to the other.

We have been two days in this port and there is too much for me to say in a single post. Therefore, I will focus my thoughts within this post on Ushuaia and reserve our experiences in the nearby Parques Nacionales Tierra del Fuego for a second post.

The bustle of Ushuaia belies it’s geographic remoteness. Trip Advisor lists over 100 restaurants that are open for dinner. There are hotels, banks, casinos and nightclubs… even a Hard Rock Cafe. Of course, there is no shortage of shopping for locals and tourists alike.

Every war creates two narratives, one written by the victor and one by the vanquished. Port Stanley in the Falkland Islands tells a very different tale from the one recited in Argentina. Argentina has not relinquished its claim to “The Malvinas”, the name by which it refers to that archipelago.

Ushuaia is Argentina’s declared capitol of The Malvinas, and the seat of its “government in exile”. It is also the site of its monument dedicated to the memory of the Argentine soldiers who lost their lives in that conflict. Neither they or Argentina’s claim to the islands are forgotten.

Our evening on the 25th concluded in town with a wonderful dinner at Isabel Cocina. The house specialty is a dinner for 2 served piping hot at table in an iron pan. The dish features your protein of choice simmering in a stew of vegetables and paired gravy. We could have opted for chicken, pork, lamb, or an incredibly huge crab which is fresh caught in the Beagle Channel… it was a pair of beefsteaks for us. “Starters” are available but not encouraged as the large loaf of oven warm bread is the perfect starter when enjoyed dipped in the main dish sauce.

The dinner for two, including drinks and gratuity, was $20 US. The experience was priceless.

PS. Part 2 will follow with a focus on the nearby National Park. Also, we are scheduled to round Cape Horn at 7am (4am US Central time) Wednesday, November 27th.