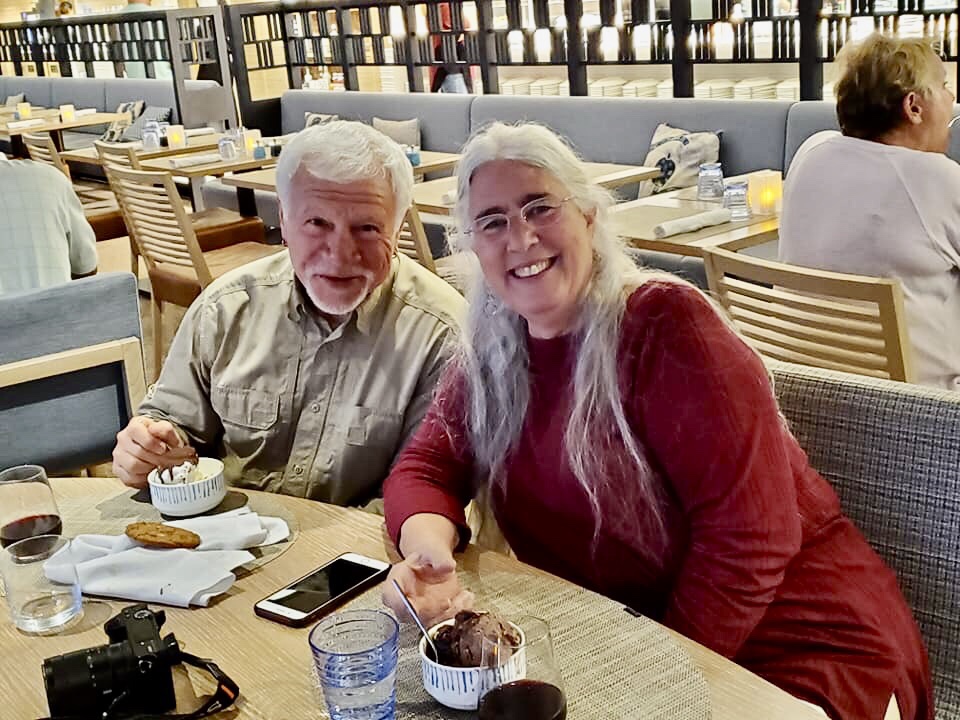 22 days… of luxury, pampering, new friendships, and excess have come to an end.

I heard it said in (partial) jest that a passenger who awoke in the middle of the night for a trip to the bathroom returned to bed a few minutes later only to find that the bed had been made. That pretty much summarizes the level of daily attention that we received at the hands of our personal cabin stewards.

We will miss the friends… friendships forged with both passengers and crew. Reality dictates that most of our paths will never again cross. That does not mean that we will lose touch. It had been our nature to maintain contact with those with whom we have bonded, if they are willing. In this, technology has been our ally. Our home remains open to those who wish to pass through Kansas City and we are energized by the prospect of those reunions.

I wander further down the path of partings In a subsequent post. Here is a summary of our day in the port of Valparaiso.

Valparaiso is a metropolitan community of about 500,000 that is spread across 42 hills. Over 30 rickety looking funiculars once aided access to the hills. They date to the late 19th and early 20th Centuries. Today only 10 remain operational, but efforts are underway to preserve these treasures, much in the way that San Francisco has preserved their cable cars. (The image is from Wikipedia).

The port takes the form of a horseshoe as the hillsides drop precipitously into the sea. There are a couple of attractive beaches, but they can be treacherous. The Humboldt Current is the Southern Hemisphere’s answer to the Atlantic Gulf Stream. However, where the Gulf Stream is a “river” of warm gulf water channeling north, the Humboldt is a “river” of Antarctic chilled waters that travel north along the western shores of South America. The waters at Valparaiso never warm above 50 degrees. Swimmers must not only brave the cold and currents, but the lack of a wading area. Only 60 feet offshore the waters are over 30 feet deep and dropping rapidly.

Valparaiso’s golden era was from 1885 to 1914. During those years merchant trade found this to be the west coast port of preference before and after passages around “The Horn”. Furthermore, nitrite was discovered in the region, a crucial component in the manufacture of explosives. During that time 90% of the world supply of the mineral was exported from Valparaiso. 80 major ships a day called in this port.

All of that changed in 1914. The Panama Canal opened and German chemists were able to manufacture nitrate on a commercial scale. Overnight Valparaiso descended from the wealthiest city in South America to a near ghost town. It’s recovery was slow but steady. Today, virtually all of Chile’s wine and agricultural exports exit through this port. It also hosts a thriving artist community. In 2003 the historic quarter was declared a World Heritage site.

Chile is the longest “skinny” country in the world. It is over 3,000 miles long with an average width of only 90 miles. It’s Navy is the strongest institution within the country… a necessity given the extensive shore it must defend. In the central Plaza Sotomayor stands the monument given to honor the Nation’s fallen sailors in the 1879 Battle of Iquique which was fought in its war against Peru and Bolivia.

Our visit to Valparaiso was largely uninspiring. Recent political unrest and longer term economic difficulties reveal themselves in extensive graffiti and the derelict buildings of the port area.

There were some bright spots. Among these were visits to a cultural museum that had an excellent section dedicated to Easter Island, and a visit to the attractive cliffs located near the city cemetery.

Outside of the museum stands one of the Easter Island figures that was taken from its home.

Inside were artifacts, including a piece of wood that bears native writing that has yet to be deciphered.

In fairness to the city, it is a major center for higher education with 14 universities and one-fourth of the urban population engaged in higher education. It is a cultural center as well that attracted immigrants from across Europe. Many neighborhoods still mirror the architecture of their original settlers.

I regret that I do not have more images to share, but the 2 hour bus ride had only 3 stops and barely touched the surface of what a longer stay might have revealed.

The end of the day and the day that followed will be featured in my next post.