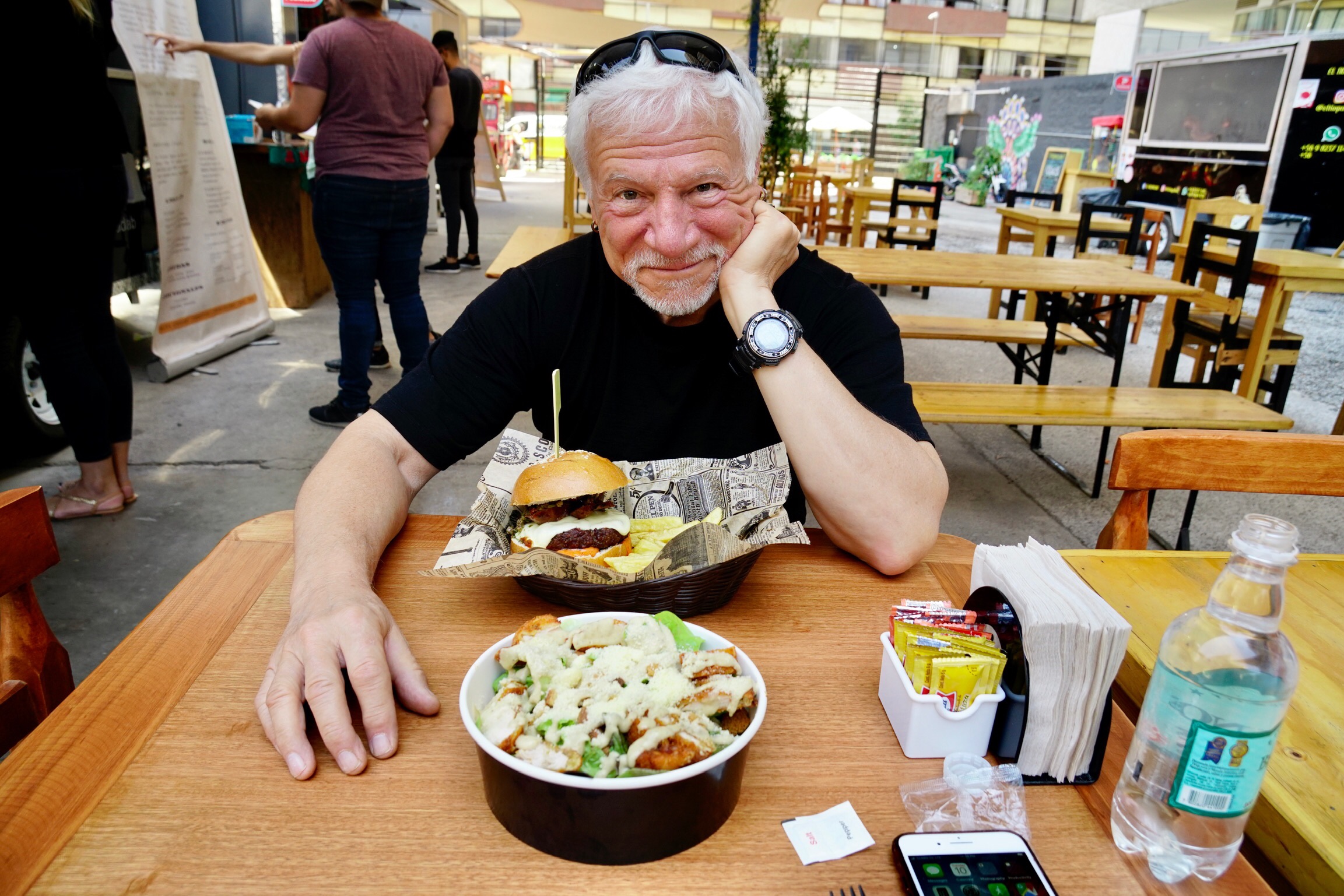 Imagine for a moment that for the last 22 days you have been a player in a game. There aren’t many players, but they are all like you and they like you. The host of the game provides a staff to grant your every want, need, whim, and even whimsy. The rules of the game are clear, familiar, and designed for your success.

Now imagine voluntarily choosing to leave that game for a different one. The new game has over 15 million players, 7 million of which are in your immediate vicinity. Very few are like you, and you really don’t matter to them, or the host. You have the barest understanding of the rules, and you have to define your success in terms of just making it from one day to the next. Oh, and virtually none of the players speak your language.

That pretty much describes what we have done in departing the Viking Sun and traveling solo into the heart of Santiago, the capital of Chile.

Most Viking passengers who departed ship yesterday were heading straight to the airport to board planes for home. We had elected to spend a few days on our own in Santiago. The first challenge was to make our way from Valparaiso to Santiago, which is about a 2 hour drive into the interior.

Uber operates in both Valparaiso and Santiago. What could be simpler?! We scheduled an Uber to pick us up. The fare would be half what the port tour operator quoted, $100 US instead of $200 US for the transport. Unfortunately, one of the new “rules” came into play as I received notice that our Uber was arriving. Unfortunately, Uber is not allowed into the drive at the passenger cruise terminal. It seems that only the port tour operator and a few select taxi companies are. What’s more, we are not allowed to simply walk out of the terminal. It is required that we be shuttled from the terminal into the city proper. We lost our Uber.

The shuttle driver who spoke virtually no English nevertheless understood our situation. Outside the entrance to the terminal drive he pulled over in a spot where a few taxis were parked. The drivers were milling about in casual conversation with one another. He hailed one of the drivers and spoke to him in Spanish. The taxi driver in turn smiled at us and in broken but serviceable English said that he would drive us to Santiago. He quoted a fare on par with Uber, but cash only. Our decision was based upon the “bird in the hand” philosophy liberally seasoned with trust. We were to learn that this kind gentleman was Alex Calquin. I helped Alex put our bags into the trunk.

The 90 mile drive was indeed 2 hours long. It included a stop for gas which was a great relief for us as I was not sure that I could make it without a “Baño break” (bathroom). The Shell station also had a McDonalds, and wonder of wonders an ATM where we could supplement our barely sufficient cash to pay the fare.

Alex was wonderful! He gave us a running commentary on the drive, highlighting the sights, giving insight into the current events and speaking with great pride about his sons and 13 year old daughter, Francesca. He was apologetic about his combination English/Spanish, which was infinitely better than my Spanish. I was able to decode most of what he said.

The topic of family came up because I asked about a cute pencil drawing that he had stuck on the dash of his car. A gift from his daughter that keeps her near to his thoughts. Daughters are like that, even in their 30’s and 40’s… I am finding the same applies to granddaughters as well.

As we approached Santiago the traffic grew brutal. Alex avoided portions of the gridlock by detouring down neighborhood streets that I would not have chosen to walk, day or night.

Alex delivered us to our lodgings and himself into our hearts.

The “San Martin Downtown Hotel”, where I had booked 3 nights on “booking dot com” was not a hotel. The exterior is stark with a decidedly Eastern European Communist era flavor to it.

There was no marquee other than the address. The front desk was really a security station with a large screen TV simultaneously displaying at least 30 camera feeds. The man at the counter looked at the confirmation documents that I presented and then began to text to me with Google Translate. He would have to call for someone.

30 minutes later Juan arrived. In his 40’s and with a bubbly personality he ushered us through the security doors and onto the elevator. As we ascended to the 6th floor of the 17 floor building he explained in passable English that it was not a hotel, but an apartment building in which he managed a number of flats as guest rooms. I guess “Booking” did not have a box for that category of lodging. For $75.00 US a night I shouldn’t complain.

Fortunately the small unit was pleasant, clean, and serviceable. It includes a kitchenette and balcony. The balcony looks out upon a similar grey concrete apartment building where we are able to quickly identify the age, gender, and girth of the occupants by the laundry hanging to dry on their balconies.

6 stories below us a non-stop symphony of blaring horns, shouting drivers, and general road noise guaranties that the glass door to the balcony of this non-air conditioned flat will remain closed. Temps are in the upper 80’s, but the humidity is low and there is a fan in the bedroom. It just gets better and better.

We unpacked and took a stress nap. Businesses are typically open in the morning until around noon and then close for the afternoon, reopening around 4 p.m.. This is the still honored custom of the siesta that is found throughout Central and South America and also in portions of the Mediterranean. We like it, and as we wander through our retired 60’s are adopting it more and more often.

At 4 p.m. we struck out to explore the neighborhood. We are a few short blocks from the historical quarter where there are government buildings, the President’s residence, the Cathedral, Cathedral Square, and a very long pedestrian shopping district with wall-to-wall people and vendors.

There is a significant police presence, perhaps because of the recent violence. The “Carabineros de Chile” as they are called, look no nonsense and very professional. Nevertheless, there are few of “them” when compared to crowds of “the others”. Street theft is a problem in this city as in so many others.

We walked in search of food, drink, and an opportunity to process the flood of new experiences. A little restaurant provided all of those things to us in a street side setting. Again, ordering was a bit of a crapshoot as there was no English on the menu or our waitresses lips. Cerveze (beer) was easy, pizza, salad, and fries, were a little more challenging. They tasted great and the prices were a little better than what we would pay back home.

Continuing our walk our curiosity drew us into what appeared to be a vacant lot now occupied by a number of colorful food trucks displaying beverages, Arabic food, Pizza, BBQ and the like. Just as we were exchanging thoughts of regret at not seeing this venue earlier, we were approached by Francisco.

In good English he welcomed us and explained that this was his operation. “Food Park Tepeyak”, Rescatando Espacios Para Ti (Rescuing Spaces for You).He had secured and decorated the vacant lot for this use, installing electrical and water connections for the vendors, tables and toilets for the customers. He welcomed us to his creation. We explained that we had just eaten but promised to return. He is open from noon to 11 p.m. every day. We will be back.

In our wandering we did not see another American tourist. I know that they must be out there somewhere, but then we are not searching. We have two days to take in this new experience and perhaps learn more of the rules to this unfamiliar game.

PS. December 11th: We returned to Food Park Tepeyak today, found ourselves surrounded by a couple of large protests, and were wowed by the Precolombino Museo. Details next post… Stay tuned.