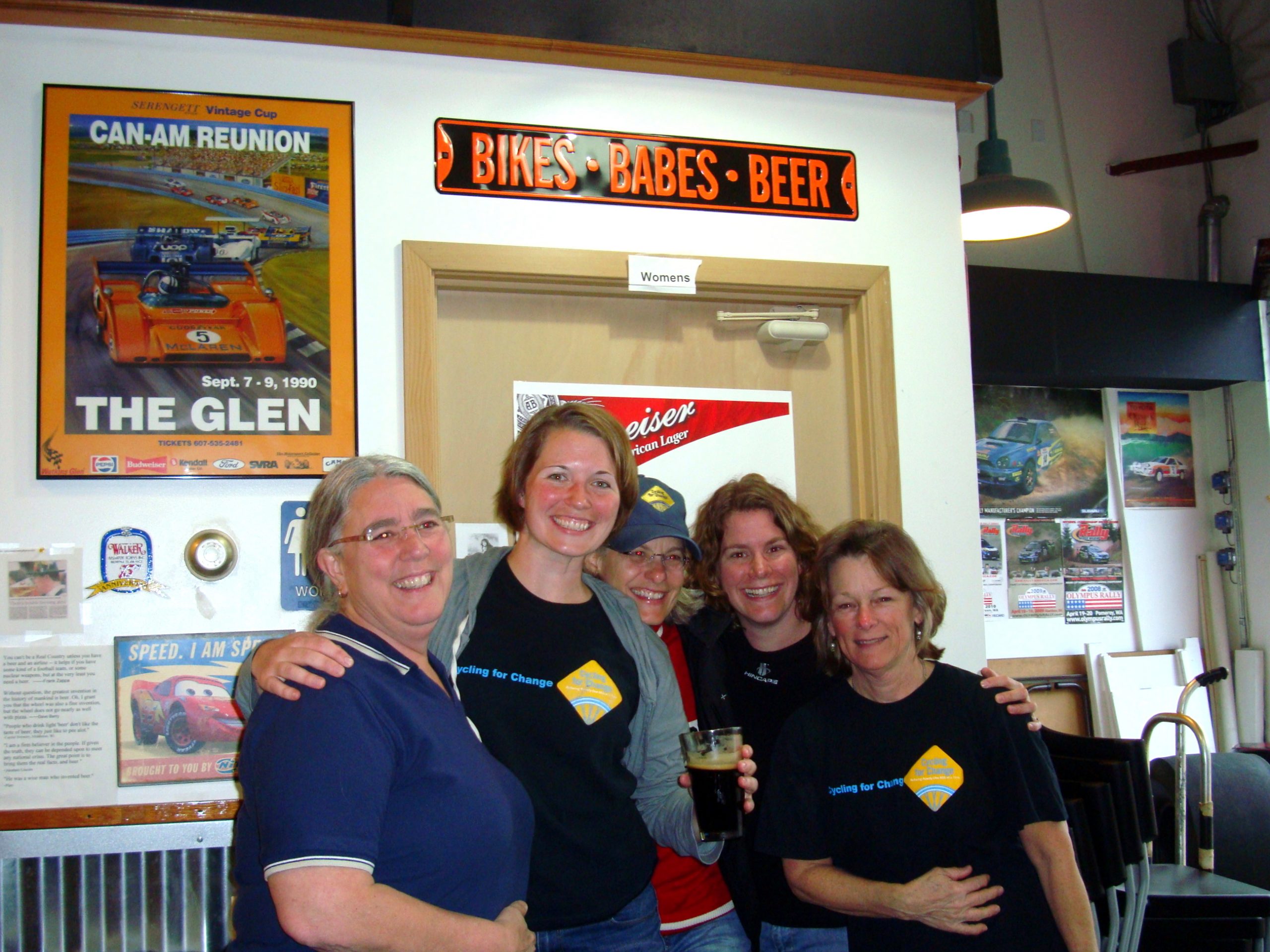 There is an annual Summer bicycle event, “The STP”, Seattle to Portland. It covers over 200 miles and limits participation to the first 8,000 who sign up. Some riders cover the distance in a single day, others in two.

We covered the distance, departing Seattle on June 2nd and arriving 3 riding days later in Portland on June 4th. Unlike the STP riders we had duties other than bicycling.

Lunch on the June 2nd included a tour of the Tahoma Family Center, housed in the former St. Leo’s High School. The facility provides meals and services to thousands of unfortunates each week.

More about this Catholic Community Services Center appears at the end of this post.

…and then we were back on the road to complete a 66 mile ride for the day.

Our housing was furnished in the dormitories of Evergreen State College, home of “Speedy the Geoduck”, a species of clam that in real life is the largest in the world. Some say it resembles a… well, I will let you draw your own conclusions.

In the world of strange college mascots, it’s a toss-up between “Speedy” and Mississippi’s Delta State U mascot (where we also stayed) “The Fighting Okra”.

The Evergreen State dorms were delightful. With the exception of drying wet gear and sharing our room with a bicycle it brought back memories of an earlier time in my life.

A short walk into town brought us to a favorite college hangout for dinner and carb-loaded beverages… important for sustaining thirsty cyclists.

June 3rd, 65 miles to Castle Rock included some pleasant miles of “rails to trails” riding, enhanced by music from a mini-speaker attached to my bike.

We concluding the day with dinner hosted by the Knights of Columbus chapter in Kelso Washington. Our spirits were high. We had not yet begun to hate pasta.

My experience the prior day at the Tahoma Family Center still weighed heavily on my mind:

Many of us have heard this speech: “In the unlikely event that there is a loss of cabin pressure, a mask will fall from a compartment above you, and provide you with oxygen…”.

We take for granted that on a journey we will be provided with our basic necessities. Air, water, food, safety. Most of us never consider two other “necessities” that we also take for granted… hope and dignity.

Wednesday (June 2, 2010), the Cycling for Change Team was provided lunch at St. Leo’s Church soup kitchen in Seattle, Washington. St. Leo’s provides breakfast and lunch meals for between 800 and 1,100 people every day, 5 days a week. As one of the staff people explained, the numbers tend to go up at the end of the month when people find that they have run out of money.

Our visit was at the start of the month, but the lunchroom set in a large and old repurposed school appeared filled to capacity. As I walked through the door I experienced an emotional version of a “sudden loss of cabin pressure”. Before me was a post-apocalypse vision that we have all seen in science fiction movies. A crush of vacant eyed people, soiled, many wearing what amounted to tatters. We were to dine shoulder to shoulder with the people that Seattle had forgotten.

Before I took my place in the food line, I visited the men’s room to take care of another “necessity”. As I turned the corner I beheld that there were no doors on the line of stalls. The one that was available to serve my “needs” was mere feet from a line of men waiting to use the urinals. I was faced with the decision to either wait in discomfort and go elsewhere, or just sit down and “go” in discomfort. I considered that I was there to (briefly) experience what others live daily. Swallowing my pride I lowered my cycling shorts along with my expectations for privacy. In a matter of minutes a man took his place in front of me at the nearest urinal and without a moment’s hesitation struck up the most ordinary conversation with me about the weather. He was followed by another person who commented upon my bicycling attire and asked what I was doing. This continued,, one man after another, to the point that I felt that I was in the receiving line at a wedding.

Business done, and hands washed, I proceeded to the food line. I was handed a brightly colored compartmented tray, the kind that you would expect to see in a grade school. There was a bowl for the soup, but no plates. My meal consisted of a slice of lunchmeat between two pieces of white bread, a bowl of chili-like soup, and a single chocolate chip cookie. A soup kitchen that serves a thousand people a day from donations does well to make do with what it gets. The same applies to those who are served. There was coffee, hot and excellent by any standard.

I moved to one of the long cafeteria tables and found a vacant folding chair between two of the center’s customers. I ate and visited with my “companions”. I was beginning to feel a sense of accomplishment in embracing the experience when my eye was drawn to a man seated across and a few chairs to the left of me. I was wrenched back into the reality that for everyone at table but me this was not a diversion, not just “an experience”… this was reality, this was life. Again, there was a loss of “cabin pressure”.

The “oxygen” that was rarified in the room’s atmosphere was the loss of hope. Most of us have experienced a momentary loss of hope, but few who read this know what it means to be without hope, and without prospect of finding hope… true hopelessness. In the soup kitchen I could scan the tables and see a face here and there that bore the signs of a life yet with hope. A father with his young son, the boy looking up to dad with the kind of hero worship that any father lives for. A man and a woman looking deeply into each other’s eyes, sharing gap toothed smiles between words and bites of their meals. But the man who had caught my attention was not one of these. With him there was no sign of hope.

He visited with no one. He sat ramrod straight, eyes forward. His hair was as neatly combed as hair could be that had not seen shampoo for some time. His stained and worn clothing would not have been suitable for donation to a second-hand store but was arranged with care. From his weather worn complexion, he looked to be in his 50’s, but I suspect the ravages of a life without shelter had aged him prematurely. He might have been 40, or younger. He ate slowly, with deliberation… with dignity. Everything about him screamed his dignity. He wore dignity like it was armor. The man grew in my sight and became larger than life. Whatever the cause of his condition, whatever the story behind a life rendered hopeless, by example he taught that dignity may be given, dignity may be cast aside, but it is never taken from one who chooses to keep it. For some, dignity dies last.

Next: Portland Oregon and the Columbia River