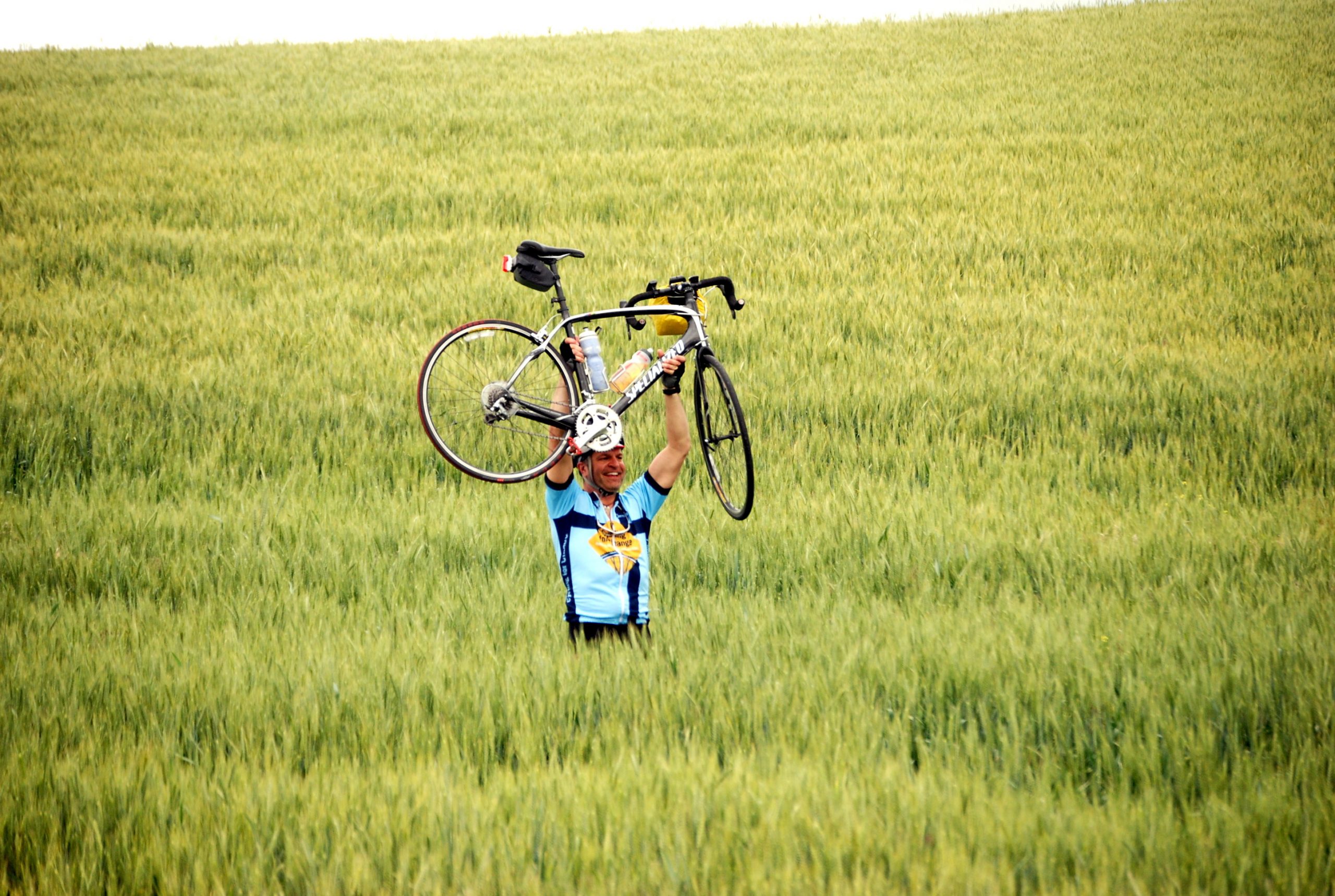 We had the road to ourselves and made good use of the bicycling solitude.

Our ride had begun at sea level. In Colorado we would achieve our highest elevations at over 10,000  feet. Our day-to-day acclimation to the increasing altitude was such that over the course of weeks we hardly noticed the air was becoming thinner.

Our transit across Idaho, measured from Walla Walla, Washington on June 10th to Missoula, Montana on June 16th covered 335 miles.

I kept daily track of my bicycle statistics on a bicycle specific Garmin GPS. In addition to speed, distance, and time in the saddle, it tracked my heart rate, maximum and average speeds, pedal cadence, calories burned and of course provided turn-by-turn directions.

The picture above is of one of the information screens on the Garmin at the end of the 64 mile ride to from Walla Walla to Pomeroy.

The motel in Pomeroy was “interesting”. The good thing about “interesting” is that it gives you something to laugh about 10 year later. The bad thing is that we stayed there. We made the best of it.

Also staying the night at the hotel were Lynne and Judy, 70’ish retired nurses from Canada.

They were also crossing the United States by bike. However, they were staying north and heading to New York while we were traveling a diagonal to Key West. Lynne and Judy were kind of a “Thelma and Louise” couple. They had business cards printed, “Lynne and Judy, Retired Nurses Behind Bars”. Their bikes were loaded to capacity and the ladies were getting up in years. I asked how they were handling the hills, “We’ve never met a hill that we couldn’t push our bikes up” was the impish reply.

We entered Idaho at Lewiston where we spent two nights in the dorms at Lewis and Clark State College.

Matt co-celebrated Mass at Our Lady of Lourdes parish in Lewiston. The parish pastor, Father Les, had begun his ministry years earlier as an Anglican cleric.

I have attended Anglican Mass and one is hard pressed to distinguish the service from Roman Catholic. I have to wonder if there is a secret committee that keeps the two traditions aligned in lockstep. Anglican ministers are admitted to the Catholic priesthood through a sort of reciprocity, even if the cleric is married. Thus, Les who was married at the time of his conversion, had the unusual distinction of being a married Catholic Priest. Sadly, he was later widowed.

Most of us were either retired or we had been able to put our school/work lives on hold. There were exceptions: Lissa and Christine each burned some midnight oil by working remotely on the road.

Doctor Tom Whittaker had responsibilities that required his presence at the University of Kansas Medical Center. He flew back to Kansas City before we reached the Columbia River and rejoined us on June 13th when we arrived in Cottonwood, Idaho.

At Cottonwood we were guests of the Benedictine Sisters at the Monastery of St. Gertrude.

This remarkable Convent was founded in 1882 by three immigrant nuns from Switzerland. The 10 acre site became the motherhouse of the community in 1909 and the current edifice was completed in 1924. The complex includes a basilica chapel and convent, each with 2 foot thick brick and stone walls. Part of the construction occurred during the First World War, leaving the nuns to quarry and lay the stones and bricks themselves.

After a tour of the convent Matt gave a well-received presentation to the nuns, most of whom were well up in years.

At the end of the session one nun who appeared well into her 80’s approached us and asked, “Why do milk stools only have 3 legs?”… Without waiting for a reply she chortled, “Because the cow has the udder!” We couldn’t resist laughing outright even though the joke was a real groaner. She was so proud of herself in the telling and totally charmed us.

We bid farewell to the Sisters the morning of June 14th and were off to Lowell Idaho where we stayed at the Three Rivers Resort. Classic knotty pine cabins, a great open air café, and wonder of wonders a swimming pool!

We nearly doubled the population of Lowell, and the line of our bicycles at breakfast must have been an eye-opener for the locals.

From Lowell we followed the Lochsa River, enjoying lunch at roadside, with the scenic Lochsa Lodge our destination for the night.

We arrived in Missoula, Montana on the 16th.  More about that in the next post.