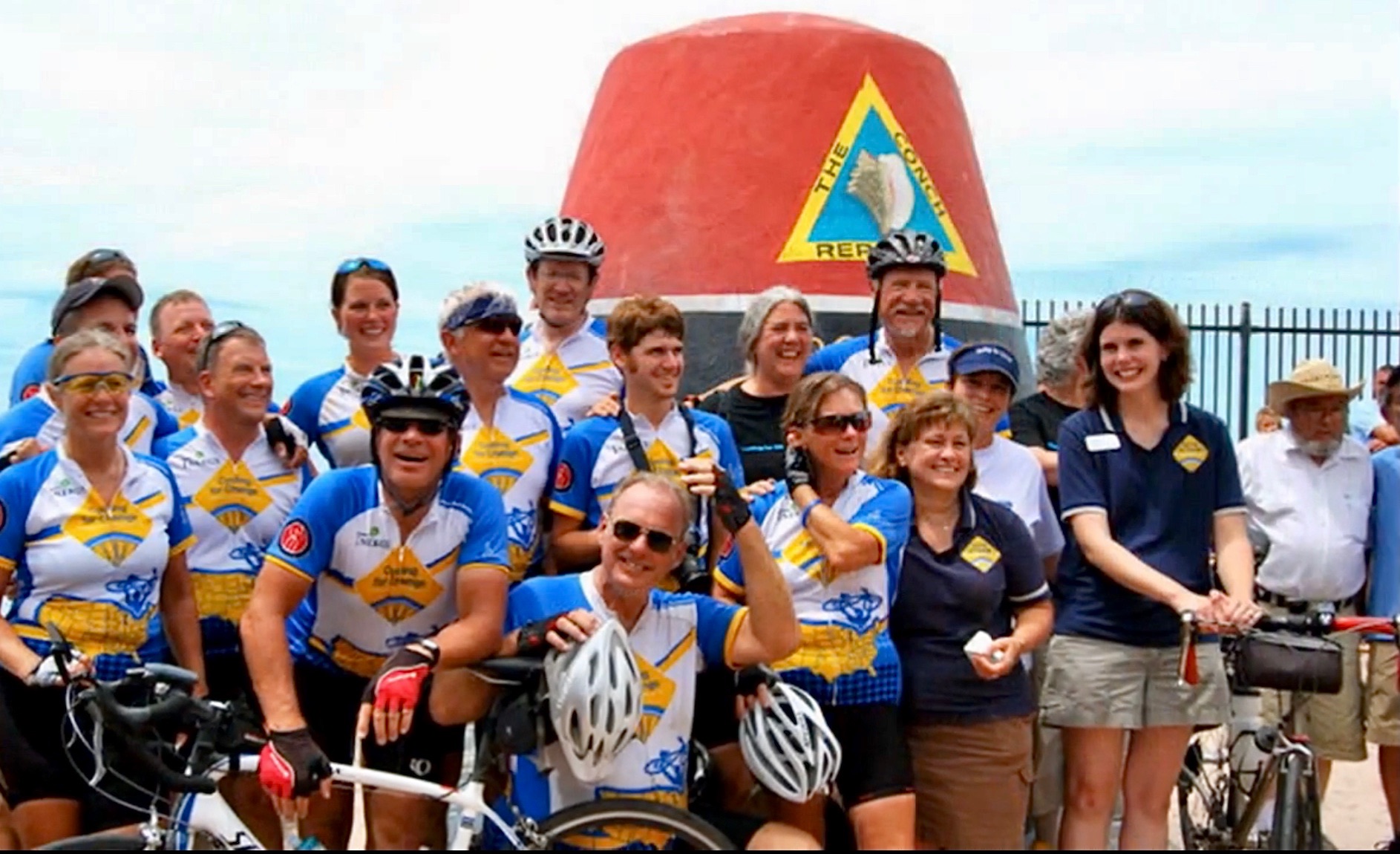 Key West, Florida lay 160 miles south and west at the end of a string of island pearls known as the Florida Keys. We would overnight in Key Largo and on Marathon Island, before riding into Key West, our final destination, on September 4th.

Traveling the length of the Keys was extraordinary and at times even magical. We shared the road with motor vehicles, but we had long grown accustom to the risks. If anything, Highway 1, the thoroughfare that has connected the Keys since 1935, was quite bicycle friendly.

However, there were exceptions.

The ride was at times leisurely, allowing us to stop roadside for pictures and to just take in the sights.

In Key Largo Christine and I, in the company of riders Tom and Lissa Whittaker, sought out a well regarded local restaurant. “Tasters” was an exceptional find both for its cozy and intimate island atmosphere and the excellent cuisine. We were treated like valued local patrons by the owner/chef, Thomas Smith. We enjoyed his personal attention and also delightful conversation with another diner, Christi Allen Franchini, owner of the local Pilates studio.

We returned the following morning with rider John Mocella to pick up a souvenir t-shirt and this time met Thomas’ young son.

At a nearby dock we found the original “African Queen”, the famed steam vessel from the 1951 movie of the same name that stared Humphry Bogart and Katherine Hepburn.

Now in “retirement”, this 35 foot steam powered vessel, originally launched the UK in 1912 as the “Livingston”, plied the waters of the Ruki River in the Congo for over 50 years. She was shipped to the United States in the 1970’s, refurbished, and was added to the US Register of Historic Places in 1992.

She has continued on in Key Largo as a tourist boat, undergoing her most recent restoration in 2012.

Our evening in Marathon was equally pleasant with drinks and some dockside contemplation.

As is to be expected, the sunsets in the Keys were stunning.

Our ride into Key West from Marathon was rain-delayed by a strong early morning thunderstorm with accompanying rapid-fire air to ground lightning. The storm gave us a pause for breakfast and fortunately passed quickly. Back on our bikes we covered the last 50 miles, entering Key West shortly after noon.

We were greeted by a contingent of family and friends.

There was an overflowing of emotions and Champaign.

We posed for pictures.

We embraced, and we gave thanks that the 16 of us had safely made it across the United States without a serious accident or injury.

The evening capped off with another spectacular sunset that lacked only “The End”  followed by the list of cast and credits scrolling across the sky.

I know what we did, but the answer to what we accomplished is more elusive.

We bicycled over 5000 miles across the United States.

We carried the message of the problem of poverty in America.

We attended rallies, and we visited facilities that attend to the needs of the underprivileged. We lent a hand now and then along the way.

Certainly, we raised substantial funds for poverty related programs in Kansas City and in other communities that hosted us. While we may have touched some lives in a way that brought change, perhaps most important was the change that occurred within each of us.

For 100 days we were dedicated bicyclists. For 100 days we were a tight-knit family. We became disciples in a cause that did not end on the 100th day. It is not hyperbole to say that this was a life-changing experience. When I am engaged in conversation with a new acquaintance it is natural that the topic of “what did/do you do” comes up. After all, that is the fast track question to learning about one another. I am a husband of 43+ years, a father, a grandfather, a retired lawyer of 40+ years… and I bicycled over 5,000 miles across the United States as part of a commitment to the mission of Catholic Charities. It is telling that I mention those 100 days as a member of C4C with the same level of pride and accomplishment as other aspects of my life that are measured in decades. I suspect that the other 15 members of C4C are equally gratified with the part that they played.

I am proud to have been part of Cycling for Change. I am honored to call the other members my lifelong friends. I am especially grateful to Father Matt Ruhl, S.J. for the passion that he carries for the plight of the poor and underprivileged. Matt not only turns words into deeds, but he moves others to act, we of Cycling for Change among them.

Now roll the cast and credits:

… and finally: Peace Everyone. Pete Schloss