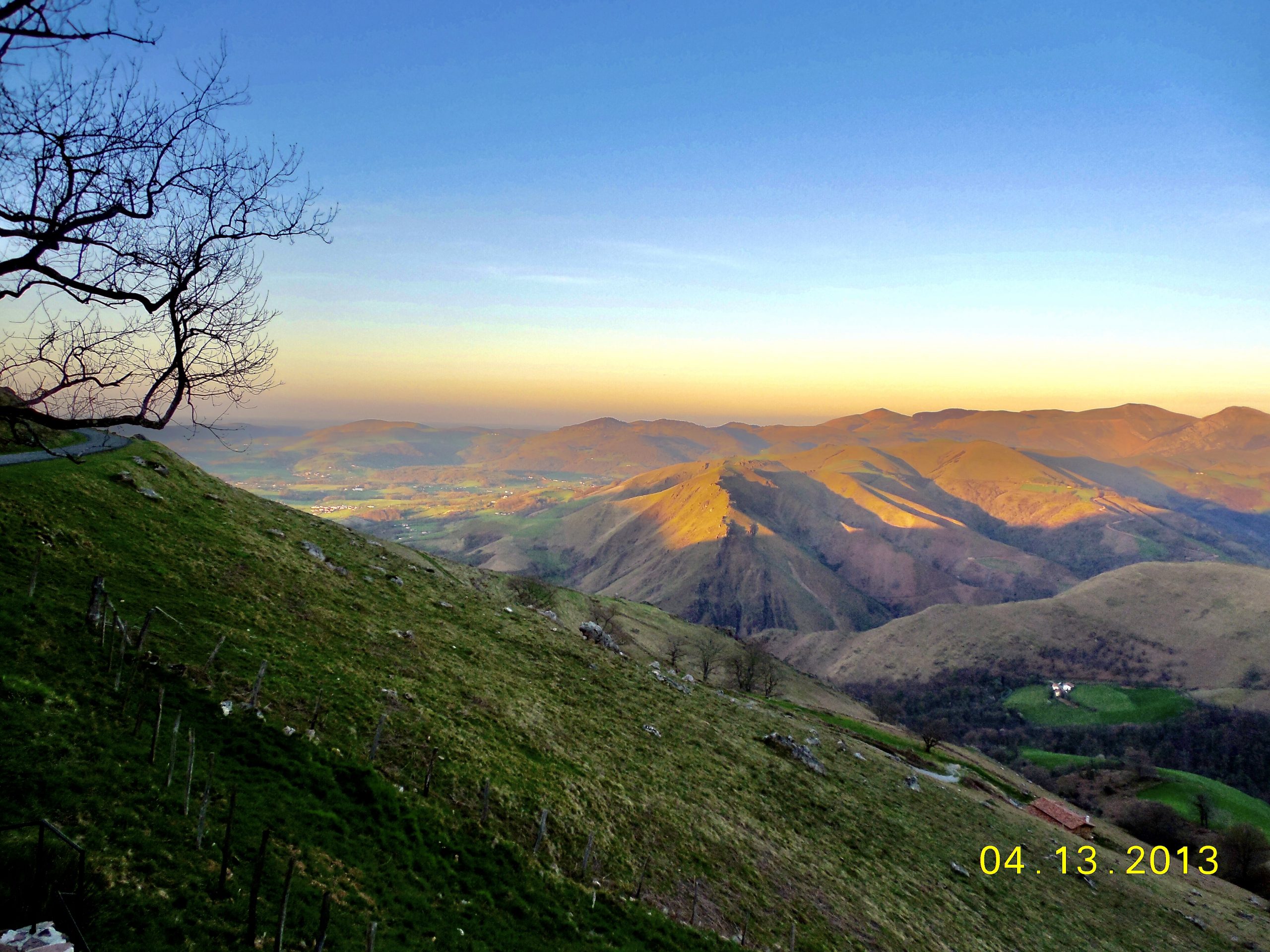 “The Way”, presented an idealized Hollywood portrait of life on the Camino. There were a few dramatic scenes, but for the most parts it was a pleasant countryside stroll. We thought that we were prepared for the reality. Having read the Brierley Guide’s cautions we knew that the transit over the mountains could be difficult and even dangerous.

We had decided not to hazard the entire 25km passage to Roncesvalles, Spain in one day. Instead, the refuge at Orisson, a private albergue, was situated half the way to the pass and would split the climb over two days. This seemed prudent given Christine’s untested tolerance for walking laden with her pack. A recent snowstorm had closed the Route Napoleon the prior week. It had reopened that morning, so given the warming conditions an extra day seemed like a good idea.

We were up at dawn and greeted by Marie Josee with the breakfast table set.

She encouraged us to take some fruit and cheese with us “for the road” and saw us to the door for a warm sendoff.

Returning to the start of the Route Napoleon the sky was clear, the rising sun had burned off the morning dew, and the temperature was warming. It promised to be an excellent day for a hike.

The Route Napoleon is one of two paths to the Monastery at Roncesvalles (“Valley of Thorns”). It is the more difficult of the two but presents spectacular views as one ascends to the pass.

However, it is prone to rapid changes of weather and pop-up storms. It can be dangerous for the unprepared. It is also deemed the most strenuous segment of the entire Camino Frances.

The alternate route, Via Valcarlos, is preferred in the winter months and whenever there is a threat of deteriorating weather. It mostly follows roads where the main challenges for pilgrims are traffic and noise. There was never a question for us, we would take the Route Napoleon if at all possible.

The Route Napoleon was Napoleon Bonaparte’s favored track for moving his troops into and out of Spain during the Peninsular Wars of 1808-1814.

Adrenaline and high spirits carried us up and through the first few kilometers. There is a limit to the relief that excitement can give to tiring legs and winded lungs. I was doing well and felt in my element. Christine began struggling.

A few kilometers later and I was growing concerned for her physical and emotional state. Given what we were experiencing, any attempt to have covered the entire 25km to Roncesvalles was unthinkable.

We took our time, made frequent stops, and took in the spectacular views.

I encouraged Christine while she put a brave face on her pain. It was a good thing that the Camino had been her idea since with “ownership” comes responsibility.

Hours into the climb we arrived at the Orisson Refuge.

What a pleasant surprise! The albergue was crawling with pilgrims of every age and stripe. All were just beginning their journeys. Backpacks lay scattered everywhere, and one could overhear conversations in a multitude of languages. Best of all, there was an outdoor deck with an amazing view of the mountain range, and a waitress bringing beers to the tables. Our spirits again soared.

We registered and were given bunks in one of the three shared cabins.

With about 30 Peregrinos assigned beds the refuge was at its capacity. Dinner was an excellent communal affair that included wine and good company.

After we had eaten, our host rose and spoke to us in French, Spanish, and English. He asked for volunteers who could translate for any unable to speak those languages.

He insisted that each of us stand to introduce ourselves to the group. We were to give our names, country of origin, and offer the reason that brought us to walk the Camino. It was marvelous!

The room erupted in laughter when I pointed to Christine and with a deadpan expression said, “I’m here because this was her idea”.

One young man stood and while looking at his companion announced that he was on the Camino to ask for her hand in marriage. First there was stunned silence, then loud applause and even a few tears, more than a few from his bride to be.

As we began making our way out of the dining room Christine said that she would catch up to me in a few minutes. She wanted to speak to the hostess. She had a serious expression that concerned me. Anxiety building, I waited outside for 15 minutes that felt more like 2 hours.

Christine returned and said, “Well, that is taken care of. I’m not going to continue over the pass.” Our Camino that had barely begun was over… or so I thought. She caught my expression and correctly read my thoughts. “No, we aren’t done. You are going to continue in the morning, and I will meet you at Roncesvalles.” A delivery service was scheduled to transport supplies between Orrison, St. Jean, and Roncesvalles the next morning. The hostess called the service and arranged for Chris to ride along. Our Camino would extend to 35 walking days. this would be the first of many days that we did not walk together. There were 11 nights we would spend apart. In our 35 day journey across Spain we found that we often traveled different paths and embraced different experiences.

I thought that I had planned for the foreseeable. I was wrong. Life presents each of us with unique paths. So it is on the Camino.

PS. Before departing Kansas City, Christine bought a colorful piece of lightweight fabric. It measured roughly 5 feet by 6 feet was attractive, fast drying, and packed very small. It’s general utility was marvelous. In this image she wears it as a modest wrap after having taken a shower. Her “sarong” (as she would call it) became the envy of many women on the Camino.