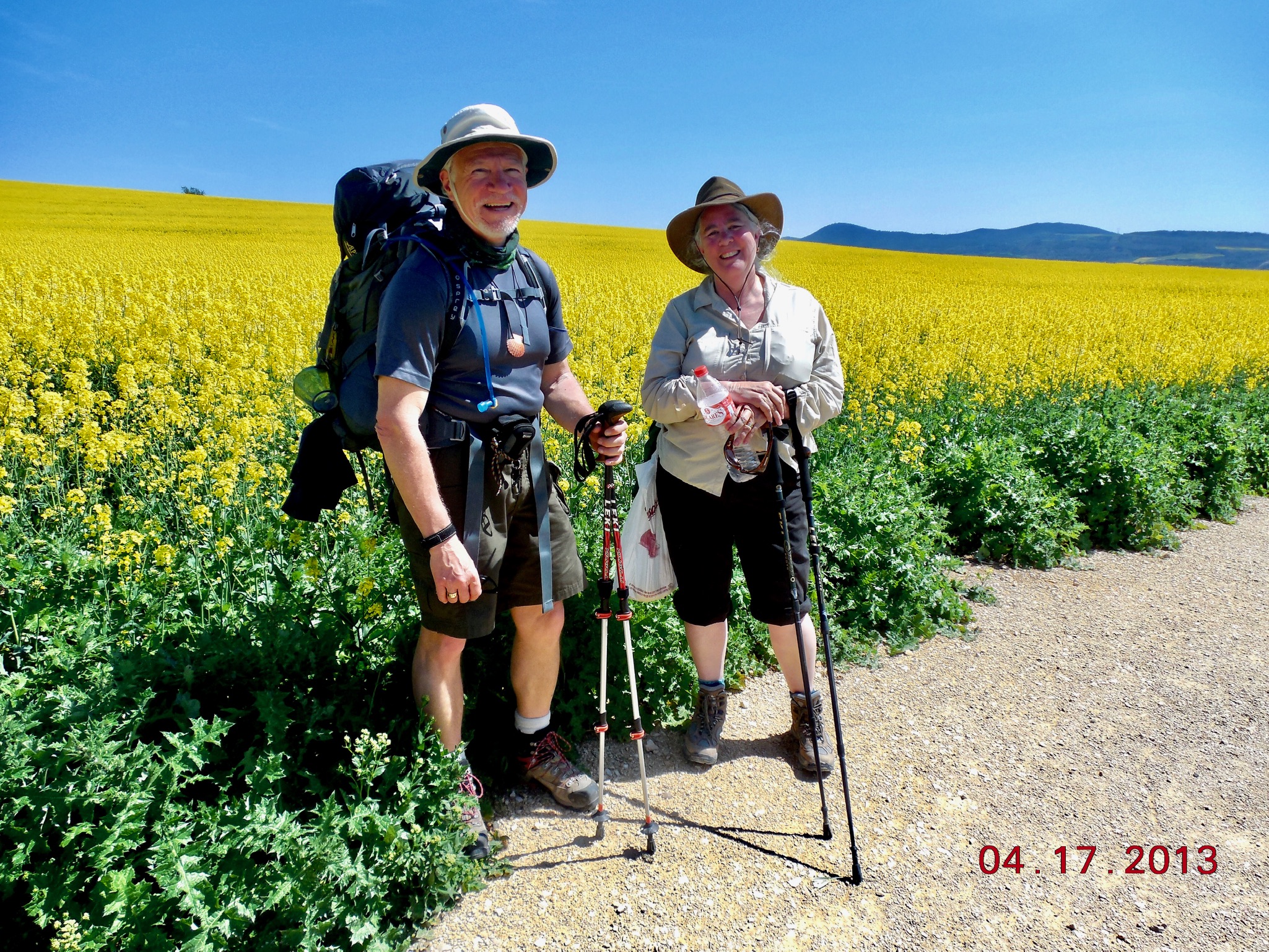 We arose with the break of dawn. Most albergues allow only a single night stay and further that pilgrims be out the door before 8:30 a.m.. This is to allow the staff, often volunteers, some rest and an opportunity to prepare for the coming night’s lodgers.

I pulled on my pack, but the previous evening Christine discovered a service that was to benefit her often over the hundreds of kilometers before us. For from 5 to 7 Euros a pilgrim could tag their pack and leave it at the albergue for pickup by a courier who would then deliver it to the destination designated by the pilgrim. Get the envelope from staff, write the destination on it, seal in the coin, and tape or wire to pack. Brilliant! Thus unburdened Christine was better able to travel the distances with me.

Most of Pamplona remained asleep, giving us the opportunity to gaze upon the old city absent the usual throng of tourists. The areas of the Cathedral and Town Hall were just beginning to see first light.

Pamplona, founded in the 1st Century BC by Roman General Pompaelo, is a large city with a population of over 200,000. The walk to the outskirts was a matter of a couple of kilometers that wandered through picturesque sections including a delightful park that was in full Spring flower.

One might be concerned with becoming lost in the maze of crossing city streets or in the unfamiliar countryside, however the entire course of the Camino’s French Route is well marked. In places this takes the form of metal icons embedded in the pavement, tiles mounted on the sides of buildings, or pylons emblazoned with the stylized scallop shell.

Even though well marked, a guidebook is very helpful. We relied upon our 2012 copy of John Brierley’s popular guide. The first such guide was the Codex Calixtinus written in 5 volumes by the French Priest Aymeric Picaud in 1138. An original copy is held it the treasury of the Santiago Cathedral. Of course, one can also purchase a modern printing on Amazon!

The April 17th hike from Pamplona to Puenta La Reina spanned 24km with a challenging climb to the 2,590 foot summit of Alto del Perdon (“The Hill of Forgiveness”).

As we began our ascent the city limits of Pamplona were visible under the city haze behind us, along with the ruins of the Fuente Reniega (“Fountain of Renouncement”).

The fountain dating to the Middle Ages is reputed to be the place where a pilgrim dying of thirst was tempted by the Devil to renounce God upon the promise of water as a reward. The pilgrim instead rejected Satan whereupon the tempter vanished. St. James then appeared before the pilgrim and revealed the spring, allowing the pilgrim to quench his thirst. Today the spring is dry. A metaphor of our times?

We again encountered Regina from South Korea. She had shared our cabin at Orisson Refuge on the first day.

Unfortunately, she suffered from a bronchial infection that turned into a small epidemic among pilgrims during our early days on the Camino. We were not immune.

Another contrast to our eyes in the distance was the array of modern wind generators atop the Alto del Perdon. They loomed over a monument to past and present pilgrims on The Way.

Before us lay a broad expanse of countryside. Puenta La Reina was in the far distance beyond green estates, wine vineyards in early spring bud, and vast fields of yellow flowered rapeseed. Rapeseed is cultivated as the third leading source of vegetable oil, animal feed, and bio diesel fuel after soybeans and palm oil.

Down we descended the winding and potentially treacherous path to the peaceful plains below where in the 8th Century King Charlemagne’s army soundly defeated the Muslims in pitched battle.

It was unseasonably hot and dry that day with little shade. Fortunately the Camino provided frequent public rest stops, water fountains (yes, safe to drink), and the occasional snack shop where huge “bocadillos” (cold-cut sandwiches) and beverages could be had for a few euros. A can of San Miguel beer (1€) cost less and tasted better that a can of soda.

At the end of the day we were ready for a bit of pampering in Puenta La Reina which we found at the Albergue Jakue. The 40 bed albergue occupied the basement level of the popular 3 star Hotel Jakue which featured a sauna, library, a welcoming outdoor garden with Bar, and a full buffet breakfast. We were permitted use of the same amenities as the full-pay hotel guests, but at a fraction of the cost. Who needs privacy? By the way, Christine scored a massage with a delightful and most friendly masseuse.

The 18th dawned clear and crisp, the heat of the day lay hours off. Puenta La Reina, a pleasant village of 2,000 inhabitants, features an iconic Medieval bridge ordered built by Queen Muniadona (995-1066) as an aid to pilgrims seeking to cross the broad River Arga on their way to Santiago.

Our path wound 22km to the town of Estella (“Star”, pop. 15,000). En route we passed through three small villages, the most charming being Cirauqui (pop. 500), which provided a welcome stop for a brief rest and snack.

This stretch of the Camino included passage over a still used 2,000 year old Roman bridge and road. Rough, but memorable for the experience of following in the footsteps of long dead Imperial Legionaries.

Seated at the far end of another ancient bridge I encountered a seated pilgrim. He greeted me and we spoke for a few minutes. He had received a recent unfavorable cancer diagnosis. He was walking the Camino to seek God’s blessing and asking for prayers from fellow pilgrims. The kilometers that followed for me were spent in quiet thought for that gentleman.

We arrived in Estella before the albergues had opened. Typically pilgrims are not received until after 1 or 2 o’clock in the afternoon.  This allowed us time for a visit to the stunning 12th Century Church San Pedro and its adjoining cloister. It was here in Feudal times that the kings of Navarre were crowned and swore their oaths before the Church.

There was always time for sharing wine with a fellow pilgrim. On this occasion it was with our new-met Camino friend Deb Rouse from Australia.

Our journey would parallel hers in lockstep over the next few days. We have maintained contact with her to date. One of the gifts of the Camino.