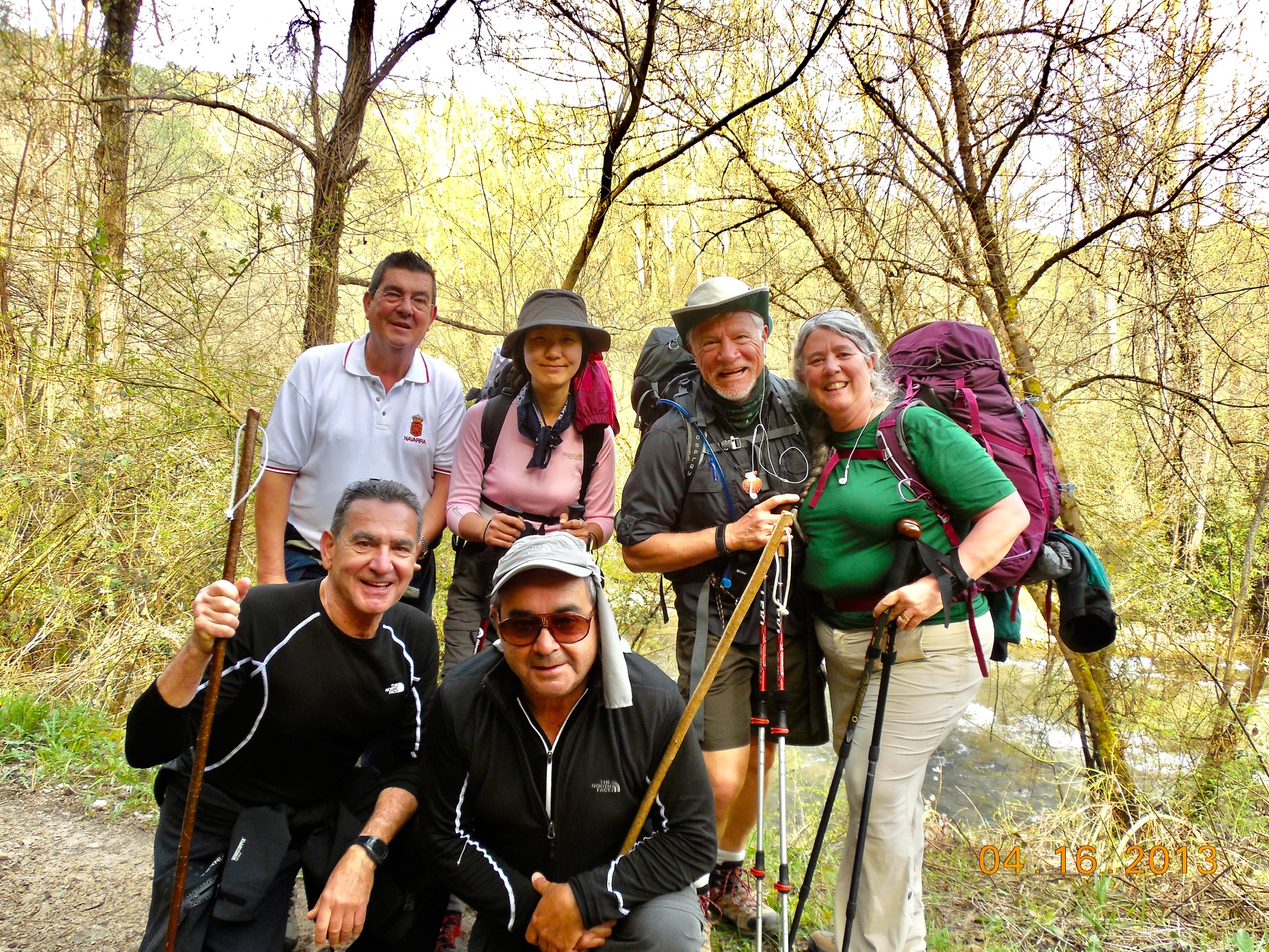 The day broke at Roncesvalles with a clear sky and these two pilgrims well rested. An American volunteer at the albergue greeted us warmly and shared a few minutes of conversation. She escorted us to the door and with a “Buen Camino!”, sent us on our way suffused with optimism for what lay ahead.

For reasons that still escape me this felt like the real start of our pilgrimage. Not a quarter mile down the road was an iconic road sign, “Santiago de Compostela, 790 km. We stood beneath the sign for a picture just as hundreds of thousands of modern day pilgrims had.

Later we learned that a week earlier a high school classmate of our children, Jed Brown in the company of his fiancé Sarah, shared that same spot during a snowstorm as they made their way to Santiago.

790 kilometers! It should have been intimidating, instead it was invigorating. 790 kilometers is over a million steps. I have heard it said that a woman forgets the pains that she endured in labor at the first sight of the new life that she brought into the world. Perhaps in a small way the sight of that sign put to rest the struggles that I had endured the prior day.

While we embraced hope and optimism, we did our best not to hold onto expectations. I had long ago learned an important life lesson that without expectations there can be no disappointments. So far, so good.

A short way down a track through a wooded path we encountered a carved stone cross. It was a modern reproduction of a 17th Century cross that was damaged by lightning.

“Bucket lists” are individual and personal. That cross was the first of many symbols that reminded me that we were pursuing something more significant than an 825 km hike. We journeyed in the footsteps of countless pilgrims who over the centuries had walked to seek God’s grace, or as penance for the forgiveness of sin, or as punishment for crimes they had committed. I still walked because it was there.

3km down the road we paused for coffee and a light breakfast in the quaint village of Burguete, a favorite of Ernest Hemingway.

Its small hotel is reputed to have a piano on which the author carved his name and the date, July 25, 1923. The small village square where we sat was a place where suspected witches were burned at the stake in the 1500’s.

5km further and we made one of the many river crossings those first two days, this one on stepping stones.

At times the path was irregular, and in wet weather could even be treacherous. We passed a spot where 11 years earlier a 64 year old pilgrim lost his life.

We shared the beauty of the day with each other and the scores of other pilgrims on the path. Scarcely a kilometer went by that we did not exchange the ubiquitous salutation, “Buen Camino!”, with another pilgrim.

It remains on the Camino a universal declaration of hello, goodbye, good luck, and safe journey, one’s native language notwithstanding. Christine soldiered on with pack on her back. At day’s end Roncesvalles was 22 km behind us and Pamplona 22 km ahead of us. I was tired, Christine was beat.

Saying anything of substance to another on the path did require a shared language. Fortunately, English was spoken by most pilgrims, at least as a second language. Friendships grew from nothing more than “Buen Camino”. We had little more in common with most than that we faced the same journey, challenges, fears, and hopes. In a few steps we shared our stories. In a few kilometers we shared our souls. By day’s end we were as familiar with each other as brothers and sisters. Among family members many “indispensable” social conventions of personal privacy are ignored. So it is on the Camino where many conventions are cast aside in favor of a less restrained sharing among our instant friends. We were each like separate threads with different languages, cultures, origins, and futures, woven together on that one day to briefly become a unique human tapestry.

Years later I overheard a person pass on an opportunity to join others in a friendly conversation, “I don’t have anything in common with those people.” That comment referred to work, politics, socioeconomics, community… things perceived as important to making connections with other people. What we frequently ignore is that we share a journey in life that includes many of the same hopes, dreams, fears, successes, and failures. A few kind words and we find that we have more in common with the “stranger” than we were willing to acknowledge.

Evening in Zubiri brought us a communal dinner, welcome companionship, and beds. Good medicine for the exhaustion that we both felt. Pamplona would be our destination 22 km distant the next day.

Over the course of the 44 kilometers that separated Roncesvalles from Pamplona we crossed many bridges, most dating to the Middle Ages, some to the time of the Romans. I found each bridge fascinating for the human labor invested in its creation, and the ingenuity that produced an ancient structure that still served its original purpose.

One bridge was once thought to cure any animal of rabies by walking it around the central arch three times.

A bridge that crossed the river Ulzama featured an albergue at one end. The bridge and albergue, formerly a pilgrim hospital, have stood and served the needs of those on pilgrimage for over 1,000 years.

The next day continued much as the day before. There were encounters with pilgrims, a delightful outdoor lunch, beer included, and more bridges.

With about 8 kilometers left to reach Pamplona, Christine was done. It is one thing to walk 22km in a day but entirely another thing to do it day after day, especially for one unaccustomed to it. She prudently decided to take a taxi those last kilometers and secure our night’s lodging at the 114 bed albergue built into the side naves of the former Jesuit Church of Jesus and Mary.

We arrived in Pamplona with enough afternoon left to take in some sights of the city of 200,000, famously known for its “Running of the Bulls”.

PS. Christine’s mantra was and is, “Listen to your body”. Walking into Pamplona, much to my later regret, I disregarded my body in favor of an opportunity to see how fast I could walk those last kilometers.

My unnecessary effort set off tendinitis in my left ankle that never fully resolved over the weeks that followed. My imprudence and failure to “listen to my body” would eventually gift me a permanent reminder of that temporary impulse, a 12” surgical scar. My left posterior tibial tendon fully ruptured 5 days after we returned to America. How and why the rupture waited for my return to the States is just one of many “Camino mysteries” that I am left to ponder.