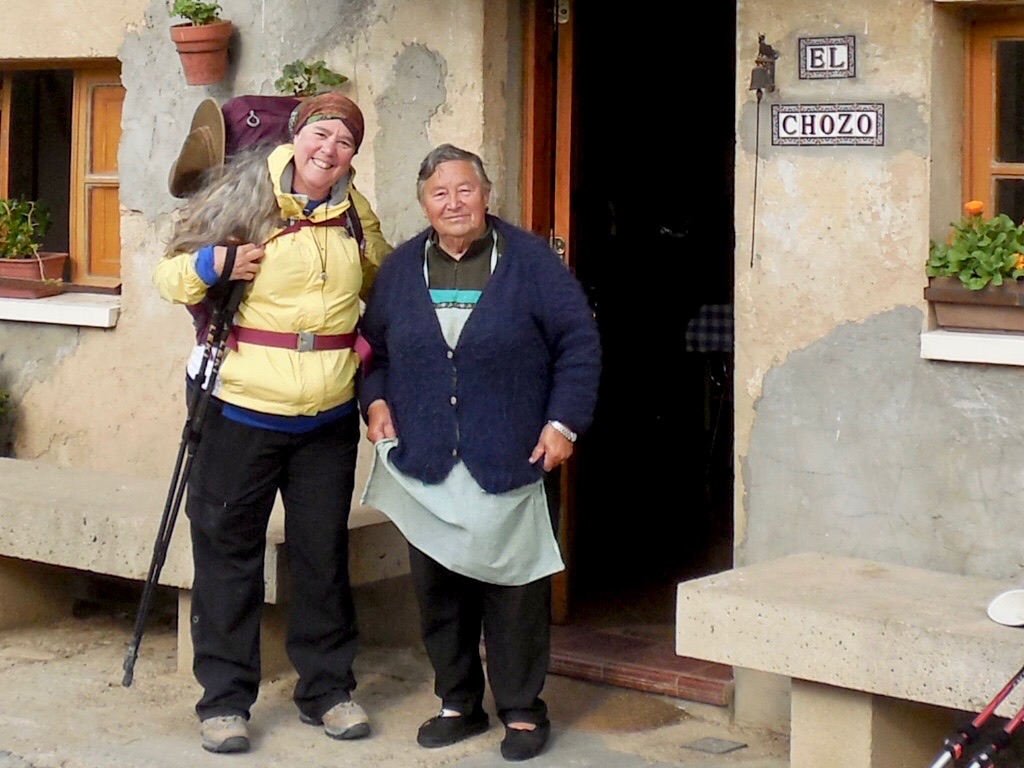 We were well on our way out of Viana before the first rays of sun lit the western side of the village. At 23km this would be a Christine’s longest day, particularly challenging since she was carrying her pack.

Not far down the trail we said goodbye to the mountainous region of Navarra and hello to the autonomous region of La Rioja. Sandwiched between Navarra and the plains of the Meseta (think western Kansas), this region has been famous for producing excellent wines for centuries.

Shortly after crossing the “border” into La Rioja we encountered an older woman standing in the doorway of her humble cottage. Short, sturdy, and weatherworn, with a smile that radiated a rich inner kindness, she motioned for us to enter.

This was Maria, daughter of the modern Camino’s famous Felisa (1910-2002) who for most of her adult life “stood guard”, just as Maria was continuing to do, greeting pilgrims entering La Rioja. Felisa, and now Maria, laid out a small plate with figs and offered water. Speaking virtually no English she accepted donations. However, this was no money making venture. The kindness Felisa and Maria showed was driven solely by love for those walking the Camino.

The “Felisa Stamp” in a Pilgrim’s credencial was highly sought by knowledgeable Peregrinos. In Spanish it reads, “Figs, Water, and Love.” All of these things freely offered by Felisa and Maria, nothing expected in return.

We entered Logrono, a modern city of 130,000, and capital of the La Rioja region.

Like most of Spain’s population centers, whether large or small, it featured a remarkable church that dates back hundreds of years. Catedral de Santa Maria de la Redonda was built on the foundation of an earlier 12th Century Romanesque Church. The current edifice dates to the 15th Century.

The altar and apse (surround) are stunning. The church also prides itself on being the owner of a small original painting by Michelangelo, “Christ on the Cross”. The small but priceless painting is kept secured in its own vault. When open for viewing a few coins are needed to illuminate the work.

Continuing out of Logrono on our way to Navarrete we passed the ruins of the 12th Century Monastery of San Juan de Acre which was founded to offer care to passing Peregrinos.

The huge Don Jacobo Winery looms large in the distance behind the ruins. Many years ago the Monastery’s ornate stone archway was relocated to the Municipal Cemetery situated just west of the city where it now serves as that facility’s entrance.

13km later we entered Navarrete (pop. 2,200). Though a fraction of the size of Logrono, Navarrete’s 16th Century Church of the Assumption is even more opulent than Logrono’s Cathedral.

One wonders at the wealth and time dedicated to this architectural competition that dates back hundreds of years.

Christine and I joined a number of our new Camino friends for drinks and pleasant conversation in the inviting central plaza. Over the course of the days and weeks to follow we developed deep personal connections with a number of these good people. Among them are (left to right) New Zealander Jennifer Dillner, Christine Lecher a German living in the Canary Islands,…

Gaby Pfauth of Germany, and Henk Kaspers of the Netherlands (far right).

We treasure their continuing friendships to this day.

It was a long day for Christine and me. She had outdone herself by hiking 23km with pack, and my feet were a painful mess.

For the first time we embraced the luxury of a real hotel room with private bath. We had earned it.

PS. Sadly, Maria passed away on March 15, 2021. The Camino has lost one of its Angels. In 2009 a film crew from Scotland produced this brief video about a day in this good woman’s life: Maria Tedora Medivalia Rodriguez (1933-2021).