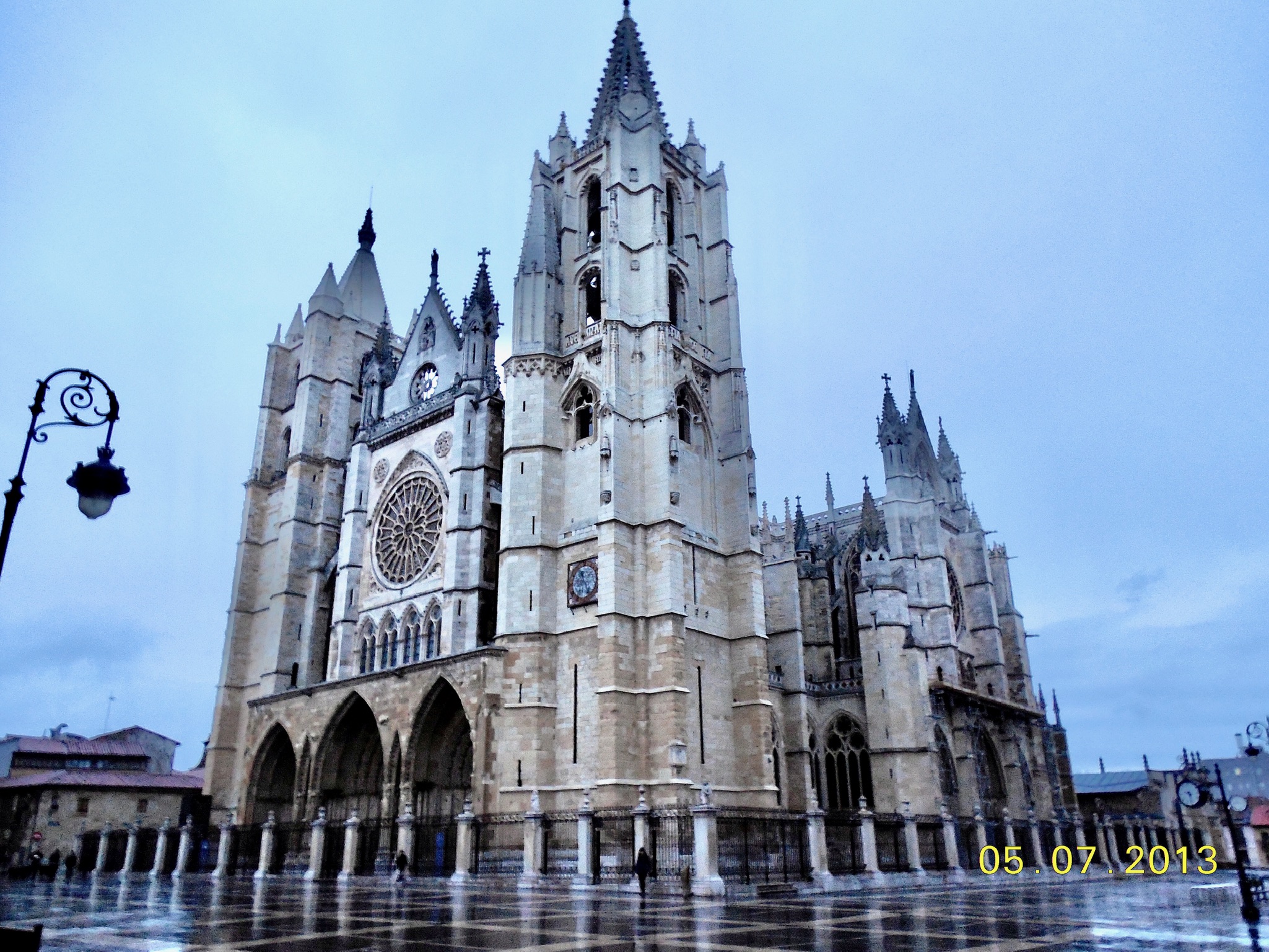 The afternoon bus ride from Mansilla de las Mulas to Leon avoided an 18km slog through the industrial suburbs of Leon (pop.130,000) and further reunited me with Christine. Those gifts were not without cost. I lost the company of two dear Camino friends, Bernard (France), and Henk (Netherlands). I would again see Christine (Canary Islands), and Gabi (Germany) in Leon.

The trip into the central city was just long enough to process my thoughts from who I had left to who awaited my arrival.

The bus deposited me at Plaza Santo Domingo in the heart of the city’s tony shopping district.

A walk of less than 1km in the direction of the Cathedral took me to the remarkable three star Hotel Paris, just off from the Cathedral square. Christine had registered here on the 5th for two nights. Once in her room she had emailed me the name and address of the hotel along with the cryptic, “Wait till you see the hotel I found!” With some trepidation, I imagined her “find” might be setting a new upper limit on our expenditures.

As it turned out, 50€ per night bought us a pleasant room, breakfast, and best of all unlimited access to the heated indoor swimming pool and spa! It was indeed a marvelous find mere steps from the Cathedral. But I am getting ahead of myself.

Just before I reached the hotel a male and female voice called out to me from a sidewalk café. My eye was immediately drawn to Christine as she ran from an outdoor table to embrace me. The male voice belonged to our Camino friend, Brent, the former Los Angeles District Attorney who made his home in retirement with his wife in Barcelona. He beamed a huge smile, and I knew that before my pack hit the ground he would be ordering a beer to put in my hand.

It was a wonderful reunion, tarnished only by a stabbing pain in my left ankle. The pain had been with me in varying intensity since shortly after Pamplona. However, this was by far the worst it had been. After I sat for a bit I became concerned that I would have difficulty walking to the hotel. Christine and Brent were able to communicate my distress to our waiter. He returned with a plastic bag of ice. With shoe off, ice on, and a dose of heavy duty acetaminophen (“paracetamol” in Spain) I was afforded welcome relief. A beer or two also did their part.

When the celebration of friendship concluded Christine and I adjourned to the hotel where I took advantage of the spa and a long hot shower. Dinner followed with a further exploration of the many regional flavors of Morcilla (blood sausage). So far the variety served in Leon was the “soupiest” once the knife and fork broke the casing. Christine couldn’t watch, let alone taste.

Before we turned in for the night we enjoyed a quiet stroll and the ghostly apparition of the Cathedral by moonlight. Tomorrow we would explore the wonders within.

“What the Burgos Cathedral was to stone, the Leon Cathedral is to light. Huge expanses of ancient stained glass are suspended in “heaven”. The artistic use of flying buttresses, vaults, and “stretched” columns of stone, conspire to join this world to the next. It is impossible to keep the eye from wandering (and wondering) skyward.”  -Written May 7, 2013 at Leon, Spain

Built between 1205 and 1301 the roots of Leon Cathedral’s foundations trace their origin to a huge 2nd Century Roman Bath whose footprint was larger than that of the Cathedral. Excavations beneath the Cathedral have exposed the 1,800 year old Roman stonework for study by historians and archaeologists.

Leon’s Cathedral is one of Spain’s three great “old world” religious edifices, the others being the Cathedral in Burgos, and the Cathedral in Santiago de Compostela. Like beads on a rosary, these great churches along with hundreds of smaller ones line the route of the Camino.

Leon’s Cathedral is of Gothic design, incorporating 125 windows and 57 oculi framing over 19,000 sq. ft. of well-preserved medieval stained glass into its structure. The exterior is spectacular.

The interior is majestic. Here is the most extensive and best preserved intact ancient stained glass collection in Europe, and possibly in the world.

The glass draws the eye skyward with its jaw-dropping height.

The Cathedral’s stained glass rosettes are not only a tribute to the art of the glaziers, but also to the stonemasons who constructed the intricate framing.

If the fine stonework and light airiness make the Cathedral appear fragile, it is because it is. Portions of the building suffered collapses in the 17th and 19th Centuries. Parts of the downed structure are displayed in the Cathedral courtyard.

The Cathedral’s Museum houses a collection of over 1,500 precious objects from antiquity, both religious and secular.

Beneath the main altar is a large silver reliquary urn that contains the earthly remains of Saint Froilan (832-905), Bishop and  Patron Saint of Leon.

The Cathedral abounds with not less than 14 striking side chapels, among them one housing the remains of Bishop Martin Rodriguez (d. 1242), who initiated the construction of the Cathedral.

The Chapel of Carmen contains the tomb of Bishop Rodrigo Alvarez (d.1232)

Another chapel contains the remains of King Ordono II (873-924), ruler of Galicia and Leon, who fought successful campaigns against the Moors.

There is the  Chapel of the White Virgin, the oldest chapel in the Cathedral,

and the Chapel of the Virgin of Hope. The polychrome on stone statue dates to the late 13th Century and portrays the Virgin as pregnant.

Leon, founded in 24 BC as a Roman military outposts, is certainly an international tourist  destination that has so much more to offer than the Cathedral. I regret that we could not take in more of the city. This is an omission that I hope someday to remedy on a future Camino.

The cool afternoon and clear skies drew fellow Peregrinos to gather at one of the sidewalk cafés.

It had been my habit on the Camino to wear two hats. While walking I sported a wide brimmed “Tilley Hat” favored by sailors and of Canadian origin. My symbol of post-hiking relaxation was an exchange of the “Tilley” for a proper Basque Beret that I had purchased in St. Jean Pied de Port. So popular was the look that a small group of pilgrim men impulsively walked to a nearby store and purchased berets for themselves. I am seen here with Brent and his USA Camino companion, Mickey, each wearing their new acquisitions.

Other familiar pilgrim faces that day included the Germans, Christine and Gabi (sadly, without Henk),

and the delightful Irish couple, Tony and Geraldine Linehan.

It was a very good day and I expected nothing less from the one to follow!

“Tomorrow I plan to bus out of the central city and 12km to the end of the urban/industrial sprawl. I will then continue on foot from Hospital de Orbigo, site of a medieval pilgrim hospital. It is also the site of an ancient bridge, portions of which date to Roman times. The bridge is 670 feet long and consists of 20 arches. My goal is to meet Christine in Astorga.”  -Written May 7, 2013 at Leon, Spain

Question: What could possibly go wrong?