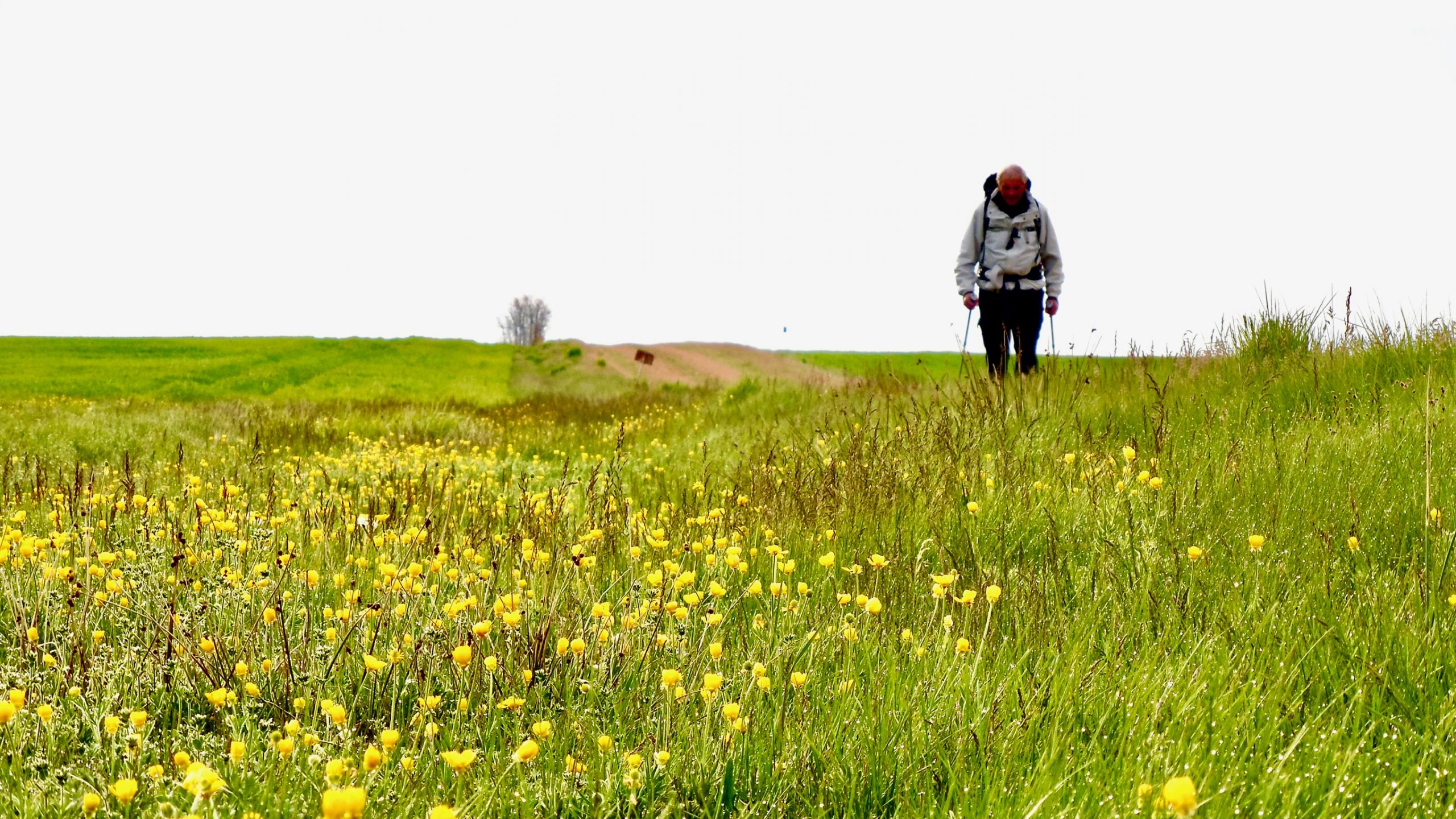 The Camino teems with pilgrims who by the above non-ecclesiastical definition are “saints”. As I came to better know one such Peregrino, his claim to “sainthood” was exceptional. I am confident that Dr. Bernard De Geeter would deny this mantle of “sainthood”. That would be just another proof of his entitlement to the accolade.

I was formally introduced to Bernard by Maggie on May 2nd in Carrion de los Condes. I recall first seeing him on April 25th in Belorado where he joined a group of us at a café. He appears that day within these posts as a “face on the Camino”.

Bernard was amiable, well dressed for a Peregrino, and appeared more fit than the average man approaching 70 years of age. He was quiet, but not unsocial or withdrawn. I really took notice of him when in the course of being introduced I learned that his Camino had begun on February 13, 2013, in snow covered Strasbourg, France, over 2,300km from Santiago. At the time we met he had already walked nearly 3 months and covered 1,900km. In my mind this did not qualify him for “sainthood”, but it was a pretty good start.

On the evening of May 4th Christine and I decided that the following morning she would leave by bus and skip ahead to Leon. I would resume walking solo, overnighting in Calzadilla de los Hermanillos on the 5th, then catch up to  her in Leon on the 6th.

Setting off at dawn it was my good fortune to run into Bernard about 1km out of Sahagun at the Puente Canto bridge. Sunrise provided excellent lighting for pictures. The bridge crossed the River Cea and was originally constructed by the Romans. It was given to later restorations in the 11th and 16th Centuries.

Shortly after meeting we encountered our mutual friend, Maggie. The three of us seemed to hold to similar paces, so  we walked in loose company on to our next destination.

Our goal for the day was the tiny village of  Calzadilla de los Hermanillos, (pop. 140) 14km distant.

No doubt we would have walked further except that the next village with any accommodations was another 25km beyond Calzadilla. Over the course of the next two days we would be walking one of the most open and rural regions of Spain’s Meseta.

Bernard and I got along well. He spoke English fluently and shared my willingness to exchange our “stories”. He explained that he was a pediatric cardiac surgeon. Digging deeper with my questions (and later with Google) I learned that he was internationally known for his pioneering work in the field that included the development of surgical procedures for children still in the womb. Another point in favor of “sainthood”.

As pilgrims do, we shared our reasons for walking the Camino. I was still “seeking adventure and adding to my bucket list”. I became embarrassed as Bernard revealed the following:

Bernard and a team of physicians spent 3-4 months each year traveling to various third world countries, volunteering their skills and providing free medical care to the poor in those nations. In Bernard’s case he had conducted thousands of lifesaving operations on children. (Yep, sainthood.)

What came next stunned me.  Bernard explained that he walked the Camino seeking the intercession of St. James, for relief from an emotional burden that he carried. Over the years thousands of poverty stricken parents walked hundreds of kilometers with their children seeking Bernard’s aid. Among them were those to whom he had to say, “I am sorry, but your child’s condition is beyond my ability to help.” With those parents he shares tears.

Then there were the other parents whose children he could help. “Peter, I feel so helpless that what I do for them does not change the poverty, hunger, and danger that they return to. I remember the faces of every mother, father, and child, those I cannot help and those that I can, but helpless to change the life that they are returning to.”

The pain in Bernard’s voice was palpable and drew from me both silence and tears. Above us were wisps of clouds that seemed to take the form of angels. I found that I walked with one.

We arrived in Calzadilla de los Hermanillos shortly after noon.

The town provided two options for the night, a humble 16 bed municipal Albergue, and a delightful private one, the 20 bed Via Trajana where private rooms were available.

Bernard and I elected to share one that featured twin beds and a private bath.

Via Trajana was also  known for its intimate dining and excellent wine cellar. We joined other Peregrinos, taking advantage of both food and drink that evening.

After dinner I took the opportunity to wander a bit and gather my thoughts.

Natalie, a pilgrim from France, made use of some extra butter left over from dinner to dress and waterproof the leather of her boots.

Up early the next morning, the near endless horizon drew me outside to witness the break of dawn.

On this day we would walk the finest section of extant Roman road in Spain of which our prior night’s accommodation was its namesake, the Via Trajana. The pristine condition of the 2,000 year old road speaks well of Roman engineering prowess.

It was once a main east-west corridor of commerce linking the gold fields of Gallaecia in the west, east through Astorga and eventually on to Rome. It was also a favored military artery for Caesar Augustus and in later centuries for the warring Moors and Christians, Charlemagne included.

In spite of its historical connection to centuries of commerce and violence the Via Trajana only presented us with peace and relaxing solitude.

I parted ways with Bernard as we neared the town of Mansilla de las Mulas where he intended to spend the night. On the other hand, I sought the bus depot in a different part of town where I could catch one of the frequent departures for an 18km ride into Leon’s city center. Christine had already been there since May 5th, staying in a hotel near the Cathedral and waiting my arrival. I would miss Bernard, but I would be joining my wife and missing a 4 hour slog through the industry and suburbs of Leon. Bernard and I continued to exchange emails over the remainder of the Camino. He even sharing a photo of the May 22nd reunion with his wife Catherine in Santiago and Catherine meeting Maggie.

My detour took me to the village of Reliegos (pop. 200) and through a neighborhood of curious “Hobbit Houses” which were built into the hillside. While some of these may have served as homes, most were “Bodegas”, where wine was stored at near constant temperature, protected from the scorching heat and sun of the Meseta.

As I neared Mansilla I saw in the distance a large pilgrim with a distinctive walk. I immediately knew it to be Henk. Rushing to catch up to him I saw that he had stopped to talk on his cell phone. This was not unusual for Henk as he maintained very close contact with his wife Alice back in the Netherlands. It was curious to me that the Germans, Gaby and Christine, were nowhere to be seen. The three of them usually traveled together.

Just before I reached him he clicked his phone shut and turned to face me. “Peeeter!” he exclaimed with his north European accent. “Henk, you saw me… where are Gaby and Christine?” “But of course I saw you. They are ahead waiting for us in the garden at the Albergue. I have just asked them to order our beers.”

A few minutes later Henk and I arrived at the Albergue, the ladies and two cold beers were waiting for us. Once more I enjoyed the company of, and a beer with, these dear Camino friends.

I didn’t know it at the moment, but this was to be the last time that I would see Henk in person. We remain in touch to this day. I am reminded that on the Camino “Buen Camino” is exchanged not only as a greeting, but also as an acknowledgement at parting that both the journey ahead and the future are unknown.

PS. During the 8 years that I attended Catholic grade school I was taught that there were only two ways of attaining Church recognized sainthood, being a martyr for the Faith, and being a Confessor (promoter) for the Faith, also called a “Soldier of Christ”.

As we walked across Spain I was occasionally reminded of the horrors of the Spanish Inquisition, the persecution of Jews, and the burning of alleged witches, all victims of religious persecutions at the hands of the Church.

In my adult years I am left to wonder whether those martyred “by the Faith” should not also have been declared saints.