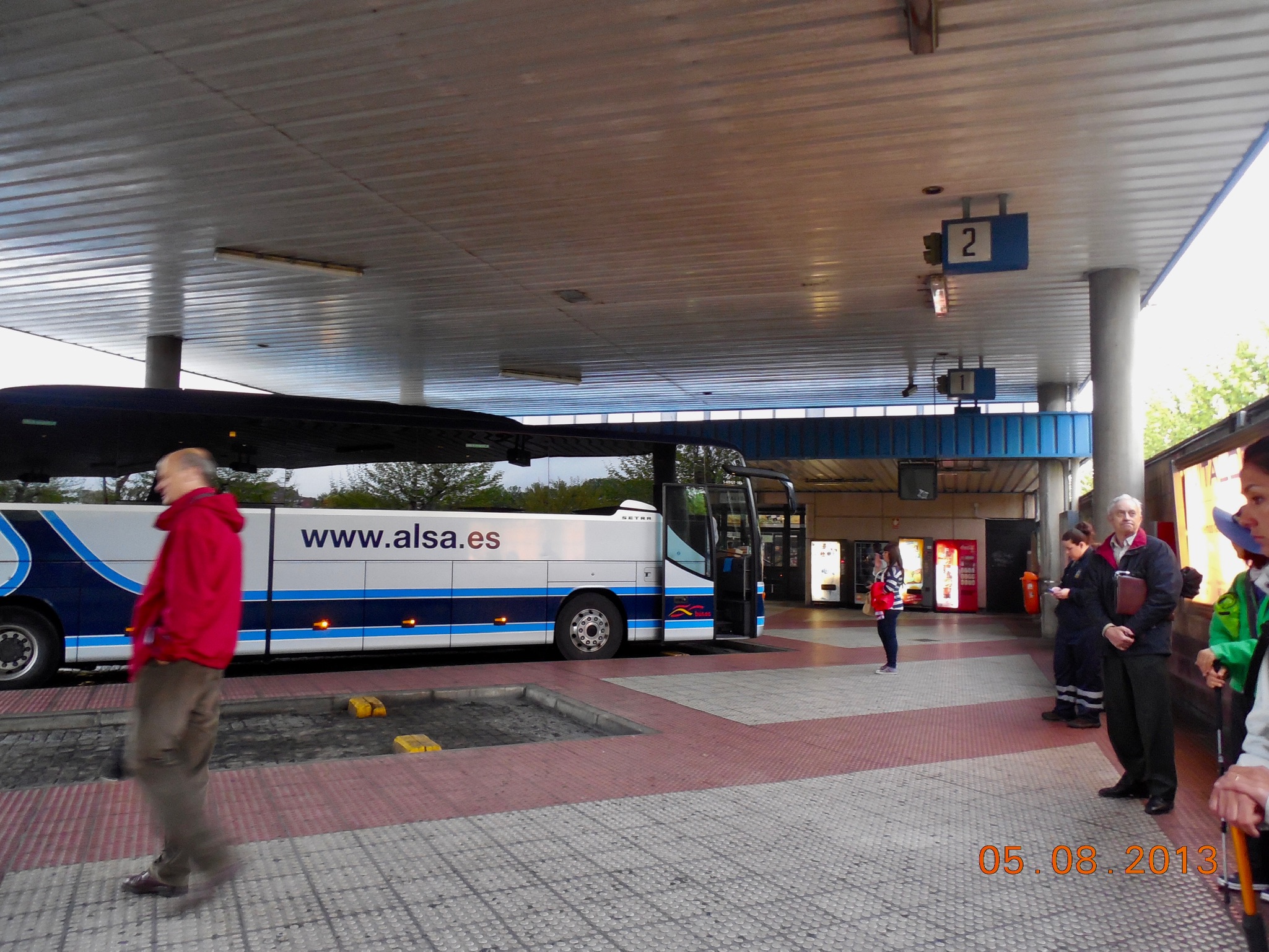 “Tomorrow I plan to bus out of Leon’s central city and 12km on to the end of the urban/industrial sprawl. I will then continue on foot from Hospital de Orbigo, site of a Medieval pilgrim hospital. It is also the site of an ancient bridge, portions of which date to Roman times. The bridge is 670 feet long and consists of 20 arches. My goal is to meet Christine in Astorga.”  -Written May 7, 2013 at Leon, Spain

What ALSA can go wrong!?! Leon to Astorga.

6:30 a.m. I wake and pack for bus ride to Hospital de Orbigo to be followed by an 18km hike to Astorga.

Breakfast with Christine at the hotel. Goodbye kisses are exchanged. “See you this afternoon in Astorga!”

8 a.m. I arrive at the bus station and confirm at Passenger Information that the ALSA bus to Hospital de Orbigo departs at 8:30 a.m. from space #3.

10 a.m. Christine shows up to take the 10:15am bus to Astorga. She has her ticket. The lady at the (mis)Information counter says, “No problem, the driver sells tickets. I and a few other Peregrinos decide to take this bus.

10:15 a.m. Bus arrives, I place my pack in the luggage hold of the bus. The driver DOES NOT sell tickets! I and the other pilgrims make a mad scramble to the ticket window where the (not-so) helpful ALSA lady says that it is too close to the time of departure for her to sell us tickets. We need to get tickets at the ticket machine. A short walk follows and  THE TICKET MACHINE IS BROKEN. Christine rescues my pack from the hold of the bus just as the driver is closing the luggage door. Damn close call that! The bus leaves without Christine since she is waiting for me to return from the non-functioning ticket machine. After an “animated discussion” with the lady at the ticket counter Christine gets a refund.

So much for the peaceful 18km walk on the Camino. St. James may have attended Mass regularly, but he never had to deal with Mass Transit.

Epilogue: In less than an hour the high speed train deposits us at the station in Astorga. With 53km of the Camino thus “erased” we have time to check-in to the Hotel Gaudi,

and do justice to visits to the local Cathedral, Museum, and a Palace designed by Antoni Gaudi.

A 7 p.m. Peregrino Mass and dinner follow, all shared with my wife. The day’s cloud has a silver lining.

May 8th. Astorga. The Silver Lining on a “Cloudy” Day.

“Getting to Astorga from Leon was a grand “Cluster F***”! However, the afternoon was a wonderful surprise. Astorga is a town of 12,000, with world-class art, a 13th century cathedral, and a palace designed by Antoni Gaudi.” Written at Astorga, Spain, May 8, 2013.

PS. Pictures and narrative from the extraordinary sites seen in Astorga will follow in the next post.