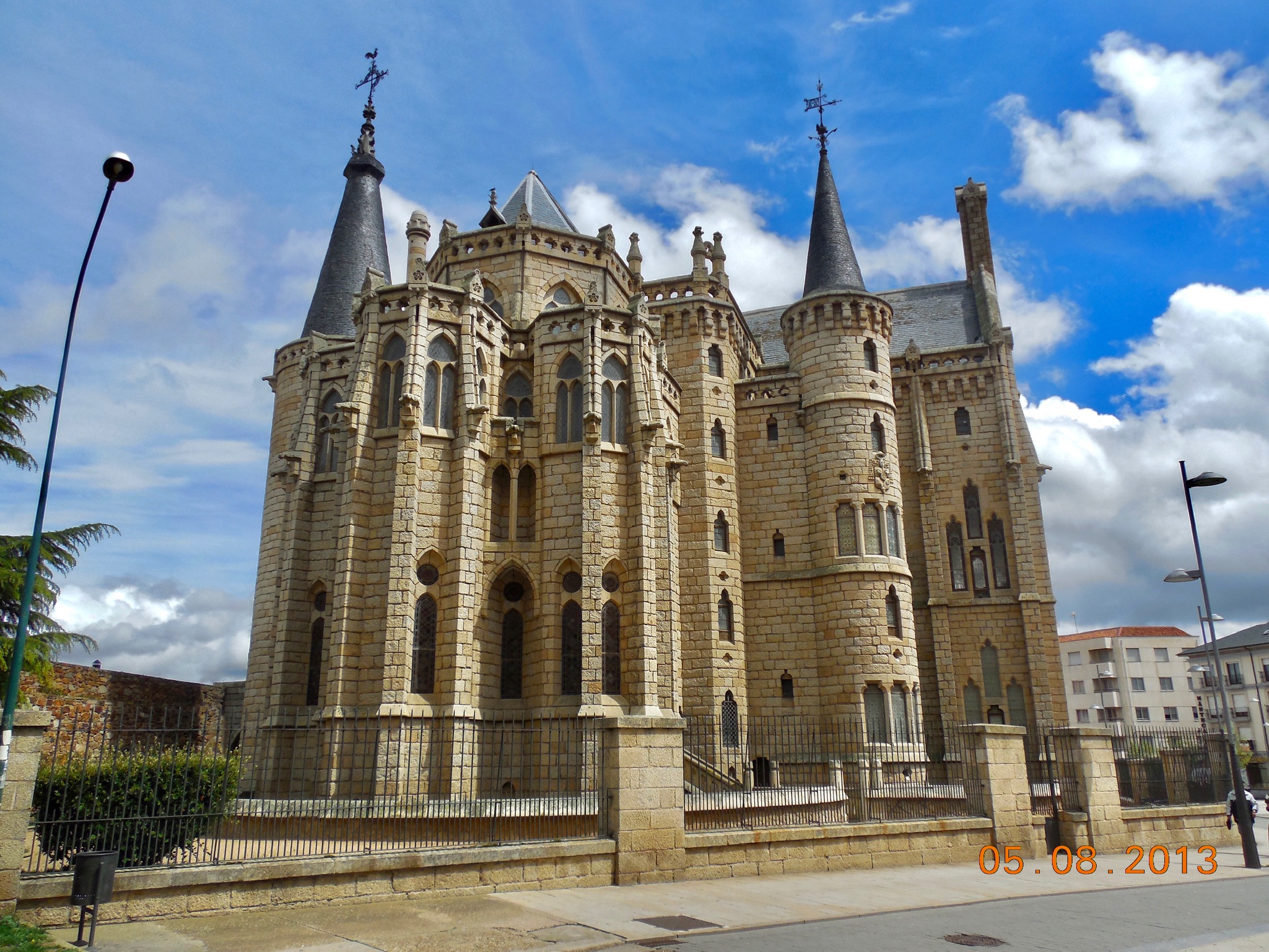 “Sorry that I can’t finger type all the details, but keep in mind that the sculptures, manuscripts, paintings, and robes date to between the 13th and 16th Centuries. There are a few really bizarre paintings which are presentations of someone’s medieval idea of hell, and which gender is the source of temptation. Perhaps the alchemists knew how to cook LSD in the 1200’s.” Written at Astorga, Spain, May 8, 2013.

We arrived at the Renfe train station just outside of Astorga in mid-afternoon. The “adventure” that resulted in our transport by train is recounted in the previous post.

Astorga’s size (pop. 12,000) is less than a tenth that of other major population centers on the Camino such as Pamplona, Burgos, and Leon, yet its historical footprint is just as significant.

The region in which Astorga is located was home over 200,000 years ago to the earliest hominids known to inhabit the Iberian Peninsula. Archaeologists have found evidence and artifacts of metal tool making at Astorga dating to 2,750 BCE. Celtic cultures inhabited the area in the 3rd Century BCE, and the location was an important Roman military outpost beginning in the 2nd Century BCE. The civilian town was established by the Romans in 14 BCE and featured elaborate baths, a thriving mercantile center, and significant fortifications. Roman ruins still dot Astorga, and portions of Astorga’s present day sewer system were constructed by the Romans 2,000 years ago.

Astorga was at the crossroads of Rome’s important gold, silver, and commercial transportation arteries. It also remained an important military stronghold. Pliny the Elder called Astorga a “Magnificent City” in CE 73 as he wrote about the 560 mile long Via de la Plata (“Silver Road”).

In the Middle Ages, as today, Astorga was at the crossroads of two major Camino routes, the French route and the Via de la Plata. In Medieval times over 20 pilgrim hospitals were located in Astorga. One of Spain’s oldest and largest dioceses was established here in the year 747.

The city and its imposing fortification walls were immediately impressive as we approached on foot from the train station. The Cathedral and Gaudi’s Palacio Espiscopal (“Bishop’s Palace) were visible above the ramparts that date to the Romans.

The 3 star Hotel Gaudi would be our home for the night and was conveniently located across the square from the Cathedral and Palace.

Regrettably, we did not plan an additional day to explore the town’s other museums, 9 plazas, and Roman excavations. There was just enough time to enjoy visits to the Cathedral, Cathedral Museum, and the Palace.

Catedral de Santa Maria de Astorga was magnificent although not rising to the scale, grandeur,  or significance of the cathedrals in Burgos, Leon, or Santiago.

Construction of the Gothic cathedral began in 1471 and extended over a period of 300 years. Thus, it features a mixture of other design elements, Baroque, Renaissance, and neo-classical among them.

The interior vaulting is magnificent,

as are the 97 hand carved chairs in the choir.

Especially noteworthy is the High Altar and statuary created in 1558 by artist and sculptor Gaspar Becerra, a former student of Michelangelo.

It seems that every church and museum along the Camino has its own version of an image of Santiago (St. James).

The Cathedral Museum presented a treasury of ancient texts,

and works of religious art. Some truly bizarre,

and others more conventional.

The crush of time and our desire to yet tour Gaudi’s Palace required us to hasten our visits through the Cathedral and Museum.

The Palacio Episcopal is  one of  only three buildings designed by Antoni Gaudi outside of Catalonia.

Gaudi agreed to undertake the project at the request of his friend Juan Bautista Grau, Bishop of Astorga. Construction began 1889 but was suspended shortly after Bishop Grau’s death in 1893. Disagreements arose between Gaudi and a committee appointed to oversee the continuation of Palace construction. Gaudi then permanently left the project in favor of dedicating the remainder of his life to the construction of the Sagrada Familia Basilica in Barcelona.  Construction of the Palace did not resume again until 1907. Management of the project was undertaken from that time to its completion in 1913 by Architect Ricardo Garcia-Guereta.

The building has served as a military headquarters during the Spanish Civil War, and since 1964 has been purposed as a museum dedicated to the Camino de Santiago. According to the Palace website it has never served its original purpose as residence for the Diocesan Bishop.

The Palace consists of 4 floors, including the basement. The collection of art objects deserves at least an afternoon’s visit. The Palace itself is remarkable art, worthy of focused examination. These few images that follow merely hint at the experience:

The chapel as seen from below and from the balcony above.

This iron cross was once mounted for veneration atop the highest point of the Camino. Today its place has been taken by a replacement where Peregrinos still stop to deposit a stone and perhaps pause for thoughtful reflection.