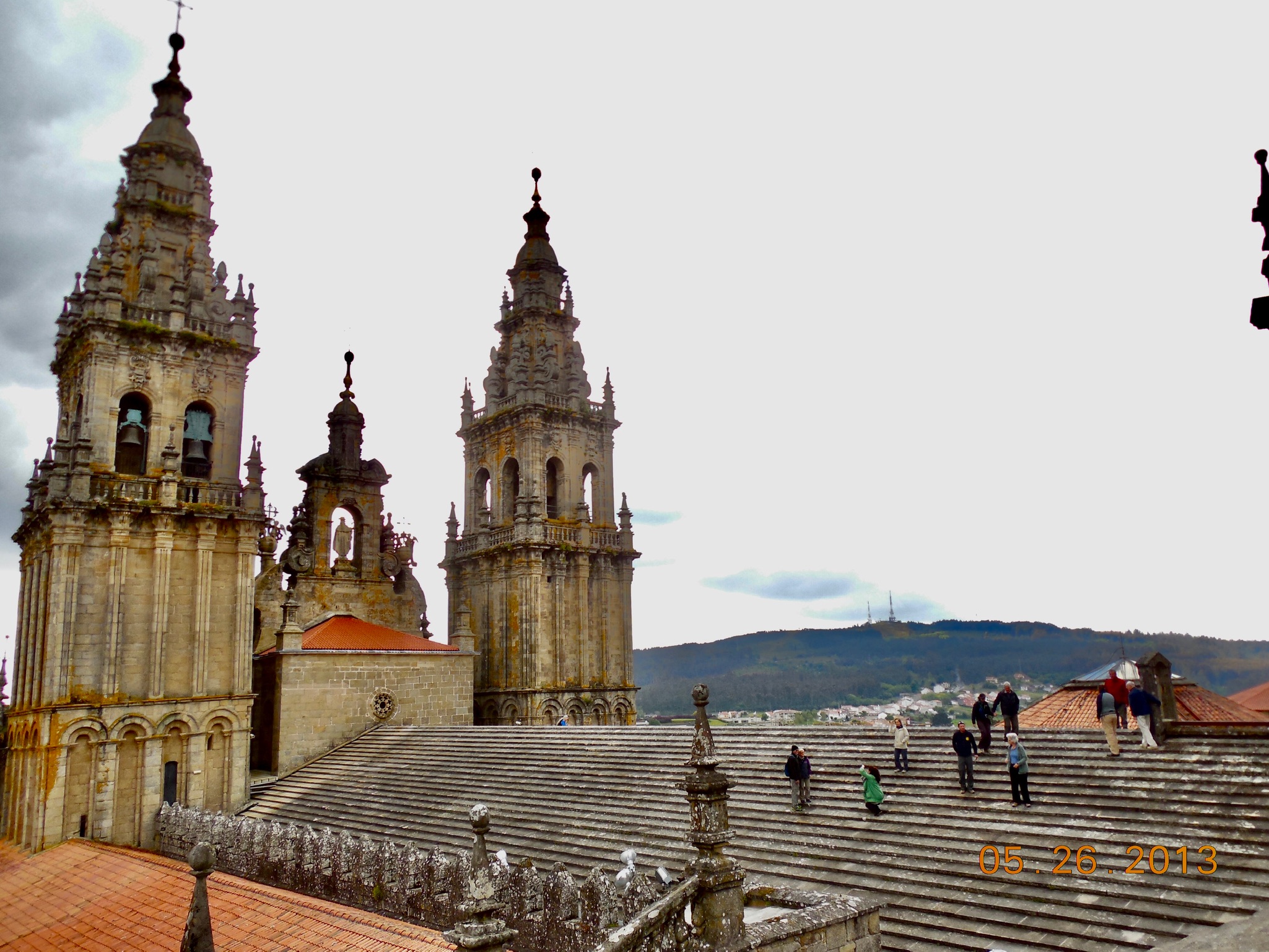 I had been told, “There will come a moment when you realize you are no longer a pilgrim on the Camino.” That moment came on the morning of May 24th when we boarded a bus bound for Muxia. On May 25th we continued on to Finisterre by Taxi. On May 26th we returned to Santiago.

“…you are no longer a pilgrim…” That is not entirely correct. Within each of us there had been change. We would return to the United States retaining the experience of Pilgrimage, and with that experience came a different view of ourselves and the world around us. Once begun, that pilgrimage is lifelong.

May 26th, Return to Santiago.

We were up early, but not as early as these two who were already surveying the neighborhood for an early meal.

Another well-appointed bus provided our return to Santiago. The tinted windows gave a blue-green cast to the view, saving the eyes but converting the vivid seaside colors to a single hue.

Back in Santiago we visited the Cathedral Museum.

The Museum contains an extensive collection of sculpture, paintings, tapestries, and ecclesiastical robes. My images only hint at the wonders.

Its library includes incredibly rare documents, including the 12th Century Codex Calixtinus, the first “guide” to the Camino.

Time for a more comprehensive tour of the Cathedral and grounds was available to us.

We had passed the 16th Century interior Porta Santa or do Perdon (Holy Door or Door of Forgiveness) upon our arrival in the City, but a longer look was in order. The passageway is only open during Jubilee Years, years in which the feast day of St. James (July 25th) falls on a Sunday.

In the cloister were three bells. Cast in the early 1700’s, these Cathedral bells cracked from use and were replaced by copies cast in the 20th Century.

The oldest existing parts of the Cathedral date to the 11th Century.

A literal and figurative “highlight’ of the day was a visit to the roof of the Cathedral.

Christine, who is not fond of heights, drew on reserves of courage to negotiate the unnatural surface. Her concern of a tumble to the edge and below were not entirely unfounded.

We had a clear view of Hospederia San Martin Pinario, where we were again staying.

From the roof we could peer into small windows and gaze upon the interior of the Cathedral from above. Here is a rare view of the statuary above the main altar.

We also gained access to the passages within the Cathedral, near the top of its barrel-vaulted ceiling.

This was a working space, not prepared for typical tourist eyes. Pieces of granite, fallen from the interior and exterior were carefully arranged on shelves. Perhaps they awaited some future restoration.

Huge figures were stored here as well, Gigantes y Cabezudos (Processional “Giants and Big Heads”). Giant wood and paper mâché figures, when mounted by a harness on the shoulders of a person, dance and gyrate in a festival or parade.

The tradition, found in Spain, Portugal, France, and Belgium, dates to at least the 13th Century. In Santiago these figures are featured during parades celebrating the feast day of St. James.

Our wanderings continued on May 27th and took in the prison-like Monasterio de Benedictinas San Pelayo de Antealtares. This imposing structure is located across from the Cathedral at the Praza Quintana.

Founded in the 11th Century as a Benedictine monastery, it became a cloister for nuns in 1499. The current structure dates mostly to the 16th and 17th Centuries. The exterior barred windows speak to the seriousness of “cloister” in ages gone by.

Within the building’s chapel were more reminders of the lengths to which separation of the sisters from worldly temptations was maintained.

We were told that this huge building, once teeming with religious, now has fewer than 50 in residence. Is also houses a small museum of sacred objects.

Tourist fatigue had set in for me. There were only a few pictures to preserve the day, including this one of Peregrinos celebrating their arrival.

Santiago had become a vacant, almost sad place for us. Gone were the familiar faces from 6 weeks walking the Camino. We knew inside that it was time to go home.

After the Cathedral had closed to visitors, we joined a group of 11 other pilgrims and a staff priest from the Cathedral for a private 9 p.m. prayer service in one of the side chapels. The Cathedral, dark and tomblike, resonated with echoes of our footsteps, there being no other masking sounds. There are no pictures for me to share of our small gathering. The members of our small group hailed from many countries. The priest asked for a volunteer to read a few short passages from the Bible. I offered and was handed the volume and proceeded to speak, pausing for the translations some required. It was a poignant “bookend” to my reading 6 weeks (and a lifetime) earlier at Mass in Roncesvalles.

After the reading we paused for a silent reflection. The priest then asked each of us, “What has the Camino Pilgrimage meant to you?” The few words that I shared that night with the priest, my wife, and 11 other Peregrinos have grown. Hiking across Spain! What started as an event on a “bucket list” turned into 51 “chapters”, 1,200 images, a telling that has taken more than 5 months, and the experience of a lifetime!

PS. Next: Return to Barcelona and Home.