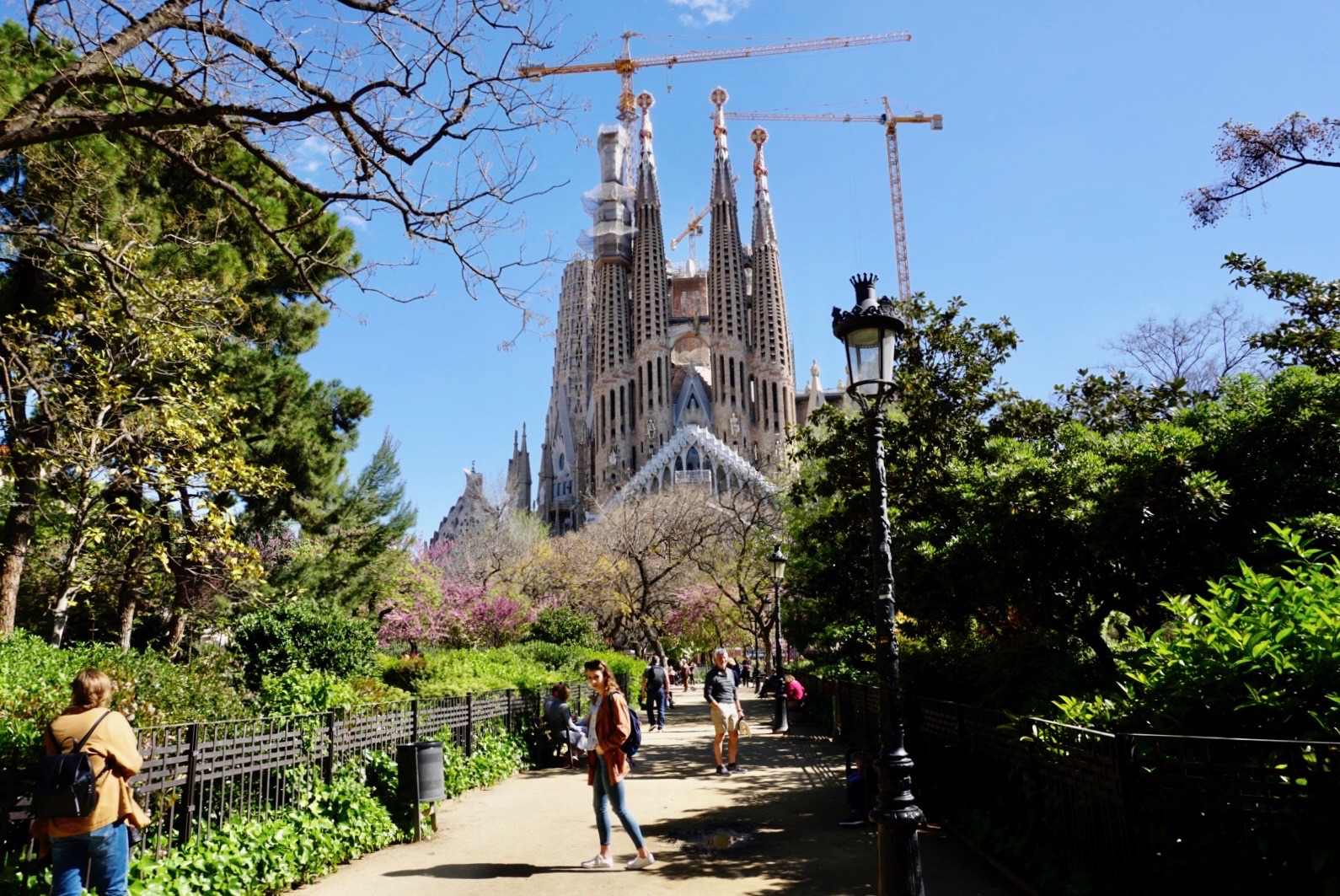 When did our Camino begin? Was it in 2011 as we exited a movie theater, inspired by the characters in “The Way”? Perhaps the beginning evolved during our discussions over the following year. More concrete: Maybe it was when we began buying our packs, hiking boots, and of course our “sporks”.

When we made airline reservations, was that the start? Or was it at Mass in Kansas City on April 5, 2013 when Father Bill and the congregation of St. Francis Xavier Church bid us farewell and the priest entered the first “sello” in our pilgrim credencials.

Any of these may have been the start of the emotional Camino. I believe that the physical Camino began when we landed in Barcelona, Spain on April 8, 2013.

When did our Camino end? Emotionally, as these hundreds of pages attest, it hasn’t. It could be said that our physical Camino ended with our arrival in Santiago on May 22nd.  However, part of the experience of our Camino was embracing the broader magic of Spain.  That alchemy continued with our return to Barcelona.

A pre-dawn taxi transported us to Santiago’s international airport. We were checked in and at the gate by 7 a.m..

The two-hour flight made a mockery of the 6 weeks that it took us to transit that distance by foot. Once on the ground we returned to Ana’s hospitality and the comforts of her centrally located Guesthouse. Kris Ashton also secured a room at Ana’s for the day preceding her return to the States.

Our belongings stowed in our rooms, the three of us proceeded the few blocks on foot to the Sagrada Familia. We had learned from our experience in April that reservations to tour the Basilica were prudent and depending upon the day, necessary. It was a Tuesday, yet the park in front of the church was active with tourists, vendors, and entertainers.

A quick walk around the Sagrada Familia disclosed progress in the construction accomplished over the 6 weeks since we first gazed upon its exterior.

The organic stonework of the Nativity Façade on one side of the Basilica and the linear sculptures on Passion Façade still amazed us with their stark contrast.

The first view of the interior was breathtaking.

These images only hint at majesty of the colorful stone columns that transform into an overhead canopy. It is like an otherworldly forest, everything drawing the eye up in wonder.

We had purchased tickets to climb and tour one of the towers. While somewhat physically challenging, Christine also had to suppress her discomfort with heights in order to enjoy the experience.

It was obvious that we were touring an active construction site.

Beneath the Church were the studios of the architects who work with computers and models to execute the transition from inspiration into reality.

There was also homage paid to the genius of Antoni Gaudi. In the late 19th and early 20th Centuries Gaudi did not have the benefit of computers to aid him in creating designs that were founded on his favored elements of circles, ovoids, and parabolas. Instead, he tied strings, weighted with small bags of sand, to give vision to his thoughts. Gravity created the non-linear flows which were reflected in a large mirror underneath the “string-cathedral”. It was from this that Gaudi was able to test and draft his concepts.

I could write an entire post (or two) about the Sagrada Familia. In fact, I did during our 2018 visit to Barcelona which was part of our walk on the Portuguese Camino. Rather than recount the narratives and those many images, here are links to those posts and pictures from 2018:

That evening we joined Brent, his wife Marilynn, and some of their Barcelona friends for dinner. It was a wonderful sharing with a true “Camino brother”. Sadly, Marilynn passed away on New Year’s Eve 2019. May she rest in peace. Before her passing they had returned to the States from the home they made in Barcelona. Brent now lives in “God’s Country”, otherwise known as Idaho.

Christine and I resumed our embrace of Barcelona with a fond reunion.

In the 1990’s we had been volunteer representatives for AFS, the foreign exchange student organization. One of the young adults who we had the honor of knowing was Neus Santacana from Barcelona. Over the years we kept in touch with Neus. She joined us for the day and evening as we toured “her city”.

When we flew back into Barcelona from Santiago we saw mountains near the city that seemed to rise from the surrounding land like shark’s teeth. From the tiny windows of our plane I could also make out buildings that appeared to be built into the cliffs. Upon inquiry we learned that this was the Montserrat (“serrated mountain”) Range, rising over 4,000 feet above sea level.

The buildings were the Santa Maria de Montserrat Benedictine Abbey.

An easily navigated train ride took us 30 miles to the cable car station.

We boarded the 83-year-old conveyance for the dizzying ascent of nearly 4,000 feet to the Monastery.

Founded in the 11th Century, and rebuilt in the 19th and 20th Centuries, the Monastery is world renowned. It is home to over 70 monks, and can now be reached by road, train, or cable car.

There is also a cog railway that took us farther up the mountain to the remains of the ancient Chapel of Sant Joan and ruins of hermitages, some believed to have been inhabited by Sant Joan (John) and Sant Onofre.

The precarious stairs and passages were once the only access to these remote habitations.

Hermits are believed to have lived in these mountains as early as the 6th Century. Chapels were known to have been established by the 9th Century, and more formal monastic communities not long after. Monks were held to extremely strict vows beyond those of poverty, obedience, and chastity. Among those requirements were total detachment from the outside world, complete abstinence from meat, arduous regimens of fasting, self-flagellation, and denial of virtually all worldly comforts.

In addition to the grounds, panoramic views, and history, highlights of a visit included witnessing a performance by the Escolania de Montserrat boys’ liturgical choir and seeing the 12th Century La Moreneta sculpture also known as the Virgin of Montserrat.

The choir is a 700-year-old institution consisting of boys who are educated and boarded at the Monastery. These 50+ boys are between the ages of nine and fourteen and perform each Monday thru Saturday at 1 p.m.. On Sundays and Holidays they perform at noon and again at 6:45 p.m..

By some accounts, the 38-inch Virgin of Montserrat dates to early Christianity. Alleged to have been carved in Jerusalem, legend holds that it was discovered in one of the nearby mountain caves where it had been hidden from marauding Saracens.

More likely it dates to the 12th Century. For hundreds of years the statue has been venerated by commoners, royalty, popes and saints. On March 25, 1522, St. Ignatius Loyola laid down his weapons and armor before the statue, thus beginning a period of asceticism before later founding the Society of Jesus (The Jesuits).

We returned by train to Barcelona for dinner, packing, and a night spent in sleepless contemplation of tomorrow’s departure for home.

Our packs were secured in duffle bags for the flight home.

Rare for us, we were traveling first class. This was largely due to an accumulation of frequent flyer miles. The perks included access to the private lounge area, stocked with alcohol and snacks at no additional charge.

Thankfully, we were isolated from the airport crowd until it neared time to board our plane.

The real advantages of first-class seating came in the form of large comfortable seats that fully reclined into sleeping position, and of course liberal servings of adult beverages.

We resisted casting aside our pilgrim identities. Onboard the plane we each continued to wear our shells, and I my beret.

Heading into the clouds with the last views of Barcelona below us, I was well into my second glass of white. I gazed out the window and reflexively pulled out my tiny iPod-Touch. One finger-stroke at a time I began to type, “Tir na nÓg”, “The Land of Eternal Youth”…

Next: Epilogue, The Final Chapter