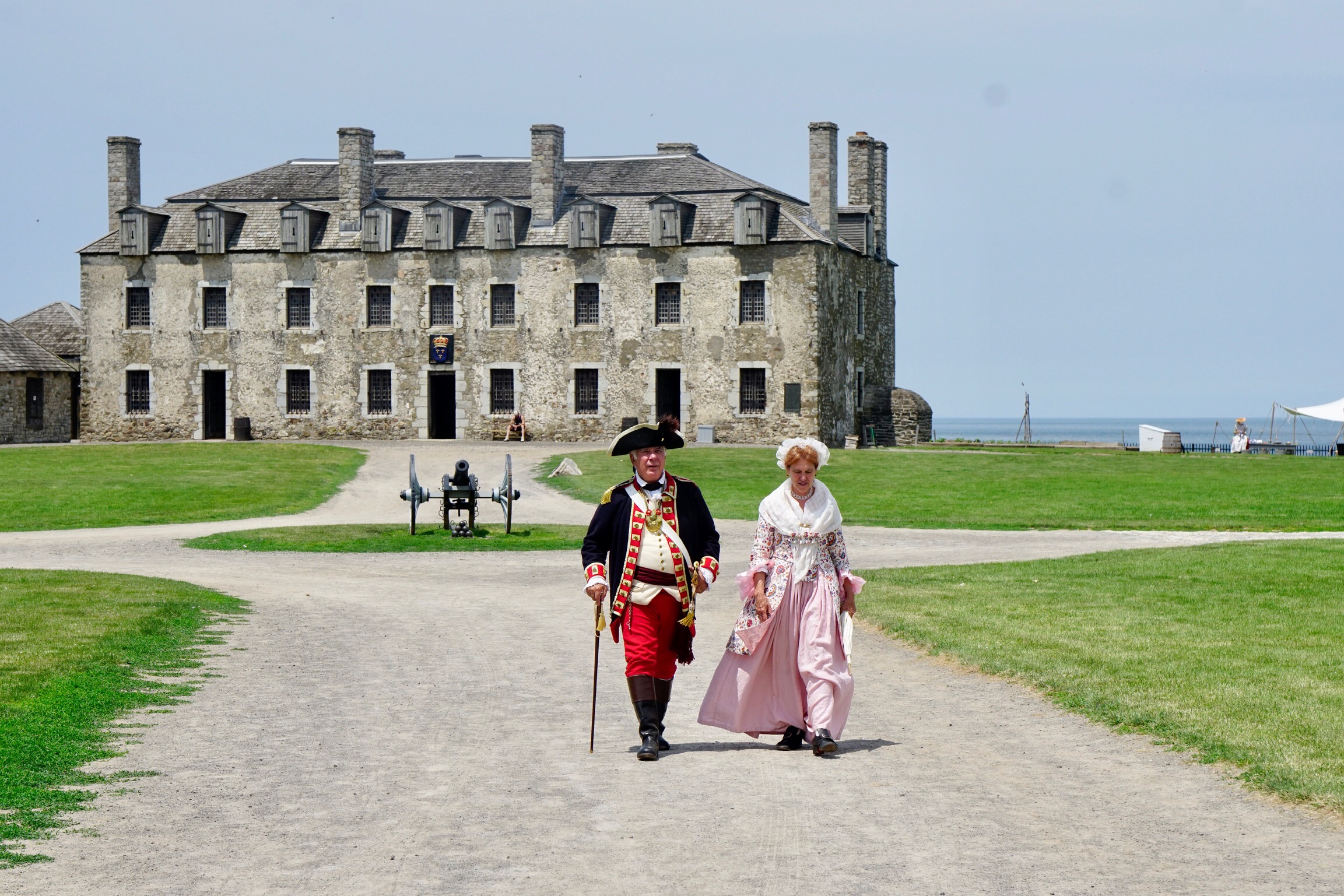 June 14-15, 2022. The highlight of these two days has been a visit to one of the oldest military installations in North America. Fort Niagara has served troops under 3 flags and its origins date to 1678.

The three flags, British, American, and French naval, are in the configurations as flown in their era. The French naval ensign, a white flag, does not symbolize surrender. Rather, the tradition of a white flag being one of surrender was not adopted until over 100 years later.

It even housed German prisoners of war during the Second World War. But before I launch into more detail about this fascinating historical treasure a bit about where we are staying.

We arrived for two nights in New York’s Golden Hill State Park the afternoon of June 14th. The park is small by most New York State Park standards.

Our campsite has water and electrical hook ups so we could use our air conditioner, however, the cool Lake Ontario breeze made that totally unnecessary. The park features the 70 foot tall, “30 Mile Point Lighthouse” that dates to 1875.

It was built at a cost of $90,000 and once housed a 3rd order Fresnel lens that magnified a single kerosene flame to an equivalent of 600,000 candle power. The beacon was visible for over 18 miles.

The above image is of the St. Simons, Georgia, Lighthouse 3rd order lens.

Sadly, the lens assembly which stood over 6 feet tall, and its clockwork mechanism that rotated the beacon were removed by the US Coast Guard in the late 1950’s and have subsequently been lost. The lighthouse is open for tours and presents an accurately restored interior.

A second lighthouse keeper’s quarters, also attached to the main structure, sleeps up to six adults and is equipped with modern facilities. It can be rented at a cost of $200 per night.

Now back to Fort Niagara.

France was the first European colonial power to systematically explore the interior of northern North America. It found numerous opportunities for wealth, one being in the lucrative fur trade. The only practical way to reach the continent’s interior was by water. France soon learned of the extraordinary resources of the Great Lakes, and that these tremendous bodies of water emptied into the Atlantic Ocean, first passing into Lake Ontario through the narrow straights of Niagara, also called inaccurately the Niagara River. At the site of Fort Niagara this “river” is less than a mile across, and provided an ideal location for securing military control over the commerce of the Great Lakes.

The greatest military power in the region at that time, and perhaps in North America, was held by the 5 nation Iroquois Confederation. France asked permission of the Confederation to build a “Peace House”, representing that it would be a large house in which to hold meetings and house tribal and European dignitaries. However, the “Peace House”, although resembling a large chateau, was specifically designed as a fortification.

The walls were stone constructed and 4 feet thick. The first floor had iron barred windows, and the open area third floor featured dormers with openings extending outward, thus permitting defenders to fire directly down upon any attacking force. There were accommodations for enlisted men and officers. Finally, the “house” water well was located inside, along with a secure powder magazine.

As this was a French built fortification, it even had a Catholic chapel.

By the time that the Native Americans realized the subterfuge it was too late for them to stop the continuing expansion of the fortifications.

Great Britain, however, chafed at the French effort to monopolize North America. In a number of the Native American Nations England found ready allies. War became a foregone conclusion between these historic European rivals. Arguably, the French and Indian War (1754-1763) was a true World War as it engaged multiple nations on two continents and at sea.

Fort Niagara was such a prize that the British focused their efforts upon its capture. For 19 days France successfully withstood a British siege. However, the British learned of the location of a 1,000 soldier French relief detachment and were able to lay an ambush, killing over half of that number and dispatching the remainder into retreat. The fort then fell to England.

England continued the expansion of the fortifications, adding a huge powder magazine with 12 feet thick walls and ceiling, and two “redoubts”, which are forts within forts.

Fort Niagara again played a role during the American Revolutionary War. It was held by Colonists who remained loyal to Great Britain. Britain ceded the fort to the victorious Colonies in 1783, yet the “loyalists” retained possession for another 13 years.

During the War of 1812 the Fort’s guns sank the British ship Seneca. A year later the British recaptured the fort thanks to Fort George, located across the river, having a 9 foot height advantage that made the difference in the artillery duel. Again Britain ceded the fort back to America at the end of that conflict.

A huge American flag had flown over fort Niagara at the time of its capture. This flag was commissioned by the same senior officer who ordered the flag that flew over Fort McHenry, the inspiration for Francis Scott Key’s poem which in the 1930’s became our National Anthem, The Star-Spangled Banner. The flags were of similar size, measuring over 30 feet long, and made by the same women. Fort Niagara’s flag, however, did fall into British hands.

The Fort has since served as a defensive and training post in the American Civil War, Spanish American War, World War I, and as I have said as a prisoner of war camp in World War II. It continued to be an active Army facility up until 1963. Although it is now a historical site, just outside of its walls is a US Coast Guard Station.

The following are additional images, some with brief explanations.

Along the shore of Lake Ontario one can see the skyline of Toronto on a clear day. We were also treated to a spectacular sunset. From our camp the sun sets upon our “Northern Neighbor”.

German born, Leffman enlisted as a young man in the German Hanoverian Army, and then the British Army, serving as a private in 1817 at the Battle of Waterloo. By 1824 he had come to the United States, enlisting it the US Army.

Leffman served until he retired in 1879 at the age of 81. He achieved the rank of Ordinance Sergeant, then the Army’s highest non-commissioned rank.

He served at Fort Niagara from 1845 until his retirement, and for 10 of those years he was the only soldier manning and maintaining the fort! Through a special act of Congress, Leffman was the first enlisted man to be awarded a pension by the United States Armed Forces. He is buried at Fort Niagara along with his wife and members of his family.

He is one of the “known” soldiers interred among the “Unknowns” who fell in the French and Indian War, the Revolutionary War, and the War of 1812.