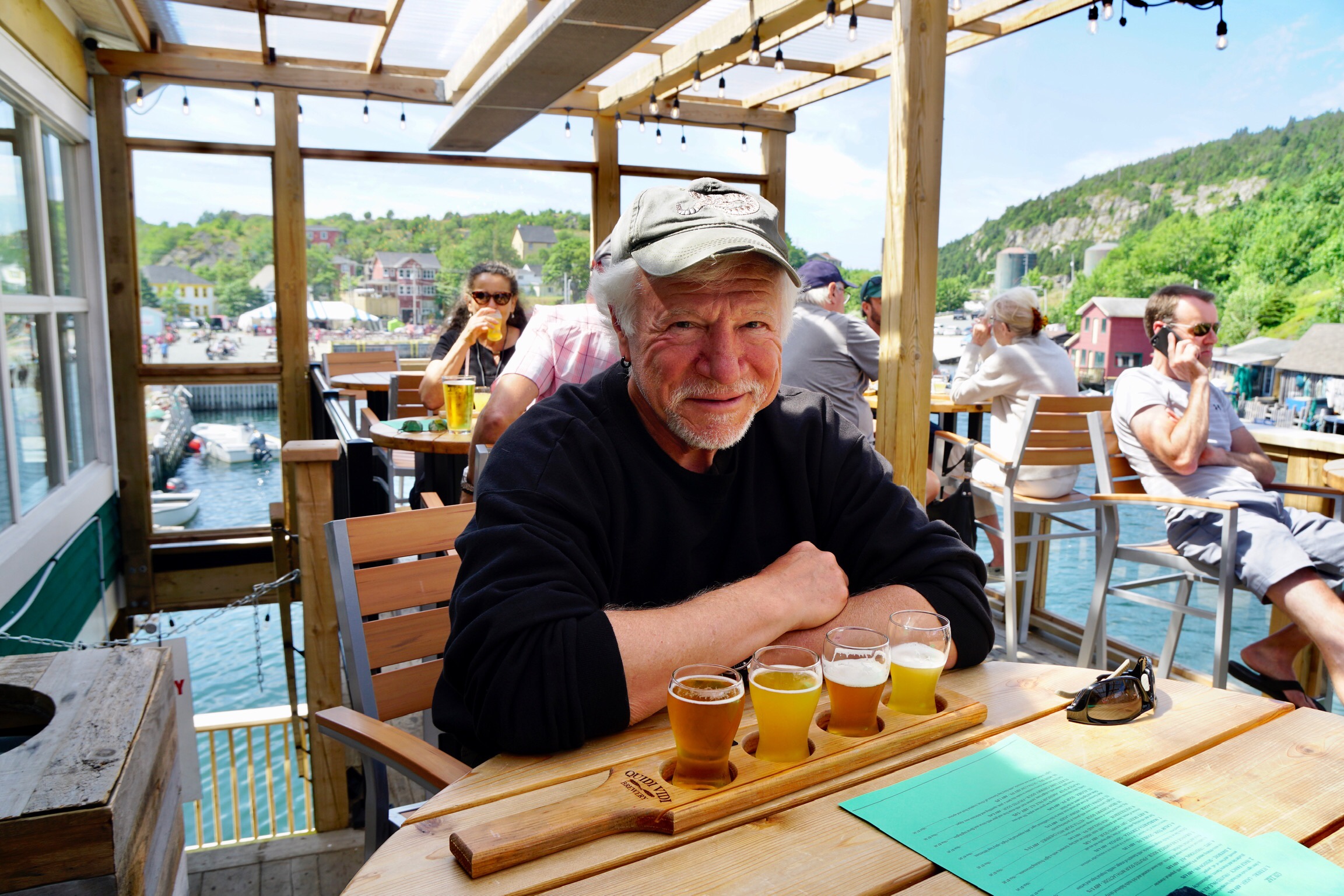 We have reached the easternmost extent of mainland North America, and perhaps the limits of our travel tolerance. The course of our journey has so far covered nearly 6,000 miles and consumed over 400 gallons of gas at a cost of nearly US $2,500. It’s been worth it.

St. John’s is a tourist destination, a major seaport, and a focal point for many historic events. It played a role in the Seven Years’ War (the French and Indian War), the American Revolution, the War of 1812, and each of the World Wars. It is also known as the location where Guglielmo Marconi first demonstrated the ability of his wireless communications technology to bridge the Atlantic Ocean.

In 1494 John Cabot, a Venetian in the service of England, became the first European to sail into its harbor. It became a European fishing camp in the early 1500’s, and a permanent settlement around 1630.

It is a cruise ship destination, but thankfully there were none in port during our visit. This may explain the relative quiet of the Water Street pedestrian zone and shops near the harbor.

Despite the excited urging of the delightful Monet at the Visitors Information Center, a not-quite-20 year old new in her first major job, we did not visit any of the many museums or centers of culture and government. No doubt they are worthy of the time, that we unfortunately did not have. We did take in enough to render rewarding our three days in St. John’s.

Pippy Park is the municipality’s main park and green space. The park includes a huge forested campground with fully serviced campsites. We camped there three nights, departing the morning of July 23rd. Campfires are not allowed, and the sounds of the city intrude upon the experience, but in all other respects it was pleasant. Since our focus was on seeing what the metropolitan area had to offer we actually spent little time in camp. Driving into the heart of the downtown took less than 10 minutes.

What we saw and experienced began with the 17th Century Port Wine Vaults of the Newman Company. Katherine explained the history of these vaults within which Portuguese Port from the Newman Company of Porto aged in large barrels before returning to Portugal for sale. It was believed that the constant movement occasioned in a cross-Atlantic ship journey together with St. John’s climate, rendered exceptional the Port wines aged here. Our host was excited to learn that we had walked the Camino, which she hopes to do within the next two years.

We took in Water Street which is often closed to traffic, George Street which features a crush of nightclubs and bars, and the nearby neighborhoods with their colorful row houses.

Dominating the cityscape is Signal Hill. During the colonial period it was the site of years of armed conflict between France and England. Whoever holds Signal Hill, holds the harbor and St. John’s.

This National Historic Site can be reached by car, or by a steep hike. I chose the hike from a lower parking lot, and in the process passed some re-enactors.

It was here that Marconi first demonstrated his wireless cross-ocean communications technology which changed the world.

The views from Signal Hill were amazing, as was the stiff gusting wind.

In the distance one could just make out a lighthouse on a jut of land. This was the Cape Spear Light and National Historic site.

Not more than 2 miles by line-of-sight, it was a winding 30 minute drive to get there. We had been cautioned to beware of moose as there are many in the area. The blind curves of the road make for frequent collisions between the huge animals (up to 1,200 pounds) and inattentive drivers.

Moose are not native to Newfoundland, but a few were imported onto the island from Labrador in 1878 and their numbers have since exploded to an estimated 120,000. We have yet to see a moose on this trip.

The light was built in combination with the light keeper’s cottage, which has been wonderfully restored.

The interior has a few windows, but there appear to be many more on the exterior. In a nod to form over function the builders obsessively embraced symmetry by incorporating many “false windows” into the exterior.

Cape Spear was also a Second World War army base. Here two huge artillery pieces protected the approaches to St. John’s Harbor, which was the main port for naval ships that protected convoys of materials and troops to Europe from Nazi U-Boat “wolfpacks”.

One of these German submarines made it to the mouth of the harbor, launching 2 torpedoes which fortunately exploded harmlessly on the cliffs surrounding the harbor entrance.

Cape Spear is now served by a more modern lighthouse.

The Cape is also the easternmost point of land in mainland North America.

At the moment that this picture was taken I was the continental North America’s easternmost human.

Arguably, this is a distinction I once held on the westernmost point of Europe.

From the 1600’s this was a seasonal fishing port. Each spring English fishermen would arrive and inhabit small “fishing rooms”, departing with their salt-preserved catch in the fall.

A number of these little cottages remain.

Our first visit was for dinner (expensive!) in an 1820’s cottage, and the second for a more relaxing (and less expensive) lunch paired with excellent beer at the Quidi Vidi Brewery.

We departed St. John’s the morning of July 23rd, concluding our 3 night stay in the city. More important to us, we are now heading west. That does not signal the end of interesting sites and experiences, one worthy of attention grabbing souvenirs appears in my next post.