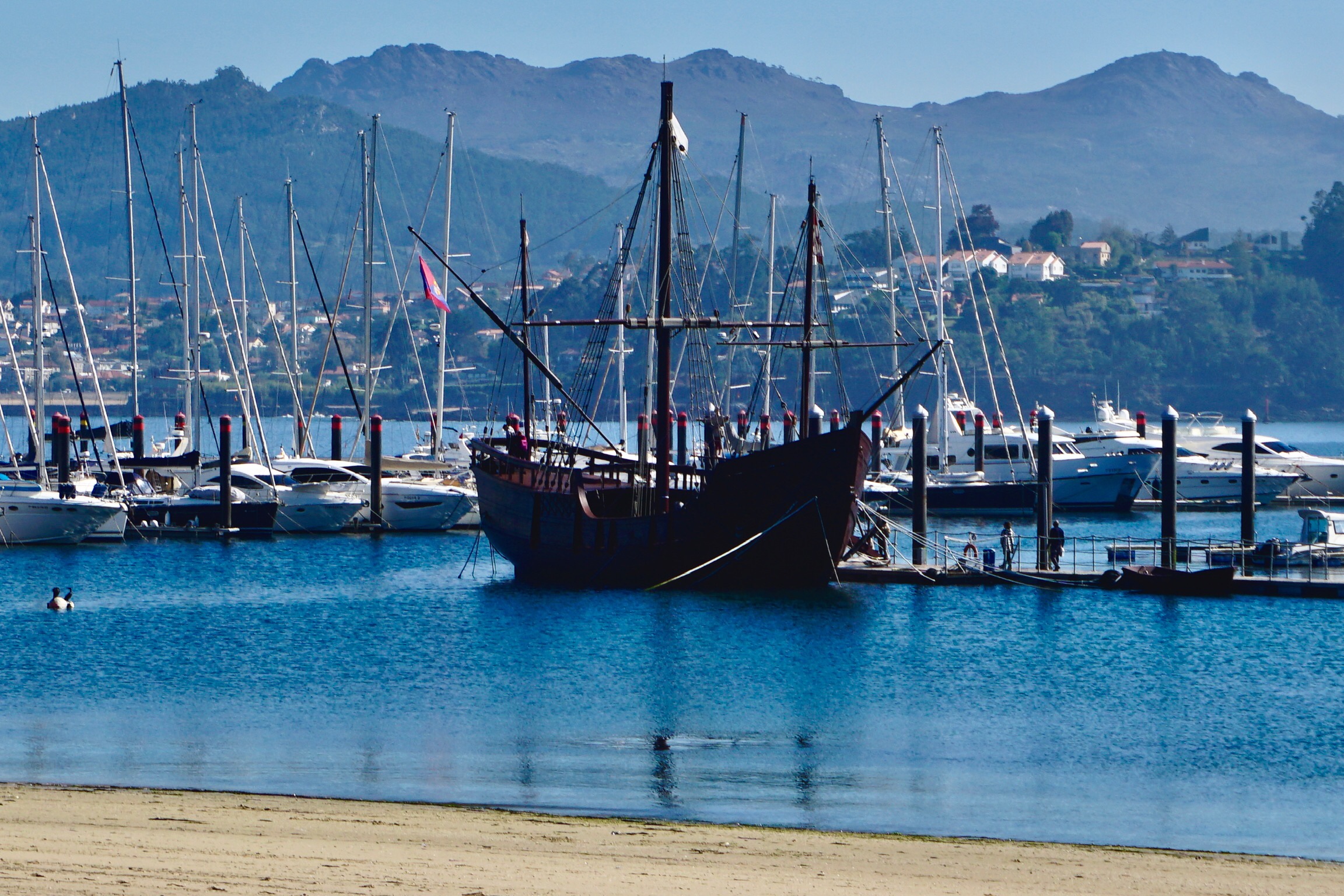 Dear Christine. What a grand day this has been! I meant this to be a rest day, and it has been with the exception of my feet. I have accumulated nearly 20,000 steps touring the town of Baiona today, approximately 10 miles and I am not through. I am meeting Ken and Bambi this evening at the Parador for drinks and dinner. Perhaps that’s a good place to start sharing my day:

As you may recall, Paradors are historical structures that have been taken over by the government and converted into top-flight hotels.

It’s a great concept that preserves history yet minimizes cost while serving a modern purpose that promotes tourism.

This Parador is not quite as exceptional as the ones that we saw in Santiago de Compostela and Leon. The cost is also not as excessive. I could have secured a room here for €85 a night, far less than the €200-300 that is quoted in Santiago.

This one is situated within the confines of a huge fortress. There is a walkway around the perimeter of the fortress that is 3 km long. I wasn’t aware that one had to be a guest of the Parador in order to walk the grounds and the upper wall. No one stopped me, so no harm no foul. I ended up walking both the lower and upper perimeters.

Visible from the Parador is the 50 foot tall statue of Our Lady of the Rock.

Her construction began in 1930 atop a small mountain near the seashore. She was completed in 1953. The climb to the foot of the statue consists of irregular stone stairs and The Stations of the Cross.

She is huge! These pictures do not give the best perspective of size. However, you will see that she holds in the crook of her right arm a boat.

One climbs to the boat, which is a viewing platform, through the center of the statue. It is an extremely tight winding staircase that is not more than 18 inches wide.

The view from the top is extraordinary but not for the faint of heart. There is only enough room on the platform for two or three people at a time.

In the harbor is an exact replica of Columbus‘s ship, the Nina.

She sailed into this port and took on final provisions before crossing to the New World. Upon her return from “discovering America“ The captain made this his first landfall in Europe so that he could personally deliver the news of the great discovery. The town celebrates this event every year with a festival on March 1st.

The ship had a crew of between 27 and 30, including the captain and navigator. It’s hard to imagine that this ship was capable of an ocean crossing.

Sometime ago we saw a replica of the Pinta and on another occasion the Santa Maria. By my recollection the Santa Maria was not much larger, and the Pinto was quite a bit smaller. These vessels has more in common with a large bobber than a sailboat.

Finally, I visited Saint Maria Church which dates to the 13th century.

What is most interesting is the clarity of the stonemason marks throughout the interior. These “signatures“ were placed by the stonemasons as proof of their work and entitlement to compensation.

I have made reservations for the next three nights which will see me to Pontevedra, only 70km from Santiago. However, I am considering taking an alternate route known as the “spiritual variant“ which will add approximately 40km to the total distance. That final decision is pending.

Going to get this posted before I head off to meet Ken and Bambi. I hope to get to bed early in preparation for the long day ahead.