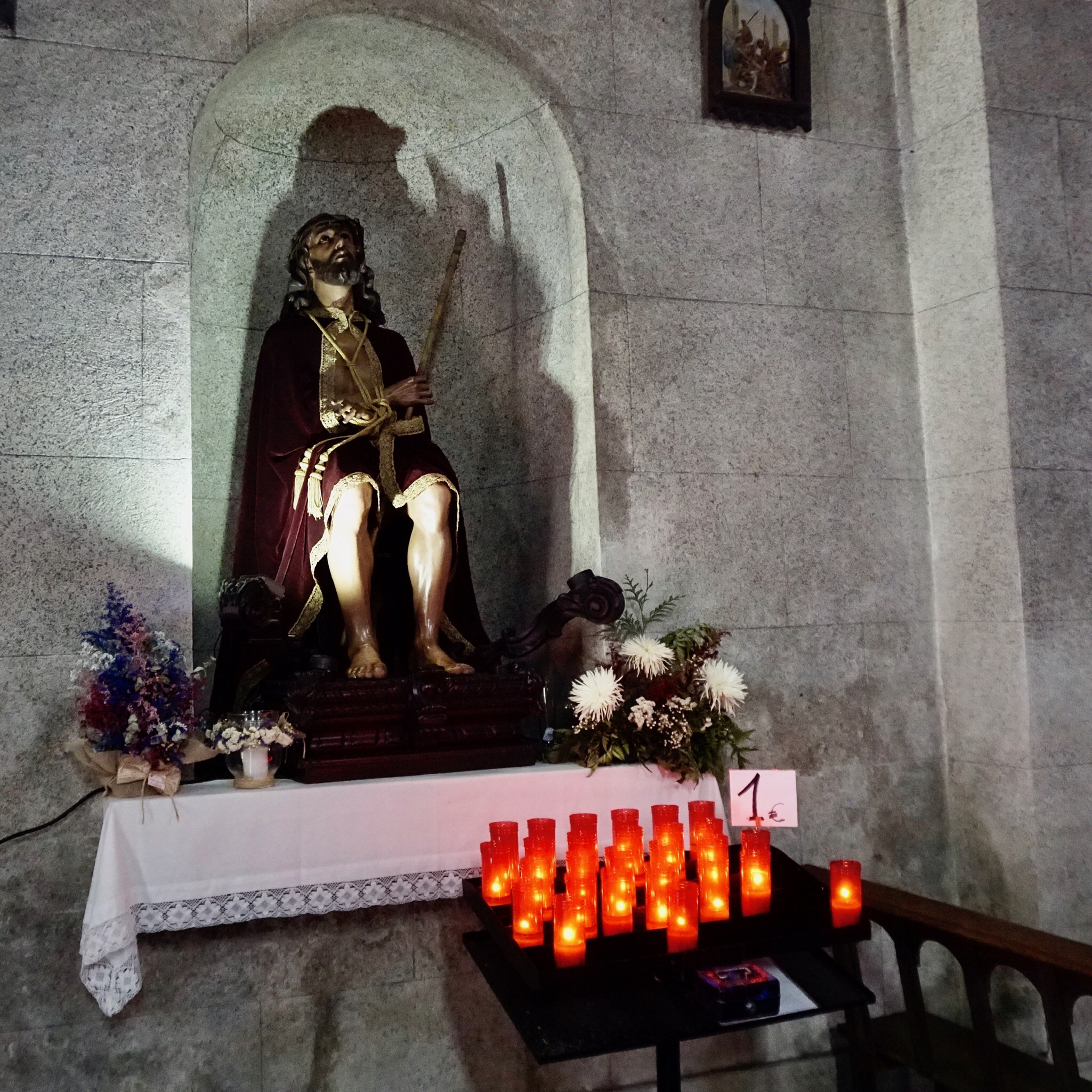 Dear Christine. Yesterday was the surprise conclusion of one Camino highlight that we were not aware of in 2018. The city of Padron is reputed to be the place where the earthly remains of Saint James landed ashore in a stone boat. The vessel was secured by tying to an ancient stone bollard. The coffin was then wheeled overland to its final resting place where it would be discovered hundreds of years later. This was the start of the Santiago legend and pilgrimage traditions.

What we didn’t know in 2018 was that by walking the pilgrimage and visiting the church where the original stone bollard remains, enshrined beneath the altar of the church built around it, we were entitled to the Pedronia Certificate.

I would’ve missed this again had I’m not been told by the lady at reception in my Padron hotel.

On the road this morning I visited the church of Iria Flavia where Saint James preached in the very earliest days of the church. Archaeologists verify the remains of a church that dates to the early 500s and was later sacked in 997. The “new church“ dates to the 12th century! Next to the church were a number of excavated stone coffins.

Yesterday I again walked in the company of Tina.

We spent enough time speaking German that I began to experience the “language headache“ so often described by our former exchange students. She is very encouraging and even surprised by the extent of my vocabulary. She says I have to work on pronunciation.

All in all it was an excellent day that included some unusual sites.

I attended mass which was also unusual, both for my attendance and for the manner with which it was presented. A woman read the gospel and the priest took two communions while none was given to the congregation (only about eight people in the huge and ancient convent church).

It is my speculation that this is because of Covid.

Rather than walk the 25 km into Santiago today I chose to walk 10 km to a midpoint, spend the night, and then proceed tomorrow with the remaining 15 km so as to arrive early at the Cathedral Square.

Hotel options were limited and I chose Pension Pividal, a bit steep at €60 for the night. A better name for it would be “Hotel 60”, same quality as Motel 6 in the States, just more expensive.

My room was clean (a good thing), and sterile but not in a good way.

At least there was a bathtub with the promise of a hot soak, or so I thought. There was no stopper in the tub. I went down the two flights of stairs to reception, but no one was there. I then walked to the adjoining bar/café which also serves as the reception. Using my translation app I asked for a stopper. I received a polite “no“, it seems that the hotel doesn’t have enough hot water to fill the tub! They suggested I just use the shower.

Unhappy and frustrated I set off on a long hike to cool my jets. About a mile and a half from the hotel the skies darkened and I got caught in a torrential downpour. That certainly “cooled my jets”! I was soaked through and through. By the way, although the hotel advertised a laundry service, it was not available.

I ended up wearing my wet clothes to allow body heat to facilitate drying. I had a couple of beers and a reasonably decent pizza at the bar and then returned to my room.

It was like a refrigerator. Time to turn the heat on… You guessed it, no heat. Back to the bar/café and with the aid of my translating app I explained this new situation. A somewhat exasperated lady met me back up the stairs where she was going to show me how to turn the heat on. it didn’t work for her either.

The hotel is virtually empty (what do they do for hot water when it’s full!) and she began to open almost every room on my floor looking for one that had heat. After half dozen tries she succeeded. I am now in a room with three twin beds. Still no stopper in the bathtub.

When I got caught in the downpour, but after I was already soaked, I did find some shelter at a gas station. The station had a limited selection of food items. I was able to buy a few things for an early morning breakfast.

It’s my intention to hit the road at dawn and make it to the Cathedral by noon. My order of business will be to register at the pilgrim office, get my certificate, and check into my room. The weather does not look promising… more rain. I have reserved two nights at (hopefully) a decent hotel. I look to begin my hike to the Atlantic coast on Friday. I am allowing myself 12 days to cover that additional 210km. It’s doable, but I’m going to “listen to my body“ as you have ordered.

Hopefully, I will find some peace tomorrow in Santiago. At the minimum I’m looking forward to a beer courtesy of Ken and Bambi who arrived in Santiago yesterday.

Don’t worry about me. I am confident that this day will pass… just like a kidney stone!

Love you Dear! Me

PPS. Overnight there has been a terrible storm, complete with incredible wind, thunder, lightning, and hail. The rain is predicted to continue.