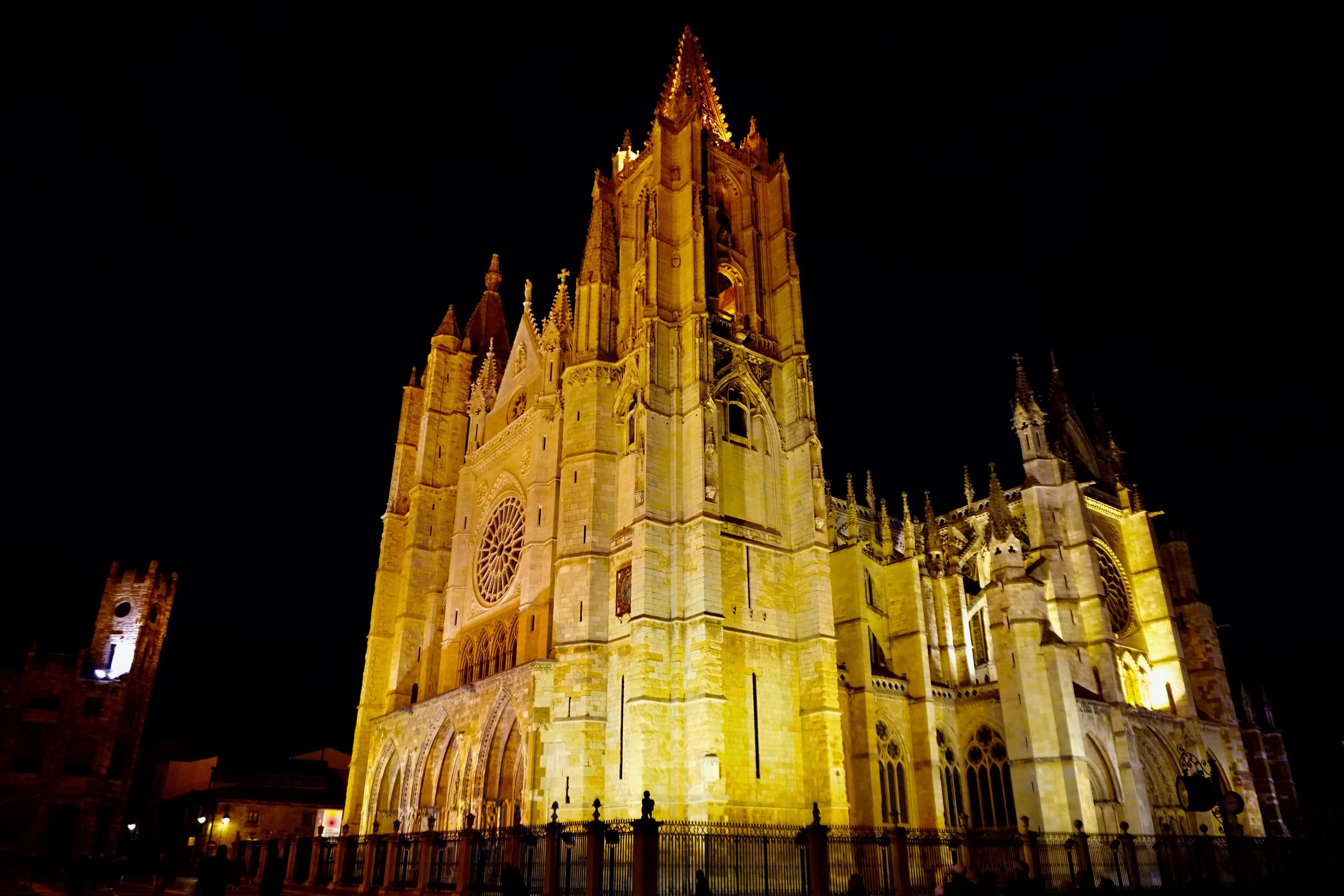 Dear Christine. After another excellent Hotel breakfast this morning I again enjoyed wandering the streets of Leon, especially the serpentine corridors of the old medieval city that was built outside of the Roman walls.

…and a delightful little church that featured a 400 year old model of a ship that was donated by a grateful captain who survived war at sea.

A real highlight was the museum of Saint Isidore of Leon. With camera ready imagine my disappointment when I was told that pictures were not allowed. I desperately wanted to provide you at least the image of the candidate for “the Holy Grail”. Not to get over the top about this, but it is a chalice comprised of two ancient bowls made from Roman onyx, one of which scholars have reliably dated to the first century.

The museum provided an online guide that I referenced in the course of my tour. Wonder of wonders! I could capture the images and save them to my photo library! I could also block and copy the narrative. Therefore, I have done precisely those two things in order to give you a virtual taste of what I experienced today.

I will apologize in advance that there may be too much detail in the narratives, but I felt that too much was better than not enough. You can skip over and page through as you wish. Really, the images are what matter most. Also, the translation to English is imperfect. The “typos“are not of my creation:

“The kings of León collected an important treasure thanks to the Canons of the monastery that have last to nowadays. One of the most important pieces is “the Ivory casket” made in 1059. It was the Reliquary Box of St John the Baptist and St Pelagius.”

“It was made here in Leon because the King Fernando the first and the queen Sancha created here one of the best workshops of ivory in Europe at that time. You can notice how ivory is carved with great detail.”

“This casket was coated with gold also disappeared in the nineteenth century (looted by Napoleon’s troops) and inside is also coated with Arab embroidery. King Ferdinand the First sent for the relics of Saint Isidore of Seville to consecrate the Church under his patronage in 1063. To transport the relic he commanded to do this casket. It has a wood core covered in sheet silver and gilder silver with reliefs on some sheets, special scenes of Paradise. We can see the history of Adam and Eve. The lining of the lid is an Arabian embroidery with figures of birds and quadrupeds, while the body of the box is lined with Andalusian cloth.”

“Another casket came from Limoges. This city in the middle of the 12th Century is known because of the art of enamels. It resembles a cruciform church showing Christ on the Cross and his Majesty, Mary and John, the Trinity, angels and Apostles.”

“The chest is made of wood (oak) and is coated with 17 copper sheets. The blue is made of cobalt oxide, then they add glass powder and all of them gets into an oven at high temperature. This casket reproduces the shape of a temple gabled roof with the cruise.”

“The Royal Pantheon is a marvellous place wellknown as “The Sistine Chapel of the Romanesque Art”.

“Here lie 33 members of the Leonese Court, 11 kings, 12 queens, 10 infantes (princes) and 9 counts, together with a number of nobles. The building of the place was ordered by the King Ferdinand the 1st and the Queen Sancha.”

“In the 12th Century there was an important scriptorium (library) in Saint Isidoro. It was conducted by Saint Martino, a canon of the monastery and a pilgrim who travelled all over the world. His remains are inside a chapel of the Basilica.

“Here is a collection of more than 809 historical documents of different types (royal documents, Pope documents, religious or private ones).”

“The jewel of the library is this codex one of the rarest codices in the world. It is a Visigothic-Mozarabic Bible. The colophon tells us that was the work of Florencius and Sancho in 960. It is composed by 514 parchment leaves.”

“The preservation is perfect, no missing leaf, and inside, the colors of the thumbnails still retain vivid. It has more than a hundred thumbnails that represent scenes of the Old Testament.”

“It is called Mozarabic Bible because the monks who made it were mozarabic, they were Christian buts their habits and traditions were Arabians, because they came from the south of Spain, Al-Andalus. That is why the Bible is written in latin language, but the marginal notes are written in Arabic.”

The Chalice of Doña Urraca. Perhaps the “Holy Grail?

“Doña Urraca, the donor of the (jewels set into the chalice) was Fernando I and Sancha’s daughter, was Dómina (ladyship) del Infantado of León and later Lady of Zamora. It was an institution that permits women to have their own goods and properties while they did not get married. They were powerful women.”

“She is well known and appears in the epic poem “Cantar de Mio Cid”. She was very important for the Kingdom of Leon’s legitimacy. Her remains rest in our Royal Pantheon.”

“The body of the Chalice is formed by 2 cups of eastern Roman onyx or agate one for the drinking vessel and one for the base dated in the first century.”

“These Roman pieces were decorated by Doña Urraca with her finest jewels and precious stones and she gave them the shape of a Chalice.”

“The decoration is made of gold, silver gilt, precious stones like amethysts and emeralds, seed pearls and a human face made of glass paste which has been considered a Roman cameo. The nail knot has green cabochons pearls, sapphires and emeralds. All this is by crimping with a golden filigree and topped by leaves and stems.”

“In the bottom of the knot, there is an inscription on golden strand saying: “IN NOMINE D (OMI) NI VRRACCA FREDINA (N) DI” On behalf of the Lord, Urraca from Fernando.”

“The interest of the media about this work of art was triggered by the publication of the research carried out by PhD. Margarita Torres Sevilla and PhD. José Miguel Ortega del Río ‘The Kings of the Grail: Tracing the Historic Journey of the Holy Grail from Jerusalem to Spain’ Michael O’Mara Books Ltd (16th April 2015). From the aforementioned research it is derived that the Roman bowl decorated to form this chalice was venerated since S.IV AD (the AD 300’s) in all Christendom as the goblet which Christ used in His Last Supper.”

“The Holy Grail was in the Saint sepulcher of Jerusalem from the 4th Century to the year 1009 when the city was sacked by Al-Hakam. The researchers found two documents dated in the 11th Century kept in the Library of al-Azhar in the Cairo. The documents tell that there was a great famine in Egypt because of the dryness. The Calif Al-Mutansir asks for aid to the muslim’s kingdoms. The Emir of Denia, a little kingdom near Alicante sent boats with food.”

“To thank his gesture, the Calif of Egypt gave to the emir of Denia different gifts. Among all of them he gave him the two onyx cups that compose this chalice. During the journey a small piece of onyx was cut with a small knife. We can see the missing part in the upper vessel.”

“The Kingdom of León had one of the most powerful kings of Christianity, Fernando the 1st, at that time he was attacking the city of Valencia. So the emir of Denia, gave the vessels as a gift to Fernando the 1st in order to get on well with him and not to be attacked.”

“The other document found in the Cairo, tell us that in the 12th Century Sultan Saladin ask for the piece that had been cut of the vessel in order to cure his daughter that was ill. At that time, people considered these relics to have special powers.”

“We wonder if Urraca enriched the piece with her personal finest jewels, knew or not that the relic was one of the most important relics of Christianity.”

So Christine, did you get all that? Pretty darn fascinating.

Our friend Joe messaged how impressed he was with the beauty of the cathedral. I decided to return and focus my attention on better photographic resolution of the stained-glass.

I’m pleased with the results, although I really do think my camera is on it’s last legs.

I leave tomorrow for Burgos, home of another monumental cathedral. Religious or not, spiritual or not, it would take a very hard heart not to be moved by the dedication and devotion of those who built these magnificent structures and worshiped within their walls.

Safe travels tomorrow. By the time that you read this missive, you and I will be in the same time zone. Love You, Me.

PS. Thank you for your encouragement and support. While I expected nothing less, I don’t take it for granted. I have gone forward with messages to both.