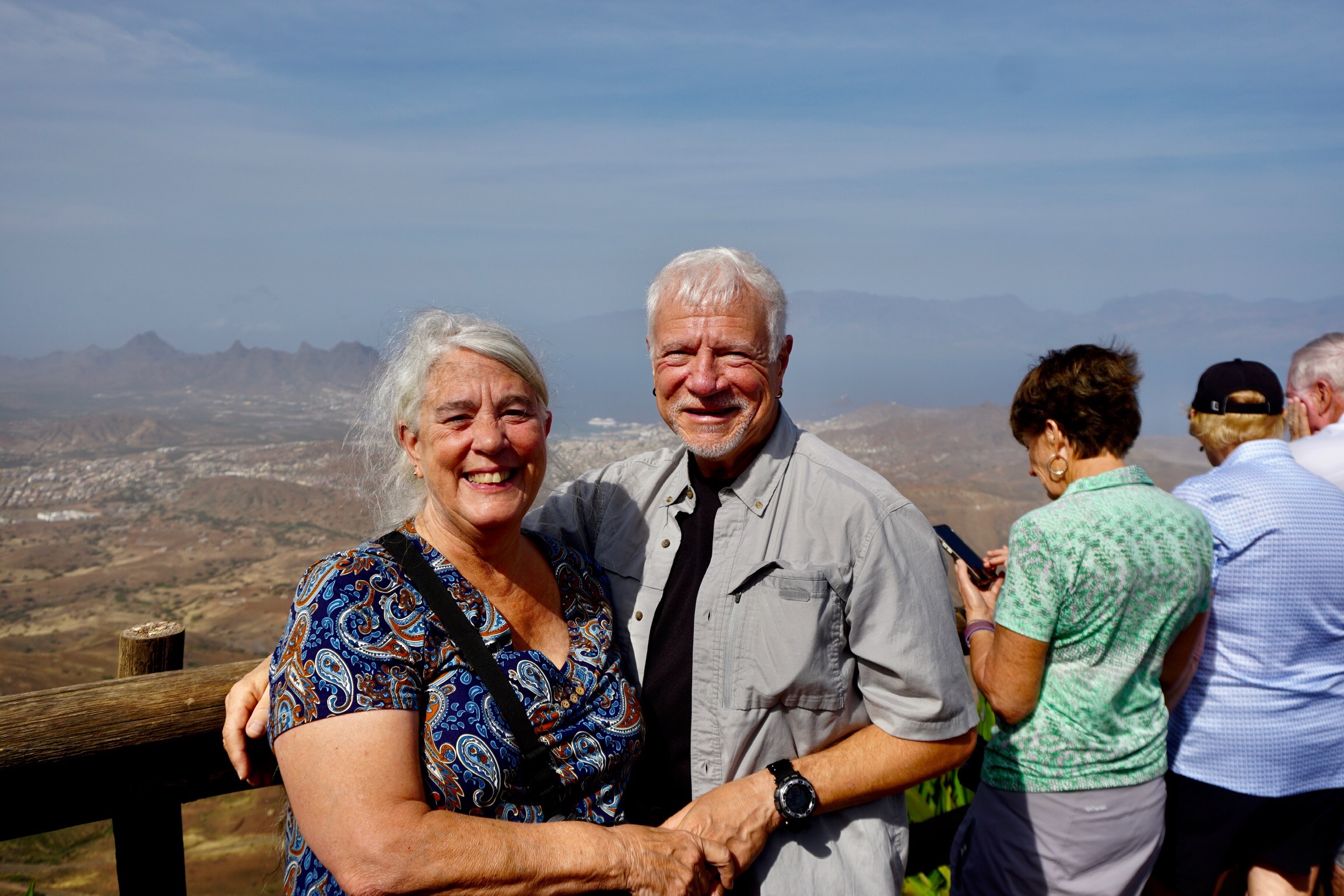 Our original cruise itinerary had us arriving in Dakar, Senegal on November 18th. In the exercise of prudence, Viking determined that political and port issues warranted an alternative destination. Approximately 400 miles to the west is the archipelago of Cape Verde, a group of 10 volcanic islands, which are the western most point of Africa. Mindelo, the capital of its island of Sao Vicente, became our substitute destination.

Sunrise and first sighting of land, as seen from our balcony, were dramatic.

The harbor gave an immediate impression of being “3rd World“. A bit of Internet research confirmed the impression. The Cape Verde islands were uninhabited until discovered by Portugal in the 15th Century. The islands remained a Portuguese territory until they obtained their independence in 1975. This was a thriving economic region until the 19th century, largely due to its convenience as a cross oceanic stopover, and sadly also due to the slave trade. These islands were also popular hiding and hunting grounds for pirates and privateers.

The suppression of slavery in the 19th century brought economic collapse. Cape Verde has since gradually recovered, again due to its importance as a commercial center and stopover point on major shipping routes. Nevertheless, the country and its population are relatively poor by European and North American standards. Per capita average annual income is less than $8,000.

Viking offered four different shore excursions. Christine and I opted for the one that was “included“, meaning there was no additional expense. It was advertised as a three hour bus tour through the island and was deemed “easy“.

Physically, that was probably true for most of the participants. In my book it’s still qualified as an “adventure“.

This was primarily due to the narrow, winding, and precipitous cliff roads that took our mini-bus to the island’s highest point, Monte Verde, 2,440 feet in elevation above the harbor.

At the top of Monte Verde we enjoyed panorama views of the 10 by 15 mile island and some sampling of the islands 80 proof rum-like beverages.

Adventure can come in many forms, including a visit to the bathroom.

Our tour guide held court and offered much local knowledge not otherwise available on Wikipedia or Google.

On the opposite side of the island from our ship we visited a “ghost town“. It is a village built by well-to-do Europeans and North Americans who visit only seasonally. The rest of the year their homes, deemed very upscale by local standards, remain locked up. This village also hosts an annual music festival. In the year preceding Covid the festival drew over 60,000 visitors.

The island of Sao Vicente has a desert climate. With the exception of the mountain top, it averages less than 5 inches of rain a year. With no lakes or rivers all water is either derived by rain storage or desalination. We drove by a small area where there were palm trees present. Our guide advised that this was the most fertile area on the island. It’s still looked like a desert.

Agriculture is only pursued at the subsistence level. However, we observed some young men herding goats.

Along the eastern shore of the island were large sand dunes. We were invited to take handfuls of the sand to feel its texture. It was more like dust than granular sand. The guide explained that these dunes resulted from high winds that occasionally blew across the Sahara desert, depositing dust from the Sahara onto the east shore of the island.

There was a initial concern among some passengers that this substitute venue would be disappointing. On the contrary, Christine and I found the experience to be enriching and adventurous. We departed Sao Vicente shortly before sunset. Ahead of us are four at-sea days. We are scheduled to make landfall in Brazil on the west side of the Atlantic on November 23rd. We also are excited for the crossing of the equator which should occur the evening of November 21st.

PS. While out and about on deck we encountered a couple enjoying their lunch. What immediately caught my eye was the woman’s cap. It bore symbols from the Camino de Santiago. We stopped to visit and I explained that I had just completed walking the Portuguese Coastal route before embarking on the Viking cruise. Barbara and Jim shared that they had twice walked the Camino from Leon, Spain to Santiago. The last time that they hiked the 150+ miles was five years ago. Jim added that Barbara is looking forward to walking next year when she turns 90! Buen Camino to Jim and Barbara who are from Savannah, Georgia.