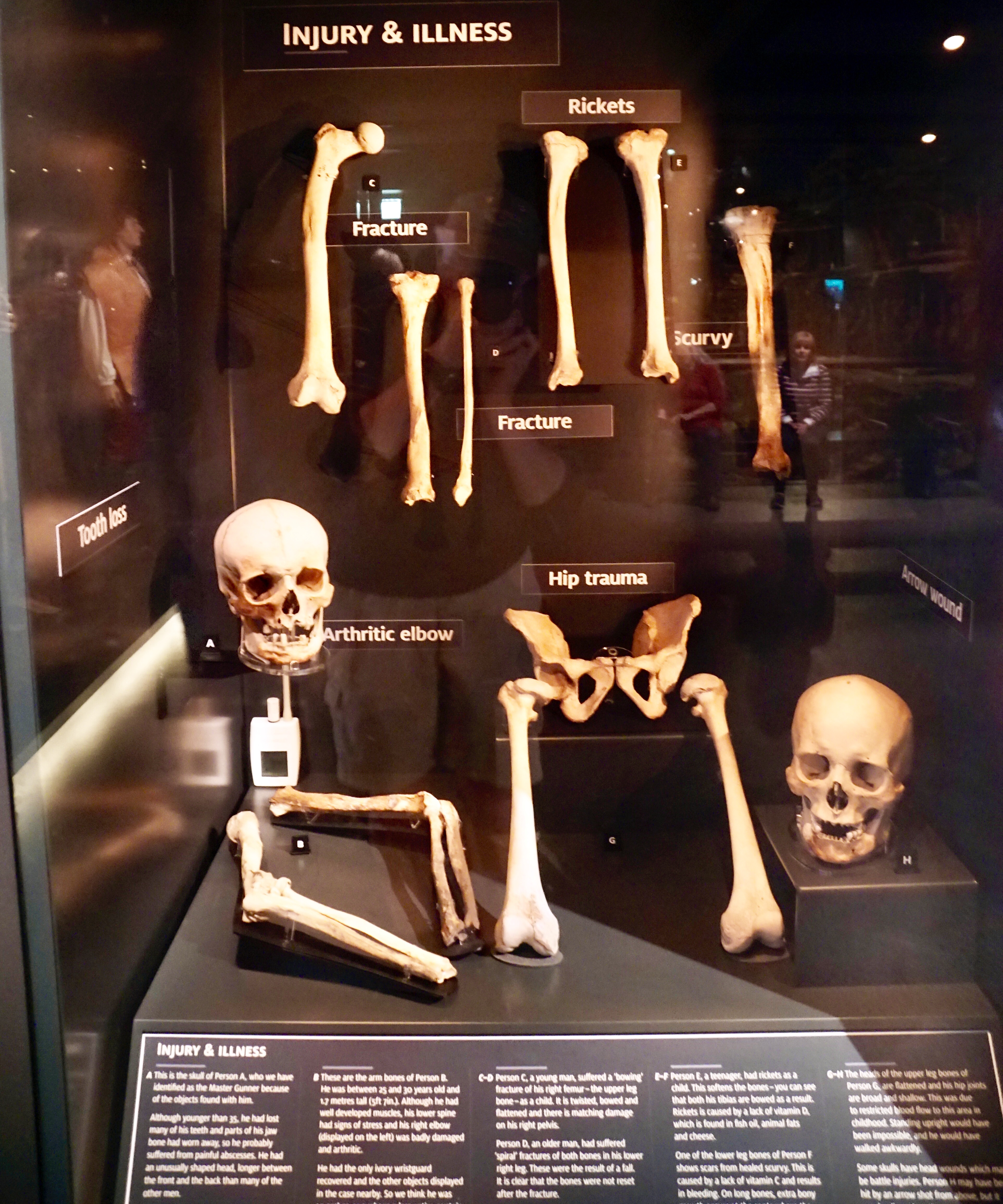 In planning this trip I looked forward to spending a day in historical Portsmouth Harbor. The wharves feature a number of museums and attractions. However, for me there were but three items of interest and each was a battleship considered a creation of the “cutting edge” technology of its time. They were King Henry VIII’s 16th Century “Mary Rose”, Admiral Horatio Nelson’s 1805 flagship “Victory”, and Queen Victoria’s 1860 ironclad, the “Warrior”. It was remarkable to see the strides in defense and lethality that were made in the years separating each of these leviathans. It was just as remarkable that these vessels lay within a few hundred feet of each other.

She was launched from Portsmouth England in 1511 as a part of young King Henry VIII’s efforts to expand his navy and project his power across the oceans.

She carried up to 91 cannon and was manned by a combination of approximately 500 sailors and marines. It is estimated that her construction required over 600 large oak trees, the equivalent of a 40 acre forest. Some of these trees (such as those required for the masts) would be difficult if not impossible to secure today.

She was approximately 40 feet wide at the beam and her keel was over 100 feet long, although she was certainly much longer overall. The exact dimensions have been lost to history.

The Mary Rose would have been one of the earliest ships capable of attack by a cannon broadside. However her primary offense remained the tried and true technique of close, grapple, and board the enemy ship. Heavy reliance was still placed upon longbow archers firing from raised platforms at the ends of the ship. The English longbow archer was able to accurately fire up to 15 arrows a minute at the enemy from 200 yards!

In 1545 the Mary Rose sank in battle, not because of enemy action but because a gust of wind caught her sails immediately after she launched a broadside. The ship heeled over and the open gun ports allowed water to rush in. She sank within minutes, taking all but 35 of her crew to an unmarked watery grave.

In 1836 an early deep-sea diver was hired by fishermen to investigate a hazard that was snagging their nets. He uncovered the first signs of Mary Rose seen in nearly 300 years. She remained undisturbed for another 150 years before serious salvage efforts were undertaken in the 1970’s. That ocean salvage operation remains the most expensive and difficult ever undertaken.

Most of the Mary Rose was consumed by rot and sea creatures. However a significant portion of her hull, stores, and the remains of 179 of her crew were recovered. The excavation was so complete that even the bones of a rat and the ship’s dog were preserved and cataloged.

Forensic examinations determined all the crew were male, the youngest being age 10 and the oldest over 60. Facial reconstructions were accomplished of a number of the crew. Human remains, including a complete skeleton are displayed.

The main efforts to raise the ship occurred between 1979 and 1982, involving over 500 volunteers and over 22,000 dive hours. Even the Prince of Wales personally participated in dives on the wreck. Her preservation out of the water was to then take another 34 years. In all over 26,000 items have been secured, cataloged, and preserved. Dives continue to this day recovering more artifacts of the vessel. She is considered a national treasure and is on display in a high-tech environment that utilizes temperature and humidity controls and holographic imaging.

Significant to the experience, everything on display is an original artifact and not a replica.

Next, Nelson’s flagship, Victory. Until then…