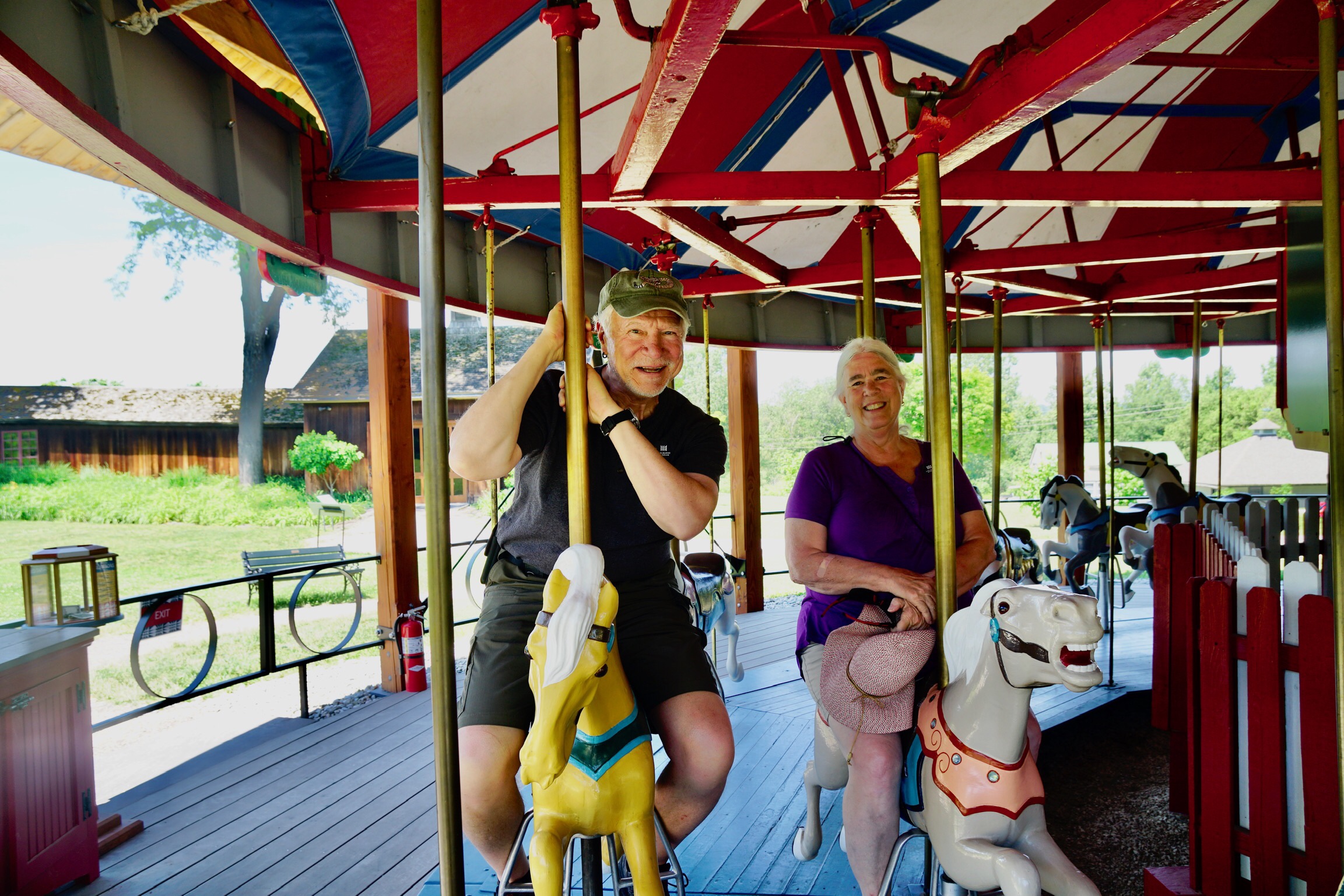 June 27, 2022. My previous post introduced you to the remarkable Shelburne Museum located in Shelburne, Vermont. Let me emphasize that it is truly world class, and remarkable.

For details about its founding, history, scope, and how we happened upon it, please go the the previous post.

The Remarkable Shelburne Museum, Part One

Within the Shelburne’s grounds were two sites that are deserving of separate treatment. The first of these is the Carousel and Circus Building.

The restored vintage Carousel is great fun for young and old alike. The attendant remarked that adults seem to be more excited to ride it than the little ones.

Standing alone it is a pleasant diversion, but it really sets the stage for the entry into the Circus Building.

This 500 foot long, narrow, horseshoe shaped structure houses the life work of two men and artifacts from the glory days of the Circus.

Railroad brakeman Edgar Kirk set to create a special toy for his 4 children, “The Kirk Circus”.

In 1910, using his penknife, he began to carve figures that became the performers, audience, and “Big Top” of his circus. His passion became near obsession. 46 years later “The Kirk Circus” had grown to over 3,500 figures of amazing detail. His children long outgrown toys, Edgar would occasionally “bring the circus” to his backyard to the delight of children and adults alike.

This phenomenal exhibit, located at the start of the Circus Building, was acquired by the Museum in 1981.

As amazing as Edgar Kirk’s work is, it is but a shadow to what one next experiences in the gallery.

As a child, Roy Arnold loved circus parades. His love carried into adulthood so much so that between 1925 and 1955 he, along with the assistance of 5 others, hand carved and recreated the circus parades of his youth.

Rendered in a scale of one-inch equals a foot, his scale model is over 525 feet long, includes nearly 4,000 pieces, and is the equivalent of a parade over two miles long.

The wagons, carriages, and cages are fully functional in every important detail.

On the wall opposite to this singular parade are actual 19th and early 20th Century circus artifacts. These include signboards, wood sculptures, and restored carousel creatures.

The steamship Ticonderoga was launched from the Shelburne shipyards in 1906. She measured 220 feet long with a beam of nearly 60 feet.

This Lake Champlain behemoth had a displacement (weight) of nearly 2 million pounds. She sailed the lake for 48 years. At her retirement this side-wheel “walking beam” steamship of a bygone era was destined for the scrapheap, until she was brought to the attention of and purchased by Electra Havemeyer Webb.

That is only the beginning of the story. How does one move a 200+ foot, 2 million pound ship, more than two miles overland to her final destination for restoration and exhibit? Where there is a will (and a LOT of money) there is a way.

Planning, engineering, and execution took over a year. The actual move, covering over 2 miles of ground, took 3 months.

A huge dry lagoon pit was excavated near where the Ticonderoga was at dock. Only a dike separated the pit from the waters of Lake Champlain. Within the pit two sets of precisely laid railroad tracks were set in parallel. These four rails were supported by a special bed of ties, designed to support the load of the ship and carriage upon which the vessel would travel. Rails and carriage in place, the dike was breached to allow the pit to flood over the tracks and carriage. Ticonderoga was then brought into the lagoon, afloat over the now submerged structures. With extreme care and precision the waters were pumped out after the dike was restored. Any failure to accurately center the ship would have been disastrous. The ship came to rest only a quarter inch off center, at which point her hull was welded to the carriage.

Due to her extreme size and weight the move could only occur over frozen ground. Tracks were set and removed as she moved across farms, forest and fields. Utilities had to be temporarily rerouted as she passed, and at one point a temporary trestle had to be constructed so she could pass over an active rail line. The move and restoration of the Ticonderoga stands as one of the most significant achievements of its kind, certainly on par with the recovery of King Henry VIII’s flagship, the Mary Rose. Here is a link to that “tale”:

Ticonderoga achieved the status in 1960 as a National Historic Site. Virtually the entire ship is open to the public.

From the engine room and crew quarters,

To the Captain’s quarters and Pilot House.

Primarily engaged for day-sailing, there were only 5 staterooms.

The dining room, passenger promenade deck, and grand staircase were all of the highest order and finish.

Ticonderoga was a “walking beam” side wheel steam driven ship, a 19th Century design. Her two huge boilers, kept fed by two men shoveling from 28 tons of onboard coal, could propel her at a top speed of over 20 mph. Sheconsuming coal at the rate of two tons per hour.

The Shelburne Museum ranks as one of our finest “on-the-fly” finds. We hope to return some day to finish our tour of this remarkable museum.

PS. Our campground for the nights of January 26 and 27 was Vermont’s Allis State Park. Named after Wallace Steele Allis (1859-1935), he donated his farm atop Bear Hill to the State in 1928 to preserve its beauty for the benefit of future generations. Allis State Park was Vermont’s second State Park, and was developed by the Civilian Conservation Corps in the 1930’s.

Prominent in the Park is a 6 story fire tower once used by the US Forest Service to spot forest fires.

It is open for the those daring enough to climb its near open staircase. The reward is an amazing view that in the far distance even includes New Hampshire’s highest peak, 6,288 foot Mount Washington.

Another benefit was cell coverage that helped me to upload some of these images.

Below are manicured picnic grounds, a 1930’s era shelter, and to our surprise and delight a storyboard of pages taken from the cutest of children’s tales.

We happily shared our campfire each night with one of the Park Rangers, David on the first night and Ashland on the second. I can’t express how satisfying and rewarding it is to share such time in passing with new friends.