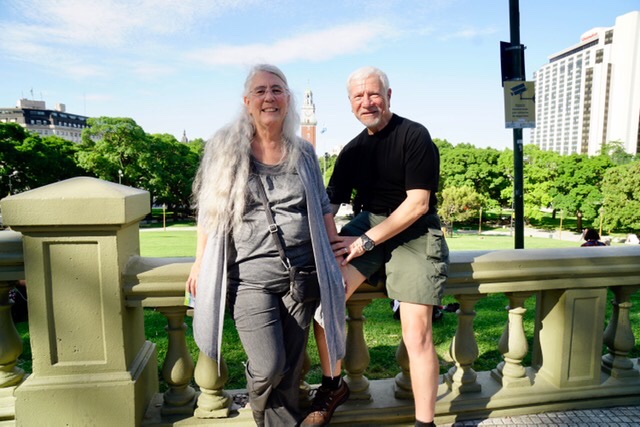 It should come as no surprise that I like to travel… a lot. I also hate getting ready to travel… a lot. For at least a week before departure I consciously and subconsciously stress about what to pack, what arrangements I need to make, and the myriad of minutia that is fostered by my compulsive nature. A few nights ago I awoke in a cold sweat thinking, “Visas, what about VISAS!!!” 3 a.m. I was up and at the computer verifying what I no-doubt verified months ago, all we need is our passports for the 4 countries we will be visiting. Next night, “DAMN, forgot to order currency!” Email to our bank and double damn, it’s Veterans Day and the bank is closed. The reality is, no big deal. International destination airports have almost as many currency exchanges as Starbucks coffee bars. Like Starbucks, you pay a premium for the airport location.

It was easier for us to pack for our 6 week UK trip earlier this year (and for that matter last year’s 13 week/16 country trip) than for this one. We didn’t have to worry about a wide ranging climate and in both cases a backpack worked well for each of us. Not so for this coming 4 weeks. Buenos Aires had temps in the low 90’s this week and Santiago Chile at the end of our trip is likewise on the warm side. However, the Falkland Islands and the southern reaches of the continent can experience temperatures into the 30’s with snow flurries. What’s more, dinner on the ship, while not a tuxedo affair, does warrant a nicer wardrobe than is my usual style. Christine and I had an array of clothes spread all over our guest room as we attempted to plan accordingly. We succeeded in packing into a carryon for each of us and one checked bag. For us, that’s a lot.

The next part of travel that I hate almost enough to dissuade me from the journey is the whole airport/departure/flight/arrival/airport sequence. This time we flew American Airlines. The originating flight was less than 2 hours from Kansas City to Dallas.

The main event was a grueling 10+ hours in the narrowest cabin seats that I have ever experienced. Earlier I had sprung for an “upgrade” (more legroom with the bulkhead in front of us), but we had hoped to snag a business class/1st class upgrade at the gate… no such luck, the flight was sold out and we were packed like sardines.

Sharing our 4 across center section was every flight attendant’s nightmare. He was a passenger so rude, offensive, and LOUD (even before we left the gate), that as we were taxiing for takeoff the flight purser wandered back and threaten to have the pilot return to the gate where other authorities could address his “concerns”. The passenger was sober and clearly had “issues”, but a lack of intellect was not among them. He wisely shut up and buried himself in his book the rest of the flight, “The Brothers Karamazov” by Fyodor Dostoevsky.

Since you are reading this you may infer that we survived the flight. We arrived on time at Ministro Pistarini International Airport, an ultra-modern facility located on the outskirts of Buenos Aires. I had previously arranged for transport to our hotel which is located in the central city. The 45 minute drive featured a 10 lane toll highway. At one point there were 40 tollbooths across the lanes to (unsuccessfully) minimize congestion. We experienced professional grade rush hour traffic at 10 a.m..

The driver got us to the hotel in one piece and the Recoleta Grand Hotel accommodated us with an early check-in and a top notch room at only $130.00 US a night.

It is a bit past noon. I had some success in grabbing enough sleep on our overnight flight but not so Christine. She is taking a catchup nap after which we will head out to reconnoiter the immediate area of our hotel. More Later.

It is much later. We had a wonderful afternoon aimlessly wandering the central city. Lunch was at a sidewalk French restaurant where Christine enjoyed a tortilla con jamon et queso (ham and cheese). I had a pizza. Go figure.

My camera was evident and on three separate occasions I was warned by locals to secure it against theft. While walked we observed a young teen attempt to snatch a purse, and a police incident that seemed to center around a petty theft.

We have often been asked by friends about the risk of crime in the places we have traveled. Vigilance is the first order of protection and not taking unnecessary risks is the second. Also, to put matters into a sad perspective: Kansas City has a population that is just under 500,000. Buenos Aires has nearly 3 million. In 2017 (the last year I could secure statistics on) Buenos Aires had 144 homicides. That same year Kansas City Missouri (not metro area) had 151.

Our walk took in some of the idyllic life of the city.

We encountered a monstrous 250 year old “rubber” tree, a statue of San Martin, Argentina’s 1815 version of George Washington, and some beautiful parklands. Our plan for tomorrow is to take a “hop on hop off” bus that covers most of the best known features and sites of the city.

This evening we adjourned to a very well regarded Argentinian steak restaurant. It was recommended by our hotel and Trip Advisor placed it as number 3 out of nearly 6,000 dining venues in the city.

We were not disappointed. Christine declared her filet to be the finest cut of meat that she has ever been served. We arrived just after opening time, and within 30 minutes the place was packed. In turn, the restaurant was “packing” its customers with the best of succulent animal protean. Vegetarians need not apply.

The servings were beyond generous and the price was remarkably easy on the wallet. Our meal consisting of a bottle of a fine red wine, two steak dinners, sides, salads, and coffee came in at a little over $50, tip included! Christine’s steak alone would have cost that back home.

The currency here is the Argentine Peso. They use a dollar sign as the symbol for the peso, but the exchange rate is about 60 pesos to one US dollar. It takes a bit of adjusting to see the ice cream vendor in the park hawking ice cream bars for “$30” (fifty cents US), or “$700” for our bottle of wine (about twelve dollars US).

It is 11:15 p.m. (8:15 p.m. in Kansas City) as I wrap this up. Sleep in a king size bed will be especially welcome, especially after the challenges of last night.

PS. I’m experimenting with using smaller format images for uploading with these posts. It saves on international data charges, loads much faster, and (I hope) does not noticeably impact on the quality of the image viewed on devices. Fingers are crossed. Pete.