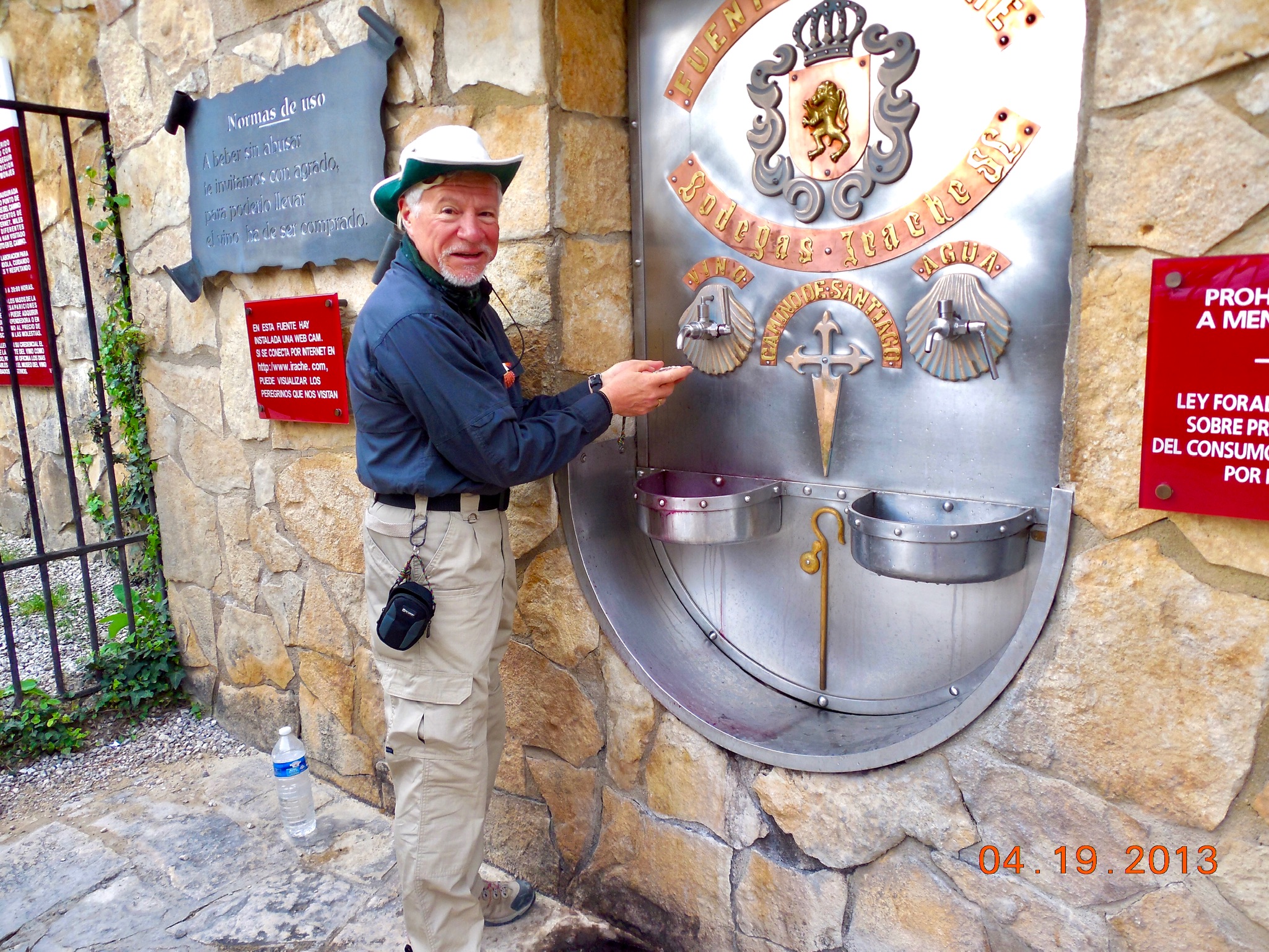 There was a threat of rain in the early morning clouds. Covering my pack and having my rain poncho at the ready seemed prudent as I set off for the day.

The recommended stage that day was 21km to Los Arcos with services available in between only at Villamayor de Monjardin (pop. 150), 10km distant. Christine had not been feeling well and was fighting an annoying cough that threatened to deepen. We decided that she would taxi to Villamayor and secure our beds for the night at one of the small village’s two albergues.

On my way out of Estella I stopped at a charming courtyard café where I and many other pilgrims found coffee and breakfast.

The threat of rain hung in the air most of that morning but never materialized. The alternating light and shadow of the passing clouds played beautifully over the verdant spring countryside. It was a good day for a less strenuous hike and my early arrival in Villamayor was assured.

About 2km down the road I came to the Bodegas Irache and its famous wine fountain. Over the years the winery has generously furnished passing pilgrims with two taps in a burnished stainless steel facade mounted on the side of the winery. One tap fresh water, and remarkably the other providing delicious red wine at no cost.

Pilgrims lined up at the wine tap, early morning be damned. I swear that the water tap had cobwebs. Here was a place that pilgrims could congregate and toast their good fortune. I was among them. One could fill a water bottle to the brim with the deep purple stuff (I mixed half water and half wine in mine). However, the accepted tradition was to take a drink using one’s scallop shell as a shallow wine cup, much as pilgrims have done since the Middle Ages.

Here I became acquainted with Lene Frydenlund of Denmark, and Roberto Del Pino Guzman, originally from Spain but decades a citizen of the United Kingdom. We have maintained contact with both over the years.

I learned later that day that Roberto had met Christine at the albergue in Pamplona. She gave him instructions on how to operate the front loading wash machines there.

I spent that morning walking to Villamayor with Roberto and his friend John. Our conversation quickly went deep into the mysteries of life, love, faith, and fate. With Roberto I found a kindred spirit. Were we not separated by an ocean I believe we would have been best friends.

Other than the scenery, there was little between Estella and Villamayor save a few hundred yards from our destination we came upon the Fuente de los Moros (Fountain of the Moors).

It is a curious name since the fountain, constructed in the 1100’s after the expulsion of the Moors, was built as a welcoming rest stop for passing pilgrims. Here a pilgrim could cool off, wash, and replenish their water.

I arrived in town with a number of other pilgrims long before either albergue allowed entrance. Where was Christine? At the sound of my voice the door to the Albergue Santa Cruz opened and there she stood alongside of the facility’s smiling matron.

Christine explained: She had arrived early by taxi and went to the door of the albergue to place us on their list for beds that night. The woman who answered the door spoke little English, but accommodated Christine’s request. Chris noticed that the woman was fully occupied with the task of washing a mountain of bed linens and towels for the 28 bed albergue. Christine managed to communicate her willingness to help. The woman, first surprised and then beaming with gratitude, turned to her husband who was seated at a table reading his newspaper. Pointing at him and the then at Chris she made an exclamation that Christine believes translated to “See!!!”. The man returned to his paper. The women spent the next hours side by side sharing smiles and toil.

Christine neither asked for nor expected a reward. However, once the laundry was finished the woman took her by the hand to a door on the second floor. She unlocked to door and ushering Chris into the small room, managing to communicate that Chris and I would be granted the private room for the night. Still bunkbeds but glorious privacy and with our own private bath and shower no less!

After the albergue had granted pilgrims entrance we secured our things inside. All of us then adjourned to the nearby restaurant/bar just up the hill.

Outside the bar was a small courtyard overlooking the town. It featured the bronze bust of King Sancho I (860-925) who reigned over the Kingdom of Pamplona from 905 to his death in 925.

The bust cast eyes upward to castle ruins that loomed 700 feet above the town.

Castillo de San Esteban (Castle of St. Stephen) held prominence over the entire region since the time of the Romans who laid the fortification’s original foundations. Given the commanding presence of the mountain upon which it stood it is likely that it had been a place of tribal defense since the time of ancient paleo inhabitants.

Sancho successfully captured the castle from the Moors in the 10th Century, they in turn had captured it from the Visigoths, who had taken it from the Romans. Successions spanning millennia.

Inside of the bar we were confronted with one man’s tribute to Elvis Presley and life on America’s Route 66. The walls were covered with memorabilia. The bar owner spoke excellent English and quickly served our beverages. I asked him about the castle… Can one tour it? “Yes when its open”. Now? “Yes, if you have the key to open it”. A key? “Yes, locks open best that way”. I was becoming aware that the gentleman was having some fun at my expense. Snickers from the other pilgrims confirmed this.

How does one get the key? “Well, you must ask for it.” (Me growing frustrated) And who do you ask? “Me, of course!” YOU HAVE THE KEY TO THE CASTLE? “Didn’t I just say that?” (grrrr!) Well then, may I borrow your key? “Certainly, provided that you bring it back”. With that he reached behind the bar and retrieved a ring with a large brass key. How do I get to the castle? “Walking works”. Yes, but which way? “If you keep walking uphill you will get to the castle. (Pilgrims are now on the verge of outright laughter). Finally he relented and directed me to a small avenue behind the bar. “Follow it, it is a steep 2km to the top and enjoy the view.”

45 minutes later I stood alone at the gate to the abandoned castle, keys in hand. Locks do work best with a proper key and this one was no exception. I entered.

The castle walls are largely intact, but most of the castle’s keep and interior stonework had been looted in the 1600’s to build a nearby hermitage. It was reputed that the remains of Sancho were entombed and hidden somewhere within the castle walls. I stood with Sancho’s ghost.

Sancho and I were not alone. I provided eyes for the spirits of long forgotten paleo tribal leaders, dead Roman generals, ancient Visigoth chiefs, invisible Moors, and Sancho, all of whom had gazed upon the surrounding plains as I now did.

It was eerie and invigorating. I took my pictures, embraced silence that was broken only by the wind whistling through the fortifications… (were those voices?), and finally with regret I made my way back to the village below.

We gloried in yet another communal dinner with our new friends that included Deb, along with Kalina and Ramona, pilgrims from Germany. There was no laughter, only rapt attention as I spun my tale of the castle above.